Biological models that depend on molecular recognition are woefully incomplete 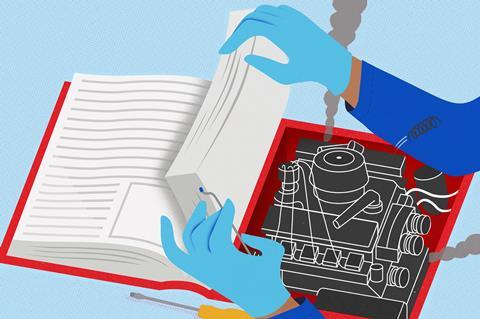 It’s a truism that life happens through chemistry. Judging from recent Nobel prizes, a molecular explanation of how cells, tissues and organisms work is deemed one of chemistry’s principal challenges. We know the answer is complicated, but there is often said to be a common central principle: the exquisite ability of biomolecules to recognise and bind to one another selectively from the morasses of molecular components moving stochastically around a cell. In this story, the choosy handshakes of molecular recognition create well-defined pathways along which information can be reliably transferred to create what Nobel laureate François Jacob called the logic of life.1

You have probably seen those dizzyingly complicated schematic diagrams meant to represent the signal transduction pathways by which cells signal to one another and respond to their environments, where the signal is routed via a precise sequence of molecular exchanges. Among the most important of these signalling processes are protein kinase cascades, in which a signal from outside the cell – the binding of a growth factor to a membrane protein, say – initiates a sequence of reactions in which kinase enzymes mediate the transfer of phosphates to others.

There’s little doubt that this picture of life’s chemistry as sequences of molecular interactions governed by recognition contains something of the truth. But increasingly, it seems to have mutated from a convenient way of summarising experimental results to a presumed literal picture of what molecules in cells do. It has encouraged the view of cells and their components as machines, interlocking and transmitting influences in linear fashion much like cogs and crankshafts. You only need to look at some of those seductively delightful animations of the cell’s ‘molecular machinery’ at work to see what is wrong. In comes a protein, latches onto its partner, does its job and shoots off again. It’s sheer teleology – and in chemical terms, absurd.

There are plenty of empirical reasons to doubt this picture too. For example, many cancer drugs have been developed to disrupt a kinase pathway thought to be essential for cell division, so as to stop cancer cells from proliferating – but turn out to have no useful effect at all.2 Ah, comes the explanation: the cells just activate another pathway instead. But this imputes an agency that doesn’t exist at the molecular level.

A particular problem for the molecular-recognition-based account of cellular information management is found in the action of transcription factors, which regulate the expression of genes and are essential to how cells acquire their specialised fates. Many of these are proteins that bind to DNA – but far from being highly selective towards gene sequences, they are often remarkably promiscuous,3 and appear to act collectively in some fashion.4 In fact, most of them are intrinsically disordered proteins, too dynamic and loose in their unbound conformation to be capable of selective recognition anyway.5

Take a look too at how gene regulation seems to involve the packing and unpacking of the DNA-histone composite called chromatin. This again is hugely important for how cells develop specific fates, but very poorly understood. The kinds of mechanisms often depicted involve several different DNA-binding proteins and protein assemblies cooperating with particular configurations of chromatin loops to bring together rather distant parts of the chains.6 To a chemist, a chance encounter of all these elements in a crowded cell, each with only finite binding lifetimes, looks vanishingly unlikely.

So what is going on? One of the current most popular theories of chromatin-based gene regulation proposes that liquid phase separation forms a pool of transcription factors – ‘condensate’ droplets – that contain many of the ingredients that might be needed to activate a particular gene.7 That way, the cell is not at the mercy of the random wandering of individual molecules.

That transcription factors with low binding selectivity might nonetheless exert specific, deterministic effects on gene activity, meanwhile, might be explained by a succession of low-specificity binding events that individually convey little information, but which create a well-defined regulatory microstate via a collective, non-equilibrium process.8,9

It’s going to take a lot more to figure out the detailed molecular schemes that cells use, but already these ideas signify a profound shift that acknowledges the real chemical demands of life. On its own, molecular recognition based on a mechanical matching of parts is a metaphor that is already of limited relevance to the dynamic landscapes of molecules.10 But the bigger picture needs also to admit ways in which stochasticity and dynamic equilibria of molecular binding can be constrained, harnessed and perhaps even used during information transfer.