The morning after the night before

Replacing alcohol with a more benign drug sounds like a great idea, but it faces insurmountable hurdles, says Mark Peplow

For those who nursed a New Year’s hangover, David Nutt, a neuropsychopharmacologist at Imperial College London, has an idea with obvious appeal: an alcohol substitute that promises all of the fun of bacchic revelry without the throbbing head and washing-machine stomach that follow. Let us call it synthehol – a name I’ve borrowed from Star Trek, in which spacefarers explore strange new worlds without the distraction of anything so primitive as a furry tongue.

In November 2013, Nutt suggested that it was ‘well within the grasp of modern neuroscience’ to develop a chemical concoction that packs the punch of punch, while leaving us fresh as a daisy the next day. Even better, an antidote could sequester the drug from our brains, allowing us to sober up in minutes. He has even tried a few prototypes – compounds that target certain neurotransmitter systems in the same way as alcohol – and felt ‘relaxed and sleepily inebriated’. ‘All that is needed now is funding to test and put them on the market,’ he adds. 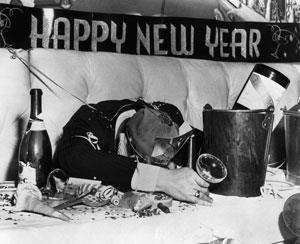 Nutt isn’t really advocating inebriation with impunity – his proposal has healthcare at its heart, by attempting to reduce alcohol consumption. The World Health Organization reckons that alcohol kills about 2.5 million people every year – about 4% of all deaths worldwide – and is a key factor in more than 60 diseases. It is also remarkably addictive – more than 6% of British men are alcohol-dependent, a figure that rises to 16% in Russia.

But synthehol is not going to solve these problems, because it will never make it from the lab to the pub.

Nutt has been making his proposal every year since at least 2009, and is still looking for research funding. If it came from the public purse, the very same newspapers that were breathlessly excited by the prospect of banishing hangovers would quickly proclaim their horror that a university professor has developed a new recreational drug – effectively a ‘legal high’. And the alcohol industry has little interest in the risk and expense of developing and marketing a new drug, because it already has a vast infrastructure dedicated to producing, distributing and marketing a perfectly legal and immensely popular one. It’s a common problem for inventors – often their wonderful new product must fight for market share by displacing the incumbent technology, which is particularly difficult if huge industries have built up around it.

An innocuous intoxicant would certainly have a significant market, so perhaps a brave new start-up might raise enough capital to forge ahead with synthehol. But ‘legal highs’ do not remain legal for long. Overwhelmed by the flood of new drugs, the UK government introduced so-called temporary class drug orders in 2011, so that designer drugs could be banned immediately pending a more formal assessment. Possessing them is not a crime, but they can be seized and destroyed by police – something of a stock control problem for our young company.

A change in regulations could help. Last year, New Zealand introduced new legislation that allows some psychoactive substances – mostly cannabinoid receptor agonists – to be licensed for restricted sale if manufacturers can show they are safe. But the UK is highly unlikely to follow suit.

Nutt suggests that, like e-cigarettes in the tobacco industry, the alcohol industry might develop synthehol as a safer alternative. But as a new chemical entity, synthehol would face far tougher scrutiny than nicotine or alcohol. And if synthehol were instead marketed as an alcohol dependency treatment, the European Medicines Agency (EMA) would expect to see convincing clinical trial data that compared favourably with other pharmaceuticals such as nalmefene, approved by the EMA last year to reduce alcohol cravings. And those data don’t come cheap.

Consumers, too, would want to know that synthehol was entirely safe. Nutt has said that ‘clever molecular modeling’ could help to design out any risk of addiction. But that is a seriously over-optimistic view of the power of in silico methods. Chemists are still a long way from being able to offer meaningful predictions of a compound’s addictiveness based on its structure.

It’s worth remembering that Nutt was ousted as chair of the government’s Advisory Council on the Misuse of Drugs in 2009 after arguing that alcohol was more dangerous than illegal drugs such as LSD and ecstasy. Shortly before the latest round of coverage for his alcohol substitute, he won the 2013 John Maddox Prize for Standing Up for Science for his continued calls for drug law reform.

I applaud Nutt for his efforts to promote evidence-based policymaking. But another round of headlines promising ‘no more hangovers’ is an odd way to foster debate about the dangers of alcohol and the inadequacies of our drug regulatory regime. Don’t expect synthehol to relieve your aching head any time soon.