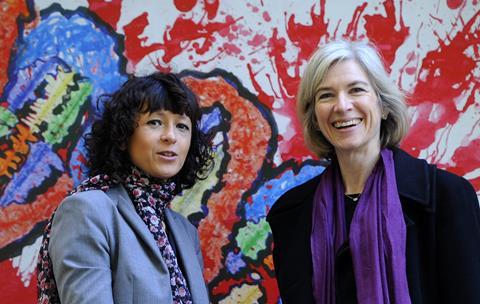 ‘Many have been waiting for it,’ said Pernilla Wittung-Stafshede from the Nobel committee for chemistry about this year’s prize, which went – perhaps unexpectedly – to Jennifer Doudna from the University of California, Berkeley, US, and Emmanuelle Charpentier from the Max Planck Unit for the Science of Pathogens in Germany for developing Crispr–Cas9 genome editing. The gene editing system was discovered just 12 years ago, and these genetic scissors can deactivate genes or introduce new ones in any kind of cell – animal, plant or microorganism.

Tom Welton, president of the Royal Society of Chemistry, calls the prize ‘hugely deserved’. ‘The ability to edit genes provides an incredible toolkit for scientific research that will benefit humankind for generations to come, from fighting and preventing diseases to feeding our growing global population,’ he says.

‘I am also hugely pleased to see that the Nobel committee has chosen to honour two leading women in active research – their teamwork is an example of how scientific breakthroughs are based on a truly global community of researchers and they can become role models for aspiring scientists of all genders,’ Welton adds. In fact, it is the first time that the chemistry Nobel prize has gone to an all-female team. Doudna and Charpentier are also only the sixth and seventh woman to ever be awarded the prize since its inception in 1901.

Doudna and Charpentier’s collaboration, which would lead to their landmark 2012 Science paper, started as they met at a conference in Puerto Rico. In 2006, Charpentier had started investigating clustered regularly interspaced short palindromic repeats (Crispr) – repeated DNA sequences found in microorganisms that are part of an ancient antiviral immune system. Doudna in turn identified Crispr-associated (Cas) genes that encode for proteins able to unwind and cut up viral DNA entering a cell.

When the two women met in 2011, Charpentier had just shown that Streptococcus pyogenes bacteria possess small trans-activating Crispr RNA (tracrRNA) molecules that transform the long RNA stands, made from the Crispr DNA sequence, into their active, virus-targeting form. Doudna and Charpentier went on to show that a combination of Crispr-RNA, tracrRNA and the Cas9 protein can cut up viral DNA. They then simplified the system by combining the Crispr-RNA and tracrRNA into a single molecule called guide RNA. Combined with Cas9, they could now cut any DNA sequence at any point as long as the Crispr part of the guide RNA was selected to match the code where the cuts should be made.

In less than a decade, this extremely effective gene editing tool has seen an explosion of new developments and applications from creating plants that can withstand rising temperatures to the first attempts at curing inherited diseases like haemophilia.

However, ‘the enormous power of this tool means we need to use it with great care’, remarked Claes Gustafsson, chair of this year’s chemistry Nobel committee. Earlier this year, Chinese geneticist He Jiankui was jailed for three years for using Crispr–Cas9 to edit the DNA of human embryos that were then carried to term, reportedly to prevent them from contracting HIV. 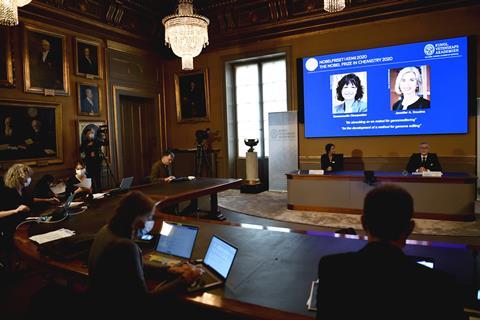 But with sufficient ethical oversight, Crispr has the potential to make a huge impact on the pharmaceutical industry. Both Charpentier and Doudna have launched their own spin-out companies based on Crispr technology. Just yesterday, Doudna’s Scribe Therapeutics announced a $20 million collaboration with Biogen to start work on treatments for amyotrophic lateral sclerosis.

The reason the Nobel committee’s choice surprised many is not only that the discovery is so recent – the prize is usually awarded only several decades after the fact, for instance lithium-ion batteries – but also that Crispr technology is part of an ongoing patent battle.

In 2012, Doudna and Charpentier filed a patent application, followed seven months later by a separate patent application by the Broad Institute’s Feng Zhang, one of the first researchers to show Crispr genome editing in human cell cultures. Both patents were awarded, but Doudna’s University of California, Berkeley, filed an interference procedure in an attempt to get the Broad patents rescinded. So far, both patents have been upheld.

Some people were disappointed not to see a third awardee this year – the prize has gone to three people for the last eight years. Suggestions included Zhang, Crispr sequence discoverer Francisco Mojica and Virginijus Šikšnys who showed the first programmable DNA cleavage using the Cas9 protein.

Gustafsson, however, declined to comment on the question of whether the committee had considered including anyone else in the prize.