The seabirds saved by synthetic chemistry 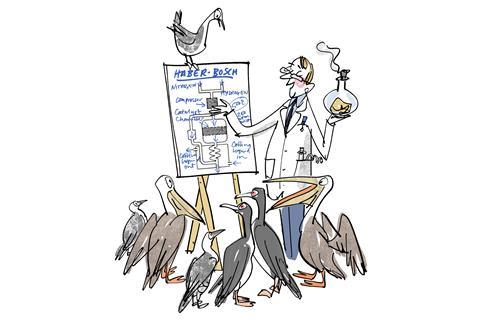 Take note, birds: this is why we’re not destroying your poo mountains anymore

Agriculture was ripe for revolution. Europe’s population had doubled over the 100 years to the mid-19th century and could double again over the next 100 – if food production kept up. A huge increase in the area under cultivation had driven this growth, but land was running out. Farmers needed new tools; they needed new ways to increase agricultural output.

On a farm in Alsace, nestled against the German border, French chemist Jean-Baptiste Boussingault came up with a solution. His experiments had proven beyond doubt that farm output depended on one element above all others. He had seen it in his fields; had measured it in his lab: the more nitrogen he applied, the greater the yield from his crops.

To add nutrients to their soil, farmers relied on the recycling of organic waste. Straw and animal manure – up to 20 tonnes per hectare – were commonly applied to fields around Boussingault’s farm. But food and nonrecycled waste removed nitrogen from the ecosystem and it could only be replenished by rotating high value crops with low-yielding (but nitrogen-producing) legumes. Which led Boussingault to a clear conclusion: to increase productivity, farmers needed to find new sources of nitrogen.

Ten thousand kilometres from Boussingault’s farm, off the coast of Peru, a small group of islands would change agriculture forever. Bathed in the cool flow of the Humboldt Current, the Chincha Islands hosted some of the richest nitrogen deposits in the world. Surrounded by plankton-rich waters supporting huge populations of sardines and anchovies, the islands were home to enormous colonies of seabirds: cormorants, pelicans and boobies. Birds that had, over thousands of years, buried the islands in poo.

Baked solid in the hot, dry climate, these offshore mountains of poo, or guano, shimmered white beneath the tropical sun. Well known to indigenous societies – the name comes from the Quechua language – guano had been traded along the South American coast for generations. But it wasn’t until 1804 that a sample arrived in Europe. Analytical chemists determined that it was almost one quarter uric acid, and 15% nitrogen. A typical cow’s manure was about 0.5% nitrogen.

Readily accessible and packed with bioavailable nitrogen, guano permitted a new form of farming, where intensive application of materials from outside the ecosystem dramatically increased output. Demand, from Britain in particular, was huge. In the period 1840–1880 – also known as the Guano Era – Peru exported more than 13 million tonnes of this pungent but precious commodity. At the same time, Spain fought Peru for control of the Chincha Islands, and the US government, having failed to secure a supply from Peru, passed the Guano Islands Act and granted all US citizens the right to take possession of guano-producing islands.

The birds were slaughtered too, so that they didn’t inconvenience the diggers

Those gripped by guano mania, however, paid little attention to the environment that produced their miracle substance. Over 40 years the Chincha Islands were completely denuded; deposits of guano 60 metres deep entirely devoured. The birds that had produced them were slaughtered too, so that they didn’t inconvenience the diggers. A population estimated at more than 50 million in 1800 was reduced to a few hundred thousand by 1909.

That the seabirds have survived at all on the Chincha Islands – and that their numbers have recovered to more than 4 million – is thanks to synthetic chemistry. The Haber-Bosch process, converting atmospheric nitrogen into ammonia on an industrial scale, ended demand for guano. Almost overnight, bioavailable nitrogen became cheap to buy and unlimited in supply. It permitted a global transformation of agriculture that guano could never have enabled, and the world’s population increased fourfold over the 20th century. Today, 80% of the 180 million tonnes of ammonia produced worldwide goes to agriculture.

For a new generation of chemists and agriscientists, this enormous consumption of ammonia brings new sustainability challenges, and new opportunities for innovation.

The Haber-Bosch process consumes 2% of the world’s energy supply, but in the Oxfordshire countryside the steady thrum of wind turbines signals the production of zero-carbon ammonia in an all-renewable Haber-Bosch plant. We might even one day eliminate the need for such technology altogether, producing ammonia with biocatalysis and nitrogenase enzymes.

Fertiliser use brings environmental challenges too, concentrating nitrogen in bodies of water, but new technologies again offer hope. Data-driven precision agriculture – monitoring plant health by electronic colour sensing, for example – ensures fertiliser is applied only where it is needed. And the identification of genes enhancing nitrogen absorption offers the possibility of new, fertiliser-efficient varieties of crops, or chemicals that upregulate those genes.

We cannot yet know which of these approaches, if any, will be widely adopted, but we can learn one clear lesson from the guano islands. Chemistry can – and must – be part of the solution to our sustainability challenges.