The toxic tale of the Flint water crisis

When the city of Flint, US, changed the source of its water from nearby Detroit to the Flint river in April 2014, it wasn’t long before residents noticed the difference. The water coming through their taps looked murky, smelled nasty and tasted bad. Something was obviously very wrong. 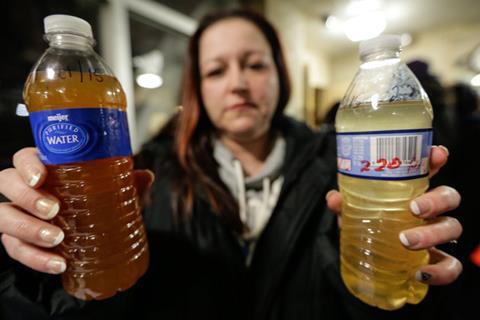 The switch in water source had freed lead from the city’s aging pipes, exposing many of its 100,000 citizens to hazardous levels of the potent neurotoxin. Yet it took almost 18 months for the scandalous details of Flint’s water crisis to fully emerge. Finally, in January 2016, Michigan’s governor Rick Snyder declared a state of emergency in the city.

The events in Flint followed shocking failures in management at local and state level, and in the US Environmental Protection Agency (EPA). The crisis has exposed serious flaws in water-quality regulation across the US, which researchers and legislators must urgently address. But Flint also demonstrates how chemical science can be used both to obfuscate and enlighten.

Trouble in the water

The change in water supply, which had been made in an effort to save the city money, led to a litany of chemical calamities. The dirty river water needed to be cleaned with relatively large amounts of chlorine, which raised the levels of carcinogenic chloromethanes in the water. So authorities added ferric chloride to remove the contaminants. Unfortunately, this raised already high levels of chloride in the water, which broke down the protective scale inside the city’s lead service lines, allowing the metal into drinking water. Authorities often add corrosion inhibiters to water to prevent this process, typically using salts of orthophosphates (PO43–, HPO42–, and H2PO4–). That, however, did not happen in Flint.

By early 2015, the children of Flint resident LeeAnne Walters had started to lose their hair and develop unusual rashes. The city found lead levels of around 400µg/l in her tap water, way above the statutory limit of 15µg/l, but blamed it on Walters’ domestic plumbing (which was in fact plastic). She then contacted Miguel Del Toral of the EPA’s Midwest water division, and Marc Edwards, an environmental engineer at Virginia Tech, who had investigated previous lead contamination incidents. Edwards’ tests showed that Walters’ water contained an astonishing 13,200µg/l of lead. Del Toral reported these and other findings in an internal EPA memo in June 2015 that was later leaked to the press. Still, authorities claimed Flint’s water was safe.

In September 2015, pediatrician Mona Hanna-Attisha of Michigan State University analysed the results of infant blood tests, and found that the proportion of children with elevated lead levels in Flint had doubled from 2% to 4.1% since the change in water supply. After a week of denials, the state admitted that her analysis was correct.

On 16 October 2015, Flint returned to its previous water source. By then, though, the damage had been done. The contaminated water has been drunk by thousands of young children, who are particularly vulnerable to the developmental and behavioural disorders that lead can cause. It is unclear how long it will take for lead concentrations to fall to safe levels, or how widespread the long-term health impacts will be.

One of the saddest aspects of this story is that there were so many missed opportunities to head off the growing crisis. The proposed change in water supply should have had a thorough risk assessment in advance, including an independent scientific opinion. The EPA, rather than negotiating with state authorities behind the scenes, should have taken control of Flint’s water supply as soon as Del Toral’s report detailed the disaster.

The local authorities seemed more concerned with meeting regulatory targets than protecting public health; officials told residents to flush their pipes before gathering water samples, for example, which tends to lower concentration readings. The EPA’s Lead and Copper Rule states that only 90% of samples from a city must fall below the 15µg/l limit; the remaining 10% can be much higher without triggering remedial action. Flint’s official surveys had met this threshold, partly because authorities included a number of samples from homes known to have plastic service lines, and also dropped a couple of high-lead results from their analysis.

A neat table full of data can feel reassuring. But if the data are deeply flawed, either through negligence or deliberate manipulation, it can pose an enormous threat to public health and ultimately undermine public trust in science. The EPA has been considering revising the Lead and Copper Rule for at least five years, and it clearly needs to move more quickly to close the glaring loopholes. Replacing lead pipes must be the ultimate goal – but that will take time, as careless removal could actually release more lead into the water system.

Those dealing with widespread public health fears could also learn a lot from Edwards and his colleagues. The team distributed hundreds of water sampling kits to Flint residents in August 2015, made a video explaining how to take accurate samples, and sent out volunteers to oversee collection. Results from 277 samples showed that one in six homes exceeded the 15µg/l threshold.

Instead of being patronised or ignored, the people of Flint had become equal partners in a study that gave them the tools to investigate a problem that was ruining their lives. It was a truly remarkable example of citizen science at its best.

Thanks to Sid Roy of the Flint Water Study, Yanna Lambrinidou at Virginia Tech and Sue Pennison of Drinking Water Inspectorate for helpful discussions.