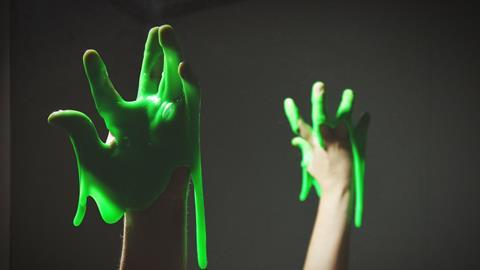 Time to rewrite the textbooks

How science corrects is an important lesson in the classroom

‘Scientists are looking to rewrite the textbook’, ‘these results are going to require rewriting the textbooks’, ‘this is textbook-changing stuff’. These paeans to scientific revolution all appeared in press releases over the past few months. With the revisions arriving at such a pace, it’s a wonder that textbooks aren’t recalled the moment they are printed.

‘Rewriting the textbooks’ is one of those clichés that is liberally misapplied in science writing. But it might be appropriate for two recent examples. The first is about slime, the mixture of borax and poly(vinyl alcohol) beloved of science festivals and feared by parents with deep-pile carpets. The second example – rather more highbrow – concerns the mechanism of nucleophilic aromatic substitution reactions. That’s unlikely to fire up the science fair enthusiasts, I admit, but it’s certainly useful in pharmaceutical synthesis.

‘Rewriting the textbooks’ is one of those clichés that is liberally misapplied in science writing. But it might be appropriate for two recent examples. The first is about slime, the mixture of borax and poly(vinyl alcohol) beloved of science festivals and feared by parents with deep-pile carpets. The second example – rather more highbrow – concerns the mechanism of nucleophilic aromatic substitution reactions (Chemistry World, August 2018, pXX). That’s unlikely to fire up the science fair enthusiasts, I admit, but it’s certainly useful in pharmaceutical synthesis.

In both cases, the widely accepted explanations of the chemistry involved have turned out to be wrong – perhaps not radically so, but nevertheless demonstrably incorrect. Although there’s no urgent need to pulp thousands of books, it does seem entirely reasonable to update our guides at the next opportunity.

But should the revision go further than simply replacing an old fact with a new one? Cases like these provide an opportunity to show how the transition happened – and understanding that process should itself be a core part of science education.

There are many different recipes for slime, but one of the classics includes PVA glue, containing poly(vinyl acetate) poly(vinyl alcohol), and a solution made from borax, found in some washing powders.

In July, Chemical & Engineering News ran a story about the booming popularity of slime demonstrations, accompanied by a graphic showing how the chemistry worked. Some readers then pointed out mistakes in the structure of borax and the bonding that holds slime together. Yet this was no slip of the ChemDraw pen – C&EN was simply reproducing structures that are widely depicted in teaching resources. So, rather than just make a correction, the magazine investigated further.

Borax is often called sodium tetraborate decahydrate (Na2B4O7·10H2O), its tetraborate anion drawn so that each boron atom bonds to three oxygens. But the actual formula is apparently Na2[B4O5(OH)4]·8H2O, which gives the boron atoms two different coordination environments – one trigonal, the other tetrahedral.

When borax mixes with poly(vinyl alcohol), it forms cross-links between the polymer strands to produce a slimy material. These cross-links are typically shown as tetrahydroxyborate ions that form hydrogen bonds with the polymer’s alcohol groups. Except that’s not what happens. Instead, the slime is held together by borate esters, according to 11B NMR analysis.

On to the second example. Nucleophilic aromatic substitution is usually described as a two-step process in undergraduate textbooks. First, a nucleophile attacks a benzene ring with a leaving group, forming a negatively-charged Meisenheimer complex; then, in the second step, the leaving group departs. Crucially, the complex exists as a discrete entity, with both nucleophile and leaving group fully bound to a carbon atom.

Eric Jacobsen at Harvard University, US, wondered if this stepwise mechanism was generally true. His team studied three different benzene compounds with groups that would stabilise or destabilise the intermediate complex. Using some fancy NMR experiments that tracked kinetic isotope effects, they discovered that only one compound (dinitrofluorobenzene) formed the complex, due to its electron-withdrawing nitro groups and poor leaving group.

Most examples of the reaction do not feature such extremes, though, and a computational study of 120 more cases showed that fewer than 20% would form the complex. The rest involved a concerted mechanism via an ephemeral transition state, with the leaving group departing as the nucleophile arrives.

Perhaps obsessing over the difference between a Meisenheimer complex and a Meisenheimer transition state merely looks like hair-splitting. Maybe we shouldn’t care how slime works, as long as it helps to enthuse young minds. And how far should we retrace the origins of each fact – do kids really need to learn about phlogiston the moment they encounter oxygen?

Unpacking these nuances may risk obscuring the nuts and bolts of the chemistry being taught. But some story-telling about how science actually evolves, alongside the bald facts, could offer wider benefits.

One of the reasons that ‘rewriting the textbooks’ has become such a popular trope is that it feels a bit transgressive, like violating some holy canon. This feeling arises because most people still think of science as a collection of immutable facts, rather than a mechanism for discovery. That misunderstanding can sometimes make science seem inherently fickle and even untrustworthy: a view that increasingly crops up in arguments about climate change, vaccines and other contentious topics.

Yet altering one’s worldview in the face of new evidence is a strength rather than a weakness. If we can tell stories about science that illustrate why being prepared to rewrite the textbooks is a good thing, it may help to foster a wider understanding of the process of science.

I like the two cases outlined above because they illustrate how science works – through missteps, corrections, clever experiments and communication. Stories like that give students an opportunity to learn more about the journey, and not just the destination, of research. That’s something worth rewriting the textbooks for.