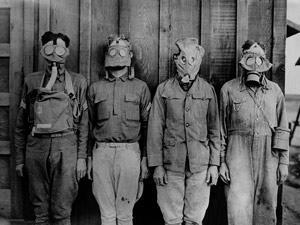 Sometimes, the history of chemistry takes some unusual twists and turns. This week, Michael Freemantle explains how failed experiments with a potential chemical weapon actually led to great unexpected advances…

Modern chemical warfare using lethal gases began on the 22nd of April 1915 when the Germans fired clouds of chlorine gas against the allies at Langemark, near Ypres in Belgium. But even before then, the French and Germans had been using non-lethal tear gases to fill hand grenades and shells. In August 1914, right at the start of the first world war, the French employed ethyl bromoacetate as a tear gas in grenades. Then, in January 1915, the Germans fired tear gas shells on the Eastern Front. They filled the shells with a mixture of benzyl bromide and xylyl bromide. 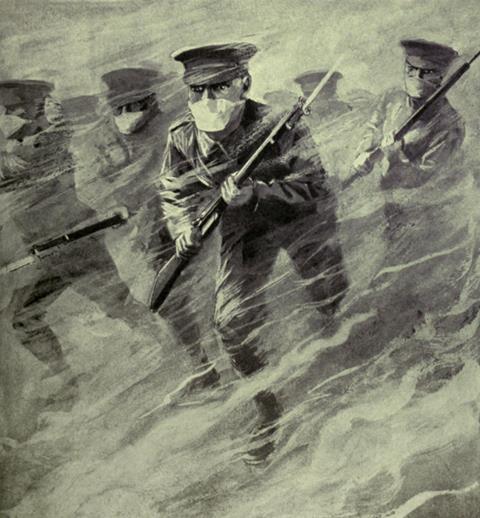 The possibility of throwing or firing projectiles filled with harmful gases had been proposed well before the first world war. Scottish chemist William Ramsay, for example, suggested to the British War Office that acrolein might be employed as a war gas against an enemy.

At the time, Ramsay had been carrying out experiments on acrolein, an unsaturated organic compound also known as propenal or acrylic aldehyde. The compound is a colourless or pale yellow liquid. Exposure to just a few parts per million of its penetrating acrid vapour for a minute or so causes extreme irritation to the eyes, skin and nasal passages. Acrolein was therefore an obvious candidate for use as a lachrymator, as tear gas is sometimes known. The War Office rejected Ramsay’s proposal and later adopted ethyl iodoacetate as its lachrymator for filling shells and grenades.

In November 1914, the French switched from ethyl bromoacetate to chloroacetone as their favoured tear gas for grenades. Then, in August 1915, they began to use iodoacetone as a tear gas for their artillery shells

There was a problem, however. All these tear gases were organic compounds containing a halogen. Halogens, and especially bromine and iodine, were costly to produce. Furthermore, acetone, which was used to make some of the gases, was in short supply.

The French, who were no doubt aware of Ramsay’s suggestion to the War Office, turned their attention to acrolein as a possible lachrymator. The chemical could be manufactured quite simply by dehydrating glycerine, a by-product of soap manufacture. It was therefore relatively cheap to produce. So, in January 1916, the French began filling their tear gas grenades and artillery shells with the liquid. They then hit another problem: the liquid rapidly deteriorated forming a gum. 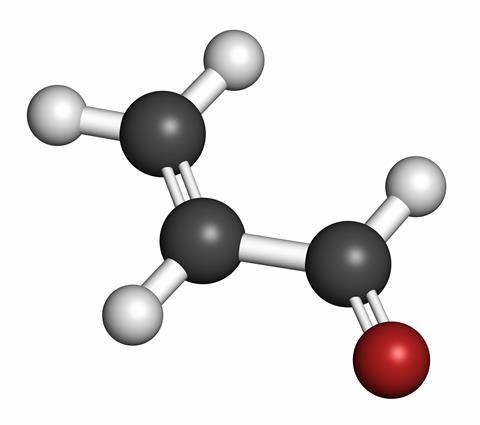 French organic chemists Charles Moureu and Charles Dufraisse, both of whom were working on the French chemical warfare programme at the time, set about investigating the problem. They observed that acrolein spontaneously turned into a harmless waxy resin when it was exposed to air. Further experiments revealed that atmospheric oxygen and a process known as autoxidation caused the deterioration. In this process, acrolein and oxygen combined to form peroxides that catalysed the rate of oxidation and therefore the rate of deterioration of the acrolein. The two French chemists called the compounds ‘pro-oxygenic’ because they promoted oxidation.

They then went on to show that the autoxidation of acrolein could be slowed down using phenolic compounds. These compounds consist of molecules with benzene rings bonded to one or more hydroxyl groups. They called the compounds ‘anti-oxygenic.’ Today, we are all familiar with ‘anti-oxygenic’ compounds. They are now known as antioxidants.

Antioxidants are found widely in nature. For example, vitamin C, ascorbic acid, is an antioxidant that is present in oranges, lemons, cabbages, lettuces, potatoes and other fruits and vegetables. It keeps our skin healthy and helps cuts and abrasions to heal properly. Antioxidants are also used as food additives to slow food deterioration, as stabilisers for lubricants and fuels, and as rubber additives to retard ageing.

The French investigation into the failure of acrolein as a chemical warfare agent therefore had beneficial outcomes, not just for science and technology, but indeed for all of us. The discovery by Moureu and Dufraisse soon led to the realisation that small amounts of antioxidant compounds could protect foods, rubber, fuels and many other products from oxidation and therefore prevent or at least slow down their deterioration. Their discovery stopped the rot, so to speak.

Ramsay, who had originally considered using acrolein as a war gas, received numerous honours before the first world war, not for his work on acrolein, but rather for his discovery of noble gases. In one year alone, 1898, he discovered neon, krypton, and xenon. A few years earlier, he had discovered argon and also isolated helium. Ramsay received a knighthood in 1902. Two years later, he was awarded the Nobel prize in chemistry for his discovery of the inert gases and their place in the periodic table. He died from nasal cancer in July 1916 at the age of 63.

That was Michael Freemantle, explaining how acrolein may not have made a great tear gas, but did lead to an understanding of antioxidants. Next week, another compound with unintended consequences…

Flibanserin, a drug to treat female hypoactive sexual desire disorder or low sex drive in women, started life as a failed antidepressant in the 1990s. While it didn’t do much for mood, it did seem to increase female sexual desire and the frequency of satisfying sexual encounters.

Martha Henriques examines flibanserin, and explains why it’s not just Viagra for women, in next week’s Chemistry in its Element. Let us know what you think of our podcasts by emailing chemistryworld@rsc.org on on twitter, where we’re @chemistryworld. I’m Ben Valsler, thanks for joining me.