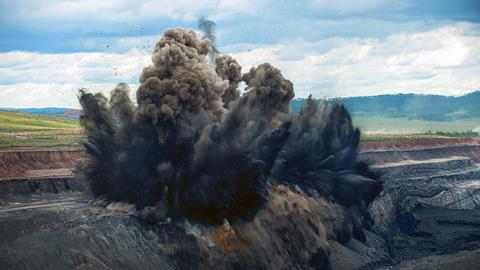 A compound so explosively unstable that nobody has been able to measure how sensitive it is without it, well, exploding 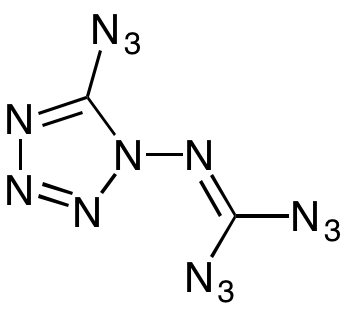 In 2011, a group of researchers at the University of Munich in Germany announced that they were the first people to synthesise an unlikely molecule. The compound, which we’re going to call azidoazide azide – more on that later – is made up of two carbon atoms, no hydrogen, and a staggering fourteen nitrogen atoms, making it 89.1% nitrogen by weight and one of the most nitrogen-rich organic compounds ever made.

From that description alone, most chemists are going to start wincing. Looking at the chemical structure of azidoazide azide and examining the extreme inequality in charge distribution between the functional groups, it’s little wonder that it has subsequently become known as the most explosive chemical compound ever created. But, as you might expect, the story isn’t quite so simple.

The ‘open form’ of azidoazide azide

To start with, the team from the University of Munich weren’t the first to ever synthesise azidoazide azide, although they were the first to correctly identify the structure. In truth, they were beaten to the punch by a solid five decades; a patent filed in 1961 records a technique for synthesising the ‘open form’ of C2N14, which claimed to have a fourth azide group in place of the tetrazole ring seen in the structure identified in 2011. However, further research in 2013 revealed that at room temperature, the fourth azide rapidly cyclises to form the tetrazole, meaning that the open form the patent describes doesn’t actually exist under the conditions they were using.

With such confusion over the structure, it’s perhaps unsurprising that finding a name for this compound has proven to be a challenge. Its technical name is the incredibly catchy 1-diazidocarbamoyl-5-azidotetrazole, but while that name might be accurate, most researchers would prefer something shorter. One alternative is isocyanogen tetraazide, which is much easier to say; however, as the name originated from the structure published in 1961, it references a fourth azide group that isn’t present at room temperature. Outside of the literature, where the accuracy of naming conventions is less important, many people, including myself, have chosen to adopt the pleasingly poetic, if inaccurate, name suggested by Derek Lowe: Azidoazide azide.

Most people prefer to limit themselves to destroying a single spectrometer per day, but then, these are the sorts of risks you take on when working with a compound that is nearly 90% nitrogen

So, is this really the most explosive compound ever synthesised? It’s possible. The truth is that we can’t be entirely sure because no one has been able to accurately measure just how sensitive it is without it blowing up in their face. The 2011 paper attempted to perform shock and friction tests but found even their smallest possible loadings – 0.25 joules in impact and 1 Newton in friction – were enough to trigger explosive decomposition. In at least one instance, merely touching the compound with a spatula led to an explosion. Concluding that the material was too sensitive to safely handle, the team simply reported that its decomposition thresholds were well below their readings and left it there.

Unfortunately, abandoning stress testing didn’t see an end to unintended detonations. While characterising the molecule’s structure, they subjected a small number of crystals to a 150 mW laser inside a Raman spectrometer, only to be surprised when the laser’s energy proved sufficient to trigger yet another explosion. Perhaps the most concerning detail about all of this is that one of the papers states ‘Compound 2 detonated several times during the Raman measurement’ – most people prefer to limit themselves to destroying a single spectrometer per day, but then, these are the sorts of risks you take on when working with a compound that is nearly 90% nitrogen. 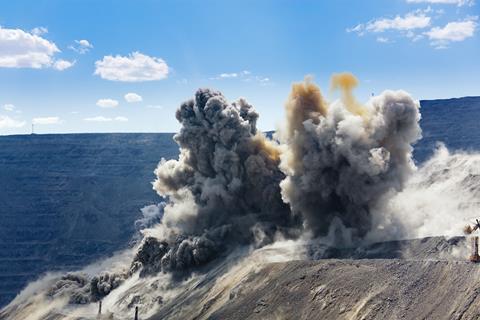 With all of that said, is there any real use for a compound as critically unstable as azidoazide azide? The 1961 patent suggests the compound might be suitable as a primary detonator, a substance used in small quantities to trigger an explosion in more stable secondary explosives that can be handled in bulk, and later investigations have supported that suggestion. The team from Munich calculated that the compound has a detonation velocity around 700 m/s faster than that of 2,4,6-triazidotriazine, a compound currently being investigated as a possible green alternative to the lead azide used in industry.

That was Frances Addison with aziodazide azide. Next week is our last Chemistry in its element podcast of 2020, and I’ll be taking a look at one of the distinctive flavours of Christmas, cinnamaldehyde – if the name hasn’t given it away, it’s the compound that gives cinnamon its flavour and odour. It’s also used as an insecticide, antimicrobial and anti-corrosion agent and, in a very 2020 twist, is even being investigated as a potential preventative for Covid-19.

Until then, get in touch in the usual ways: email chemistryworld@rsc.org or tweet @chemistryworld. I’m Ben Valsler, thanks for joining me.