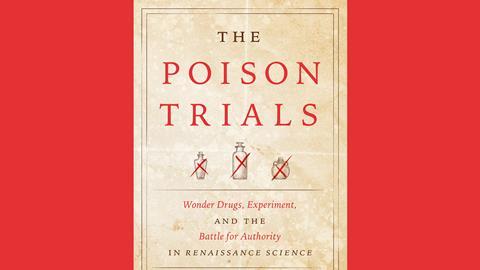 This month we find out drug testing has come a long way, as we read The Poison Trials: Wonder Drugs, Experiment and the Battle for Authority in Renaissance Science, the latest book from historian of science and medicine Alisha Rankin. The book tells little-known stories of medicine in 16th century Europe, such as Pope Clement VII’s personal physician testing a new antidote by feeding poison-laced cake to two condemned criminals. Only one received the cure.

Such grisly episodes occurred at a time when fears of deadly poisons were running high among those in power and physicians were scrabbling for cures. As such, Rankin suggests they might be considered an early form of clinical trials.

We talk to Rankin about researching and writing the book, and discuss what these stories mean for us today, as scientists search for cures to a public health emergency.

You can also read Vijay’s review of The Poison Trials here.

For our next month’s episode, we’ll read a book with a particularly delightful title: Never Mind the B#ll*cks, Here’s the Science. In it, biochemist and immunologist Luke O’Neill looks at the biggest challenges facing our species, grappling with questions such as ‘Do we have control over our lives?’ or ‘Will we destroy the planet?’ The book promises to make complex science accessible with wit and clever pop culture references.

If you, dear listener, have any thoughts on The Poison Trials or know of a book you would like us to discuss in an upcoming book club, let us know in the comments below or tweet at us @ChemistryWorld.