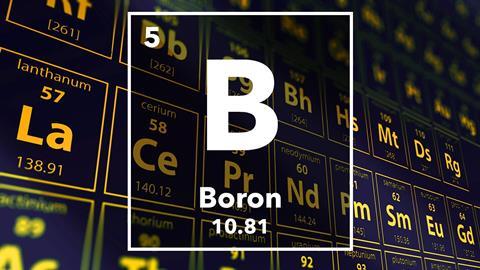 This week we see the true nature of an element wrongly accused of being boring. I'm Meera Senthilingam from the Naked Scientists, and to see how a supposed dreary element can indulge in swinging antics and numerous adventures here's Pat Bailey with the brighter side of boron.

If I had to choose a person to represent gold, then I guess it might be an ambitious young stockbroker, a bit flashy, and not great at forming relationships. For helium – an airy-fairy blonde with a bit of a squeaky voice, but with aspirations to join the nobility. 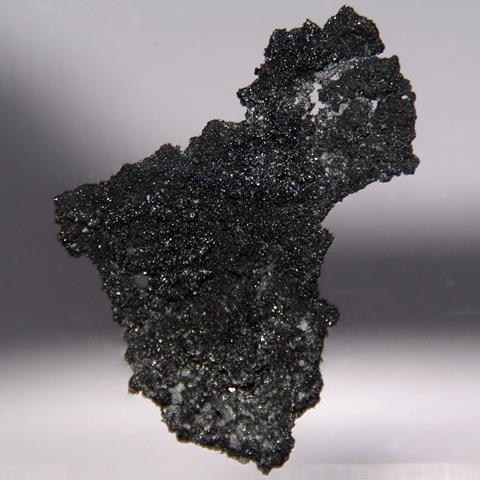 And for boron? Well at first glance, during the working week at any rate, a boring, middle-aged accountant, maybe wearing brown corduroys and a tweed jacket. But with an unexpected side-to him in his spare time – skydiving, motorbiking, and a member of a highly dubious society that indulges in swapping partners. 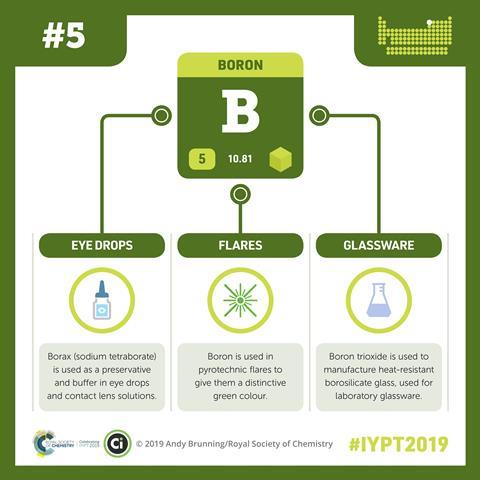 Let's start with the boring bit. Boron is usually isolated as a brown, amorphous solid. I don't know anyone who thinks the element boron has anything interesting about it.   But its unexpected side starts to emerge when you look at some simple compounds of boron. Consider the nitride, for example – just the two elements at numbers five and seven in the periodic table, but able to join forces to provide hard diamond or soft graphite–like structures, very similar to those of the sixth element, carbon. 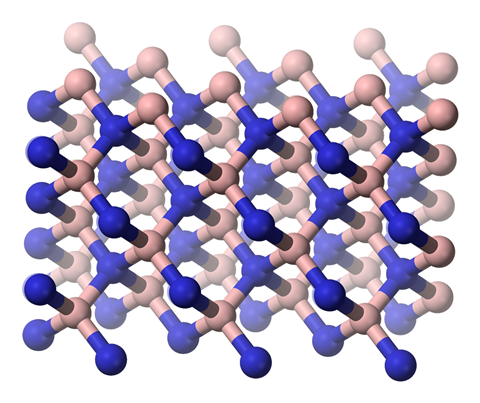 The cubic form of boron nitride, analogous to diamond

Then there is the trifluoride – remember that acids were first classified as substances that could provide protons, but BF3 is the archetypal Lewis acid, which doesn't have a proton in sight, yet is able to coordinate with lone pairs, allowing it to catalyse an array of reactions. It can achieve this chemistry because boron really does have two sides to it – it is set up to form three bonds with adjacent atoms, but even in this state, readily forms an extra bond in order to complete the second main shell of eight electrons. But when it does this, it acquires a negative charge, and it can only regain neutrality by losing one of its bonds – it really does have a split personality. 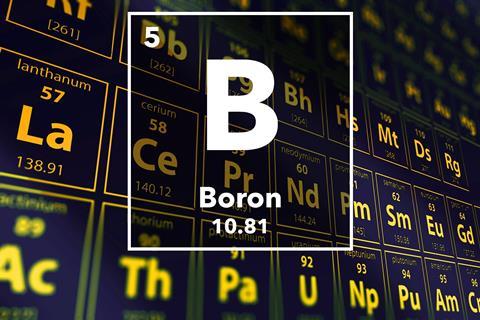 But the real interest – the 'skydiving' – starts when we look at the trihydride of boron. We'll return to this later on, as BH3 has structural subtleties that will really take us into sexy territory. But at this stage we'll simply see how boron's schizophrenic side can be used to good effect: add BH3 to an alkene, then throw in some alkaline hydrogen peroxide, and the oxygen first attaches to the boron, and then gets shuttled onto the adjacent carbon, all driven by this balance between 3- and 4-valent boron. This rather complicated reaction (mechanistically) is very reliable, and has been used for decades now as a simple way of turning alkenes into alcohols. Building on this idea, lots of clever variants allow one to introduce the alcohol very selectively, including my favourite of the reagent made by reacting borane with cycloocta-1,5-diene; the resulting dialkylborane is incredibly selective at attacking only the least substituted carbon of an alkene, and its often abbreviated schematically to a BH unit hanging down from two arcs, leading to its nickname as the parachute molecule. 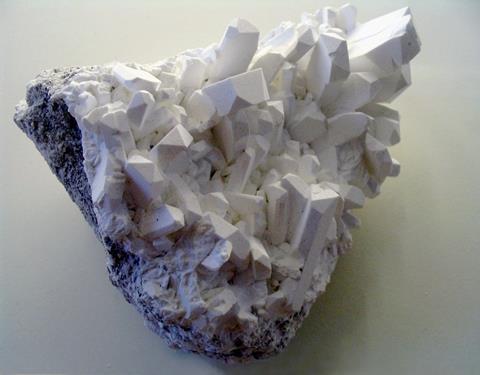 So much for skydiving – what about motorbikes? Well this bit is rather like seeing what appears to be a 50cc moped, only to find that it goes from 0-to-60 in 3.5 seconds.   Let me explain – the name boron comes from the mineral borax, which is a salt of the a really uninspiring acid called boracic acid. You can buy it from any pharmacist, and it's a mildly acidic antiseptic, and it essentially comprises a boron atom attached to three OH groups. And here's the surprise – you can fairly easily swap one OH for an aryl group, and you generate an aryl boronic acid capable of coupling to a whole range of aryl halides using palladium catalysis. This was a long sought-after process that many had thought impossible in high yield, until a chemist called Suzuki (hence the motorbike connection) found that boron could solve the trick.

And lastly to the sexy bit. I said that boron trihydride had a structural subtlety, and that is the fact that it was an 'impossible' molecule back in 1945, in that there was no known bonding that could account for its dimeric structure, or that of some related boron hydrides. And then in one of those 'Just William' sort of stories when a youngster gets the better of his elders, Christopher Longuet-Higgins, then an undergraduate at Cambridge, came up with the solution during a tutorial, publishing the landmark paper with his tutor whilst still only 20. Their explanation also predicted several new boron hydrides, which were duly discovered, as well as the fascinating field of boron cluster chemistry, in which the tri/tetra-valent schizophrenia of boron allows partner swaps and multiple bonding. But I won't elaborate further – you'll have to find out for yourself. But remember, don't just judge elements by their first appearance – they may have hidden secrets and unexpected talents.

So, split personalities, parachute molecules, and swapping partners – I certainly won't be judging this element on its first appearance. That was Keele University's Pat Bailey revealing the truth about boron. Now, next time we meet an element that also believes in humility.

When it comes to use lanthanum best resembles a successful movie bit part player. Someone who never gets the lead role, but appears in film after film, solidly portraying different characters. Not a particularly expensive material to produce, lanthanum's many roles remain of a supporting kind, playing an essential part but avoiding the limelight.

Join Brian Clegg to find out how the humble lanthanum spreads itself around town in next week's Chemistry in its Element. Until then, thank you for listening, I'm Meera Senthilingam from the Naked Scientists.