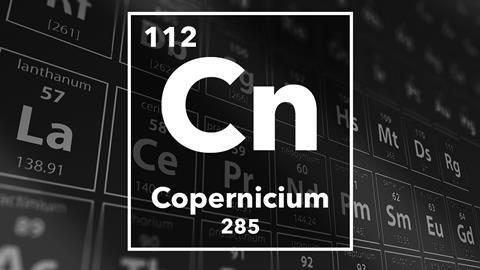 Sigurd Hofmann shares the story of the search for element 112: copernicium

This week an element so new that it's yet to be given an official name and it's discovery all began with a question. Here's Sigurd Hofmann.

Our question is simple, but difficult to answer. What we want to know is how many elements are there or where is the end of the periodic table?

The elements beyond uranium (those with an atomic number greater than 92) are not found in nature because they have short half-lives, meaning they exist for only very short periods of time before they decay. So, if we want to know how many of these elements, called the transuranium elements exist we have to try and make them in the laboratory.

My team at the Institute for Heavy Ion Research in Darmstadt, Germany are one of many groups worldwide involved in 'searching' for more man-made elements and in 1996 we set about producing element 112, inside a particle accelerator. We bombarded a lead target – that has 82 protons – with a zinc beam containing 30 protons for one week, and were able to detect a single atom of an element with 112 protons – element 112. 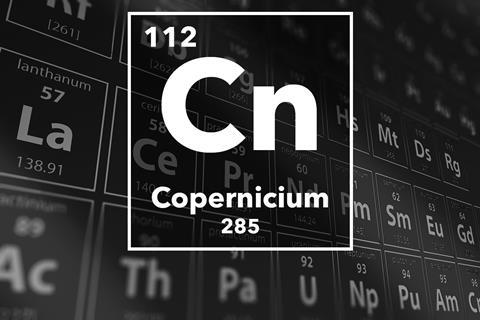 Periodic table of the elements – 112 – Copernicium

As is standard for these types of experiments, we used isotopes of zinc and lead with high numbers of neutrons. Our zinc nuclei had 40 neutrons and our lead nuclei had 126 neutrons, so that the nucleus of our new element had 112 protons and 166 neutrons, meaning that it had 278 nucleons or, as it is more commonly described, an atomic mass of 278.

But like many chemical reactions this nuclear fusion reaction is exothermic and the newly created nucleus is hot. So, it cools down by emission of one neutron and the nucleus which we were able to study had the atomic mass number 277. We were only able to make a single atom of this element at this time, because the immensely strong electric forces acting the zinc and lead mean they are much more likely to fly apart than fuse together.

In a second experiment in 2000 we were able to measure a second atom of element 112, and then in 2004 scientists working at RIKEN in Japan produced another two atoms of this element. After confirmation by the Japanese group, IUPAC – the association who ratify newly found elements – officially recognised my team as the discoverers of this element and in April 2009 we were asked to suggest a name for it, as it currently goes by the IUPAC systematic name Ununbium. We selected a name through email correspondence between the 21 researchers from four nations involved in the experiments. Also seriously considered were suggestions from students and scientists, posted on the Chemistry World blog site, within four weeks, we selected the astronomer Nicolaus Copernicus to give his name to element 112. 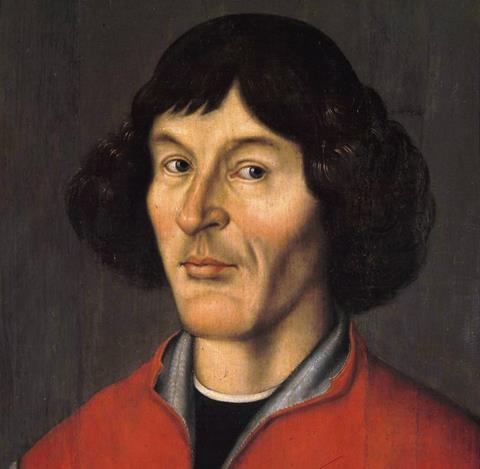 Nicolaus Copernicus lived in the period of the transition from the middle ages to modern times. His work had exceptional influence on the political and philosophical thinking of people and on the rise of modern science based on the results of experiments. Nicolaus Copernicus developed a conclusive model for the complex astronomical observations of the movements of Sun, Moon, planets and stars on Heaven's Sphere. The first two of the laboratory created transuranium elements, neptunium and plutonium, received their names like uranium from the planets. So, to honour the father of the planetary system we suggested that element 112 was named after Copernicus. The name we suggested to IUPAC in July this year is 'copernicium', with the abbreviation Cn. Apparently IUPAC are also currently discussing modifying the name to 'copernicum', as it is easier to say in many languages.

Chemically copernicium is located in group 12 of the periodic table – below zinc, cadmium and mercury and the first experiments using the adsorption of a few atoms of the element on a cold gold surface showed that copernicium behaves chemically like mercury, although it is possibly a little bit more volatile. We also believe that it will be liquid at room temperature. So far element copernicium has not found any practical uses, because of the problems associated with making it and the fact it decays within milliseconds or seconds. However, its detection has paved the way to finding heavier elements still, the so called super heavy elements. For these elements theory predicts longer lifetimes and higher stability.

So watch this space to find out if element 112 is indeed named copernicium and if any more super heavy elements will be added to the periodic table. That was Sigurd Hofmann from the GSI Helmolt Centre for Heavy Ion Research in Germany. Now staying on the theme of elemental discoveries, next week we hear about palladium whose discoverer William Hyde-Wollaston announced his finding in a very unusual manner.

When he isolated this metal in 1802, he did something quite unique. Instead of announcing it in a reputable scientific journal, he described its properties in an anonymous leaflet, displayed in the window of a shop in Gerrard Street, Soho in April 1803. Entitled Palladium; or New silver, this handbill described properties of the new element. No one was able to refute Wollaston's claim for a new element, but it was not until 1805 that he published his discovery in a scientific journal.

Simon Cotton will be explaining more about the discovery, chemistry and properties of palladium in next week's Chemistry in its Element. Until then I'm Meera Senthilingam and thank you for listening.