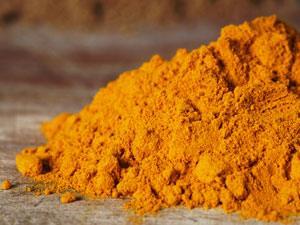 For an aromatic curry and, potentially, a healthier life, Simon Cotton recommends curcumin

This week, prepare your taste buds as Simon Cotton’s preparing some curry…

Anyone who recalls British cuisine of the 1950s will remember how bland it was. Not just school meals, with badly overcooked vegetables, but the height of eating out meant a trip to the fish-and-chip shop. It was in the 1960s than Indian and Chinese restaurants began to spread, first in the larger cities and then more widely, to be followed by the familiar take-aways. For those who wanted to create their own curry, the ingredients could be had at ethnic shops, soon to be followed by supermarkets. 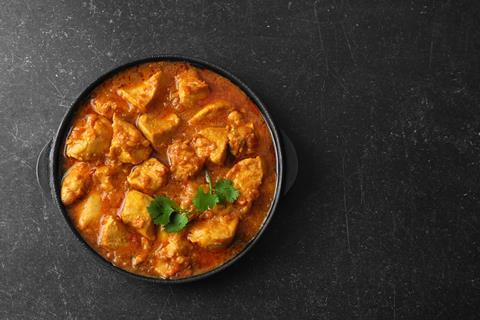 As a student in the late 60s, I made regular Saturday visits to a shop in the Old Brompton Road to buy spices and mustard oil, as well as to a nearby butcher’s, before spending hours poring over Harvey Day’s Complete Book of Curries - not to mention a cooker - to create a vindaloo for Sunday lunch for up to 20 people. I’d cut the meat into small chunks, then marinate it in a mixture of spices in vinegar overnight. I didn’t use curry powder, but bought the individual spices. It is funny how many spices’ names begin with ‘c’ – there were cloves, coriander, cumin, cinnamon, chilli peppers and cardamoms, as well as turmeric, ginger and garlic. Next day I’d heat up the mustard oil for a couple of hours’ cooking of the marinated meat; while that was simmering, there was time to cook the rice and fry some pappadoms.

Normally when you think of spices in a curry you think of the capsaicin, the molecule in chilli peppers that is responsible for the distinctive ‘hotness’ of a curry. In fact, the length of time the spices were marinating meant that this was the mildest vindaloo you’ve ever heard of. But other spices used in curries are important, and not just for the nice aromas that they create; they are increasingly being studied for their possible medicinal properties. Several have antibacterial properties, like cinnamon and coriander, which are likely to be due to the aldehydes they contain.

But the spice that has attracted most interest is turmeric, on account of a molecule it contains called curcumin.

Turmeric is made from the roots of a plant in the ginger family, Curcuma longa. It gets its name from the Sanskrit word for yellow. It is native to India, where it has been used for 4000 years as a spice in cooking and also for its medicinal properties. Of course, it is also a colourant, and its colour is pH sensitive - it is yellow under acid conditions, but it turns much redder in alkali. So keep it off your apron when cooking, else you’ll get a nasty shock in the wash on Monday, when the alkaline detergent gets to it. 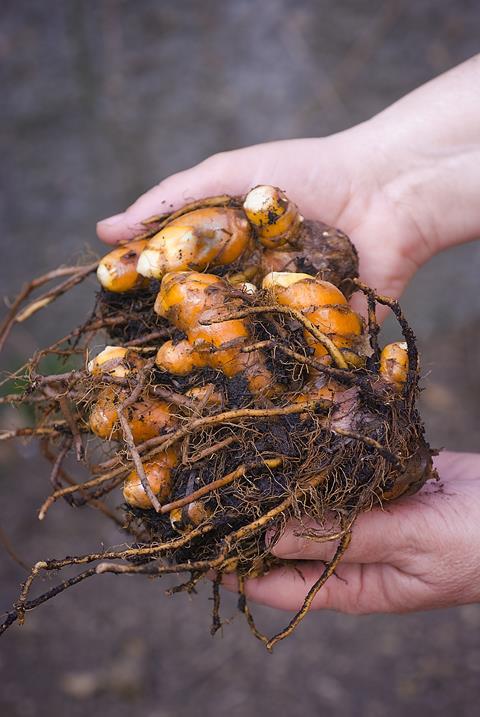 That distinctive colour is due to curcumin. This is a molecule that contains two benzene rings, linked by a chain of 7 carbons with a ketone and alcohol groups, together with several double bonds. Each benzene ring has a phenol group as well as an ether linkage.

In the past, turmeric had a role in Asian medicine for various reasons – it was a treatment for digestive problems and was also applied to wounds and to the skin as an anti-inflammatory.

But now scientists are suggesting a lot more things that turmeric, and curcumin in particular, can do. It is being studied in connection with various cancers, such as oesophageal cancer and bowel cancer. Some of these trials are in association with established drugs like taxol. In trials related to colonic cancer, curcumin has been shown to inhibit an enzyme that promotes tumours, and it looks as if curcumin may interfere with various signalling pathways implicated in cancers.

Curcumin is also being intensively examined as a possible anti-Alzheimer’s disease molecule. One of the characteristics of Alzheimer’s disease is the accumulation of ß-amyloid proteins in the brain. It has been shown that curcumin binds ß-amyloid species and prevents them from aggregating. Curcumin also reduces levels of oxidized proteins and interleukin 1-ß, a pro-inflammatory cytokine elevated in the brains of mice.

There are reports that curcumin and similar molecules in turmeric extracts prevent rheumatoid arthritis, though it could face stiff competition from other treatments.

At present these reports are straws in the wind, and we wait to see if any of them are applicable in clinical trials, but they do suggest that ancient civilisations knew what was good for them.

Recent research by Arunima Kashyap, of Portland State University, and Steven Weber, from Washington State University, Vancouver has found that cooks in the Indus river civilisation were using turmeric in their meals over 4000 years ago. Eat your heart out, Jamie.

So tasty meals go far back in history. That was Birmingham University’s Simon Cotton with the tasty, yet medicinal, chemistry of curcumin. Now next week, things get bloody.

It’s one of nature’s most important macromolecules. A synthetic version of it is used to save lives, yet it is traded in large amounts on the black market to be put to nefarious use in professional and amateur sport. Let’s find out more about the double life of erythropoietin.

And you can only find out by joining David Lindsay in next week’s Chemistry in its Element. Until then, thank you for listening, I’m Meera Senthilingam.