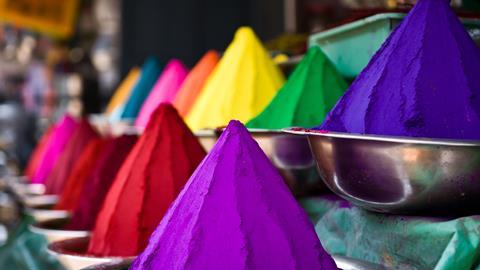 Purple was once a colour only royalty could afford to wear. Hayley Birch investigates tyrian purple, or dibromoindigo, the original purple dye

This week, Hayley Birch brings some colour to our lives.

Sherlock Holmes was partial to the colour purple. In one of his famous stories, Arthur Conan Doyle has him ‘lounging upon the sofa in a purple dressing-gown’. But according to those who have studied Doyle’s stories closely, there’s reason to suspect that Holmes’ interest in purple ran deeper than the colour of his loungewear. 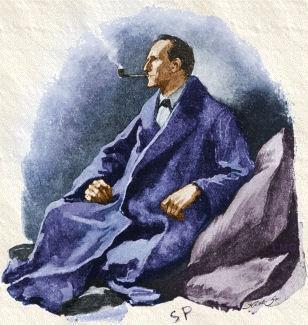 In 1893, Holmes disappeared on his ‘Great Hiatus’. Doyle had tried to kill him off in The final problem, but finally gave him his comeback in the 1903 short story, The adventure of the empty house. Holmes tells Watson he’s spent time travelling in Tibet and Persia, and, curiously, ‘in a research into the coal-tar derivatives’. A number of authors have suggested the detective was putting his chemical know-how to good use in the dye industry.

Why? Well, by this time, the synthetic dye industry in Britain was flagging. It had all started out so promising, with the young chemist William Henry Perkin of London discovering the first synthetic dye in 1856. But the early lead that Britain had established was soon diminished by the superior productivity of German chemical firms. Holmes, it’s said, was likely involved in a patriotic attempt to rescue British hopes.

The synthetic dye industry exploded in the 19th century with the realisation that expensive colours like purple and indigo could be produced in the lab. Until then, anyone who wanted a purple dressing gown would have had to pay through the nose for it. Purple dye was made by collecting hundreds – or potentially thousands – of molluscs and extracting from them a special mucus. This mucus was the source a green, bromine-containing compound called tyriverdin, which decomposed in light to produce dibromoindigo, or tyrian purple.

The same substance is known to have been used since ancient times to colour ceremonial robes. Besides nobles, few could afford to wear purple clothing. Due to the labour intensive production process, it has often been said that tyrian purple was more expensive than gold. Today’s archaeological journals refer to it as ‘royal purple’. It was written about in classic Greek texts and even by Aristotle, who mentioned that to extract it the glands of the molluscs had to be removed with extreme care from beneath the shell. A more complete account of the dye-making process appears in Roman times, in Pliny the Elder’s Historia Naturalis. The philosopher and Roman army commander wrote that ‘a sextarius’ – or seven pounds – of salt was added to each hundred pounds of extract. After soaking, boiling and dilution with water, a well-washed fleece could be steeped in the dye. (In passing, he mentioned that another dye could be diluted with human urine.)

Dibromoindigo’s chemical identity wasn’t revealed until 1909, when the German chemist Paul Friedländer isolated it from the glands of 12,000 spiny sea snails

The Romans, it seems, had the dye-making process down, but of course, they didn’t know anything of the chemical compound they were working with. Dibromoindigo’s chemical identity wasn’t revealed until 1909, when the German chemist Paul Friedländer isolated it from the glands of 12,000 spiny sea snails. He only got 1.4 grams of the stuff for his trouble, but that was enough to enable him to analyse the molecule and divine its empirical formula. He was surprised to learn that it contained bromine, an element that we now know the snails get from the sea and bind to the indigo molecule to make their purple. 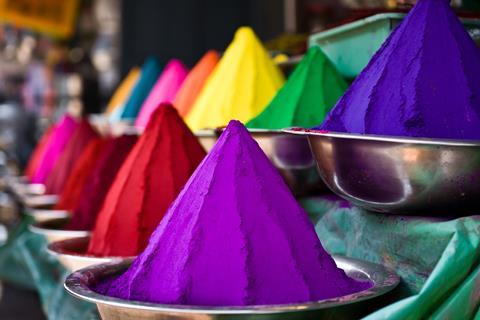 Still, the chemical formula was of little interest to the dye industry now. Perkin had already reinvented the colour purple. Perkin’s mauve, a mixture of four aromatic compounds known as mauvines A, B, B2 and C, was initially referred to as tyrian purple, after its mollusc-derived counterpart, but it was no such thing. 18-year-old Perkin, the son of a carpenter, stumbled upon it accidentally among the by-products of the coal gasification process, while trying to make quinine.

So, what does all this tell us about Sherlock Holmes’ mysterious disappearance in 1893? Was the purple dressing gown some sort of clue about his secret studies of coal-tar derivatives? Well, no. The garment actually appeared in the detective’s wardrobe in 1890 – three years before his disappearance. It’s not as if he returned from his travels carrying a freshly dyed robe. And remember that by this time Perkin’s cheaper, synthetic mauve had been around for some years. Perkin had already made his fortune and sold his dye business to pursue a career in chemical research. The Germans were conquering the synthetic dye industry. So Sherlock Holmes wearing a purple dressing gown in 1890 doesn’t tell us much at all, except that Holmes liked purple – and that his dressing gown probably never went near a snail, or a drop of dibromoindigo.

So Holmes was just like the rest of us. Science writer Hayley Birch there, with the regally colourful chemistry of dibromoindigo. Next week, the ultimate solvent.

DCM is a volatile, colourless liquid, with a mildly sweet, not unpleasant odour. It’s immiscible with water but can dissolve a wide range of organic compounds. These properties make it the perfect solvent for use in the lab.

Discover how by joining Emily James in next week’s Chemistry in its Element. Until then, thank you for listening, I’m Meera Senthilingam.