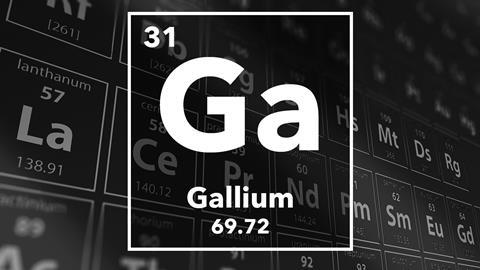 An element used in solar powered cars and in space probes

Hello and this week to the story of the element that's named after a rooster although the man here to tell us about it actually chickened out when it came to eating some of this chemical, although he did confess to giving it a quick lick. And to tell us how it tasted and why gallium could hold the key to the next generation of LEDs, here's Andrea Sella.

When I was a child growing up in New York, some of the sweets most sort after by my classmates and me, with yellow and brown packs of highly coloured sugar coated chocolate pills bearing the characters M & M. You could pop them into your mouth one by one and suck them gently until the smooth surface became crumbling to reveal the smooth milk chocolate beneath; alternatively you cold cram your mouth with as many as you could and crunch them greedily to cause an explosion of sound, texture and flavour in your head. A secret pleasure that was hard to beat. I was reminded of all this when a colleague of mine who was having a lab clear out, knocked on my door and asked me knowing full well what my answer would be, 'Hi Andrea, would you like a lump of gallium?', 'of course I would love some Gallium', I gurgled. The M & M of the elements; the one which reputedly melts in your mouth but not in your hand, he handed me a small plastic bag badly stained with black smudges. I undid the knot eagerly and there it was, a gleaming silvery lump bearing all the hallmarks of a metal that had been repeatedly melted and then refrozen. 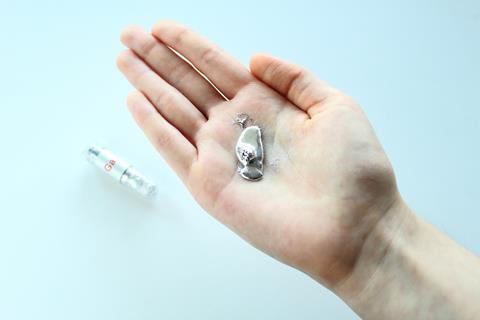 Gallium, you see, melts at 30°C, which means that on a hot day, you hold it in your pocket at your peril. Surprisingly however it's not very volatile. In fact gallium has the largest liquid range of any material known to man. Its boiling point is just over 2400°C. So unlike other liquid metals, there is no toxic vapour to worry about. Bizarrely as well, the metal contracts as it melts, rather like water. So solid Gallium floats on its liquid, a property shared only by a couple of other elements, bismuth and antimony. The reason for this weird melting behaviour has been a matter of argument and speculation for about 50 years. It's now fairly well established that gallium surrounds itself with more of its neighbours when in the liquid than in the solid, although the reasons for this still remains obscure.

Yet for all its strangeness the discovery of this odd element was no accident. Dmitri Mendeleev, the bearded Russian chemist who constructed the periodic table as we know it today, spotted a number of gaps and discrepancies in his arrangement. One of these was the absence of an element which he expected to fit below Aluminum. So confident was he in the correctness of his framework that he named the as yet undiscovered element ekaaluminium. Six years later in 1875, an ambitious French element hunter Francois Lecoq de Boisbaudran one of the earliest proponents of the new-fangled technique of spectroscopy spotted a line in the violet part of the visible spectrum at 417nm in a sample of zinc sulphide, he realized that this must come from a new element. Working in his home laboratory in spite of starting from some 52 kilos of an ore from the Pyrenees, it took three weeks for him to accumulate a couple of milligrams of the mysterious material. He then scaled up his extraction and took the product of his labours to Paris where he studied it further in Adolphe Wurtz's lab. 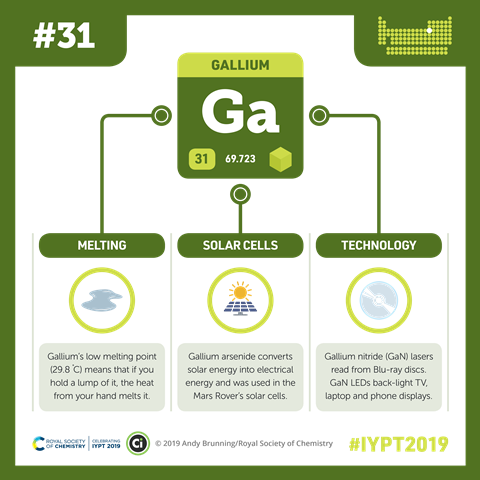 Just before Christmas in 1875, Lecoq presented his results to the French academy proudly displaying a sample of almost 600mg, less than a gram of material harvested from 450 kilos of ore. And the name Lecoq patriotically chose to base it on the Latin name for France, Gallia; Gaul in English. But it was immediately pointed out that there might be something more to the name than met the eye. The Latin word for a rooster is Gallus, Lecoq, rooster, gallium, get it. It seems he may have been a rather cunning linguist as well as a chemist. Either way, Lecoq could look back with some satisfaction at having helped to cement Mendeleev's table, was the foundation stone of chemistry. He then moved on to the intriguing mystery of the 'rare earths', ultimately isolating two more elements and conforming the existence of several more.

Gallium soon moved into the main stream of chemistry. Nowadays the metal itself finds few uses, but its compound with arsenic, gallium arsenide has for several years been touted as a possible replacement for silicon. Since not only is it a semiconductor but it is one with a direct band gap, in other words it can be made into a metalloid, a property which is particularly useful for infrared but also visible LEDs. Gallium arsenide solar cells are also much more efficient than those made of conventional silicon and are being used in solar powered cars and in space probes. 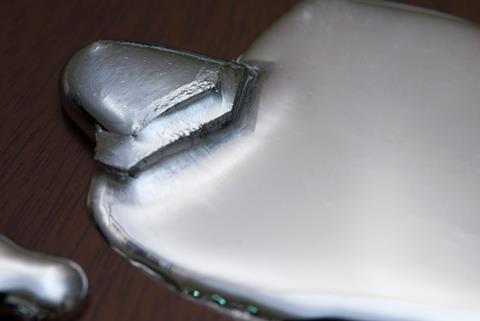 But I'm sure you really want to know is, if this really is the M & M element, what does it taste like? I knew you would ask. So I had a quick lick a couple of days back and the answer is it doesn't actually taste very much to be honest. There's a faintly astringent, metallic taste which lingers on your tongue for few hours. And when it is molten, sorry I'll leave that experiment for someone more intrepid than I.

UCL chemist Andrea Sella with the story of Gallium, the element that Lecoq allegedly named after himself. Next week we are meeting the metal that powers nuclear rectors but can also be lethal for another reason.

Because it is so dense DU is also used in shielding in the keels of boats and more controversially in the noses of armour piercing weapons. The metal has the desirable ability to self sharpen as it pierces a target rather than mushrooming upon impact, the way conventional tungsten carbide tipped weapons do.

DU being Depleted uranium of course and Edinburgh chemist Polly Arnold will be here to tell us its story as well as revealing why it actually makes very beautiful glass on next week's Chemistry in its element. I hope you can join us. I'm Chris Smith, thank you for listening and good bye.