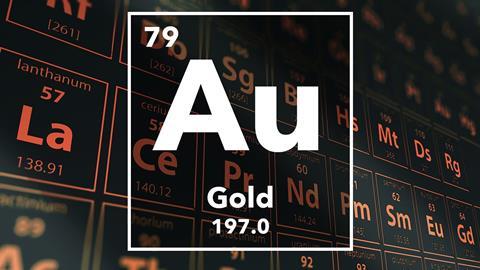 Hello, in this week's episode of Chemistry in its Element, we're taking a flight on Concorde, dropping by Buckingham Palace and finding out what could form a film just 230 atoms thick. Going for gold for us this week, here's the legendary science broadcaster and populariser Johnny Ball.

The element gold. Gold is element 79 and its symbol is Au. Though the name is Anglo Saxon, gold originated from the Latin Aurum or shining dawn and previously from the Greek. Its abundance in the earth's crust is 0.004 ppm.

100% of gold found naturally is isotope Au197. 28 other isotopes can be produced artificially and are all radio-active. 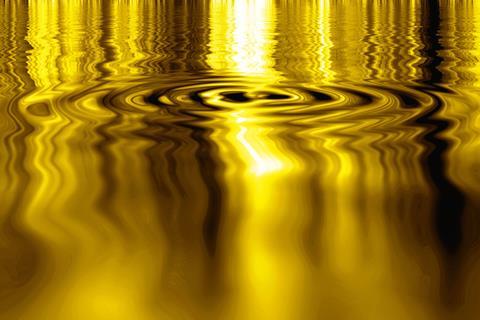 Gold in its most beautiful form: liquid

Gold along with silver and copper, form a column in the periodic table. They are found naturally and were the first three elements known to man. They were all used as primitive money well before the first gold Coins which appeared in Egypt around 3400 BC.

Most gold is ancient or comes from Central American Aztecs and South American Incas brought to Europe by the Spanish and Portuguese in the 16th century, and which has since been recycled over and over again. In 1830 world output was no more than 12 tonnes pa. Finds were discovered chronologically in Siberia, California in 1849, New South Wales and Victoria in 1851, Transvaal in 1884, the Klondike 1896 and Alaska in 1900, and world production was then around 150 tonnes. It is now around 2300 tones pa.

Because it is found in its natural state and does not naturally alloy with anything else and because it is the heaviest metal, by sifting rock in water, the gold always falls to the bottom and all less dense impurities are washed away – it's that simple.

The largest nugget was the Welcome Stranger nugget found in Victoria, Australia in 1869. It weighed over 71kg of which 65kg became refined or pure gold. This type and size of nugget is unique. Pure gold is 24 karat. 18 karat is 75% and 12 karat is 50% pure gold.

Gold is the most malleable of all metals and soft enough to be cut with a knife. Stone age peoples hammered gold into plates for ornamental purposes. Really quite large amounts were gathered together. Though King Tutankhamun was a minor Pharaoh and died aged 18, his coffin alone contained 112kg of gold. Egyptians also made thin gold sheets, utensils, vast varieties of jewellery and even gold thread.

Today 1 gram can be beaten into a square-metre-sheet just 230 atoms thick. 1cu centimetre would make a sheet of 18 square metres. Concord's windscreen had a layer of gold to screen pilots from UV light and today it is often used in skyscraper windows to cut down both heat and UV from sunlight. 1 gram can be drawn to make 165 metres of wire 20um (microns) thick (1/200th of a millimeter). 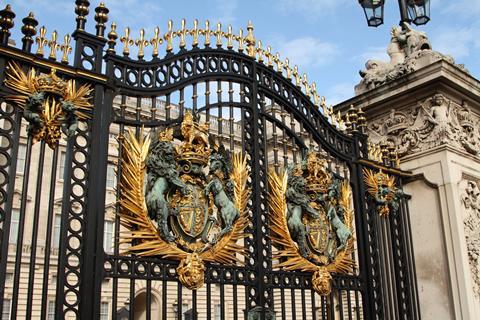 The gold colour in the Buckingham Palace fence is actually gold covered, as it lasts 30 years, whereas gold paint – which contains no gold at all – lasts in tip-top condition, only about a year.

Sea water contains around 3 parts in a billion of gold, but there's never been found an economic means of recovering it. The Germans tried very hard during the 2nd WW but failed miserably.

The largest modern hoard is the 30,000 tons in the US Federal Reserve Bank in New York, which belongs to 18 different nations. It is estimated that all the world's gold gathered together would only make a cube around 18 metres per side – about 6000 cubic metres. And that's gold.

So now you know why pirates used to bite gold coins to see if they were real. It wasn't just for the camera because it looked good, it was because the metal was soft enough to be marked by teeth. That was Johnny Ball telling the story of gold. Next time on Chemistry in its Element Victoria Gill introduces the chemical that founded the science of photography and also helped to launch the careers of successions of Oscar winners.

In 1840, Henry Talbot discovered an additional chemical twist, that a so called latent silver image, that had been briefly exposed onto a layer of silver iodide could be revealed using gallic acid. The effect was seen as magical, a devilish art. Hollywood could never have existed without the chemical reaction that gave celluloid film its ability to capture the stars and bring them to the aptly dubbed silver screen.

And you can hear Victoria Gill crossing your cognitive palm and lining your intellectual pocket with silver on next week's Chemistry in its Element. I'm Chris Smith, thank you for listening, see you next time.