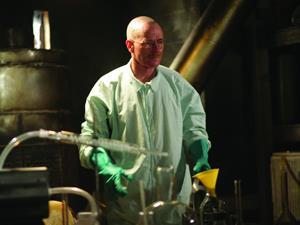 Breaking Bad may have exaggerated its body-dissolving effects, but Katrina Krämer finds the truth about hydrofluoric acid is just as gruesome

‘Why you got me running around town, trying to find some stupid piece of plastic, when I have a perfectly good bathtub I can use?’ Breaking bad character Jesse Pinkman asks his partner, chemistry-teacher-turned-drug-producer Walter White, in the American TV series’ second ever episode. The reason soon becomes apparent, when the ceiling stunningly collapses, bringing a flood of clumpy red fluid with it – the half dissolved body of a rival drug dealer. White and Pinkman had tried to dispose of the body by dissolving it in hydrofluoric acid.

While the acid’s body-dissolving effects were grossly exaggerated in the TV series, hydrofluoric acid, or HF, does indeed need to be stored and used in plastic containers as it slowly dissolves many materials, including the fibreglass many modern bathtubs are made of. HF slowly dissolves silicon dioxide – the major component of most types of glass – by forming water-soluble hexafluorosilicic acid and gaseous silicon tetrafluoride. Chemists use the acid’s ability to etch glass for removing particularly stubborn stains from laboratory glassware and it is an invaluable tool in the semiconductor industry for cleaning silicon wafers.

There are certainly stronger acids than HF – with a pKa of only 3.2 it is weaker than other hydrohalide acids and a long way off superacidic fluoroantimonic acid with its extraordinary pKa of -25. The reason for HF’s meagre acidity is the strong bond between the hydrogen and the fluorine atom, resulting in only partial ionisation in dilute solutions. As is the case with other hydrogen halides, hydrofluoric acid is the aqueous solution of the colourless gas hydrogen fluoride. Commercial hydrofluoric acids contain about 50% HF, the most concentrated ones up to 75%. Interestingly, when the HF concentration approaches 100%, something curious happens: in a process called homoassociation, polyatomic ions such as HF2- and free protons form, leading to a dramatic increase in acidity.

Swedish pharmaceutical chemist Carl Scheele discovered hydrofluoric acid in 1771, when he investigated the composition of a mineral called fluorspar: Calcium fluoride. At a time when the element fluorine was unknown and all acids were thought to contain oxygen, Scheele noticed the glass-etching properties of the fumes that developed when heating fluorspar in sulfuric acid. Leading the fumes into water, he was the first to make large quantities of hydrofluoric acid. The exposure to HF – along with Scheele’s bad habit of tasting and smelling the substances he discovered – might have been one of the causes for his death at the age of just 43.

As nasty as HF might sound, a world without hydrofluoric acid would be pretty bleak

It is natural to expect hydrofluoric acid to be corrosive, but to make things worse, HF is also a strong contact poison. The acid readily penetrates the outer layers of the skin and interferes with nerve function – burns might not be immediately visible and can even remain painless, meaning accidental exposure can remain unnoticed for hours. At the body’s neutral pH, hydrofluoric acid dissociates and produces a flood of fluoride ions, which react with the abundant calcium and magnesium ions, forming insoluble salts. Alkaline metal ions are essential for the body’s proper function; their loss stops muscles working and corrodes bones. Even relatively small HF burns, about the size of the palm of your hand, can cause an array of unpleasant medical effects such as pulmonary oedema (fluid accumulation in the lungs) and life threatening cardiac arrhythmia (decreased or irregular heartbeat). Doctors treat HF poisoning with calcium gluconate injections or calcium chloride infusions to remove the fluoride ions before they devour the body’s own calcium and magnesium. 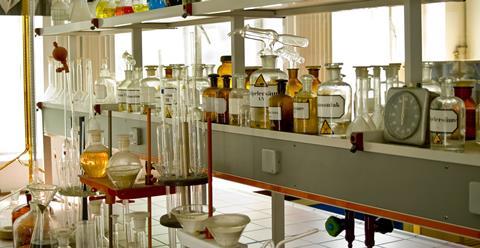 Sometimes, such as in the case of an unfortunate Australian technician, the acute fluoride poisoning can be fatal. Dissolving rock samples with hydrofluoric acid, the technician spilled a medium-sized beaker of 70% HF onto his lap – an area of about 10% of his body’s total surface. Despite immediately hosing himself and receiving treatment an hour later, the man became unconscious and died of multi organ failure two weeks later.

However, as nasty as HF might sound, a world without hydrofluoric acid would be pretty bleak. It is industry’s main source of fluorine – pharmaceuticals, refrigerants and fluoropolymers such as Teflon all rely on hydrofluoric acid.

The Royal Society of Chemistry’s Katrina Krämer there, with the harsh chemistry of a somewhat essential compound. Next week, the lesser appreciated coding of life.

Most life stores information in DNA which is stable and able to preserve the organism’s genome. But in the case of some viruses, RNA is used to store the genetic information. In the case of these viruses, the instability of RNA can actually be advantageous.

Discover how with Andrew Holding in next week’s Chemistry in its Element. Until then, thank you for listening, I’m Meera Senthilingam.