The murderers who used chemistry to try and cover their tracks

Arrhenius, Brønsted-Lowry, Lewis… chemists have many ways to define and distinguish acids from bases. Forensic scientists have a way all of their own – how these substances destroy soft tissue, hair, nails, teeth, and bone.1-3 This interest isn’t just about mythbusting TV shows such as Breaking bad, whose protagonists used hydrofluoric acid to dispose of a corpse; it also serves a practical purpose in the careful study of how killers attempt to cover their tracks. 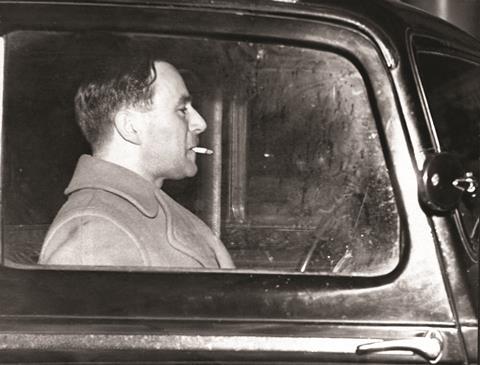 The annals of crime are filled with gruesome tales of using chemicals for body disposal. In the mid-to-late 1940s, one of England’s most notorious killers, John Haigh, used sulfuric acid to dispose at least six victims’ corpses – a method that led to him being dubbed the ‘acid bath killer’. The Arellano-Félix Organization, a real-life cartel that inspired a storyline in the 2000 movie Traffic, used sodium hydroxide to dispose of rivals’ corpses. In 2003, American biochemist Larissa Schuster used hydrochloric acid in a scheme to get rid of her husband. Thanks to the work of forensic scientists, we can piece together exactly what happened in these attempts to remove a corpse.

When it comes to soft tissue, select acids and bases – typically H2SO4, HCl, NaOH, and KOH – wreak destruction via hydrolysis of large biomolecules (such as proteins, lipids, carbohydrates and nucleic acids), with possible further demolition of smaller units. Alkaline hydrolysis is considered to have the edge over techniques involving acid (and is preferred in legitimate animal carcass disposal),* most likely because of the increased cleavage of the disulfide bonds that are key for the structural integrity of proteins.

This better cleavage also explains why bases breakdown hair and nails more quickly than acids. Hair is primarily composed of keratin proteins, which are packed with the amino acid cysteine and therefore have extensive disulfide bonds. These contribute to the strength and stability of keratin, and help to resist solubilisation by solvents that readily dissolve other proteins. Disufide bonds, however, fall prey to alkaline hydrolysis: hair dissolves in minutes in bleach or NaOH (something anyone with a blocked sink or shower knows). Nails are also full of keratin; as with hair, researchers have observed they are more susceptible to destruction by bases than acids.1

Acids at very low pH beat bases when it comes to destroying bone and teeth,1-5 most likely because of the greater solubility of calcium apatites in acidic conditions. However, destruction of bone in acidic conditions is no quick job;1-3 at room temperature and atmospheric pressure, it can take nearly a day – or longer, depending on the acid – for bone to dissolve when fully submerged. A team led by Cristina Cattaneo from the University of Milan, Italy, has examined the effect of acid and base immersion on porcine bones macroscopically, microscopically, and chemically.2-3 They noted differences in appearance (macro- and microscopically) and the degree of damage between acids and bases used in their study. Essentially, while acids to a better job in dissolving bone, highly concentrated and strong bases still cause significant damage. Cattaneo’s group described the aftermath of using alkaline solutions on bone in the Journal of Forensic Science thus: ‘At first glance, bone appeared structurally intact, but extremely fragile as complete and immediate crumbling occurred with a simple touch’.2 I describe it as feeling similar to, and as easy as, crumbling shortbread.

How do I know? Because I observed the process myself, using readily available base and acid supplies purchased from a local DIY store. The base was pellet lye (NaOH) marketed to clear blocked pipes, while the acid was muriatic (HCl) used to balance pool pH. Like other researchers, I used porcine samples – in this case, pork ribs and pork neck bones. Over a work week, I monitored the destructive processes, noting the different appearance of the acidic and basic solutions. Both did a frightening job of degrading the tested samples – something you can see for yourself in the video above.

If my deeds had been nefarious, would I have gotten away with it? Probably not – much like all the perpetrators mentioned earlier. In purchasing supplies, I was recorded on store security video and the store has records of my purchase. Such video or paper trails are often revealed during investigations, and are one of the main reasons why chemical disposal research is performed; if investigators know whether an acid or base was used they can check who purchased or had access to such chemicals. 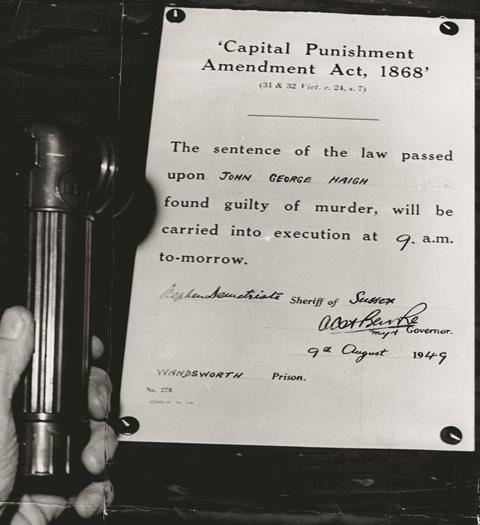 Haigh was hanged in 1949 for his crimes

Indeed, when employing chemistry to destroy a corpse, it is likely that only partial destruction will occur. Even with the small samples I treated over a series of days, there was still remaining material available for analysis. As Cattaneo’s team notes: ‘…it is conceivable that a possible attempt to destroy an entire body… is a thoroughly different task from destroying small samples.’2

Schuster learned this lesson the hard way. She placed her husband’s body in a barrel of HCl, and stored the gruesome container in a storage locker. Investigators easily located the unit with help of a witness and a paper trail, and readily identified the remains. In 2008 she was sentenced to life without parole.

And even if the disposal is successful, as in the case of Haigh, police work can still solve the crime. Dogged investigators found 28 pounds of human body fat, part of a foot and a denture on Haigh’s property, after which he confessed to the crime. He was hanged in 1949.

Perhaps Geoffrey Chaucer had it right in The Canterbury Tales – murder will out.

*The legitimate disposal of animal carcasses via alkaline hydrolysis is often done at high temperature and pressure to accelerate the process, which requires speciality apparatus. Such apparatus is not readily available and its acquisition, or unauthorised use, would raise alarms. Alkaline hydrolysis as an alternative to burial or cremation of human remains (‘green cremation’) is controversial and not widely available.