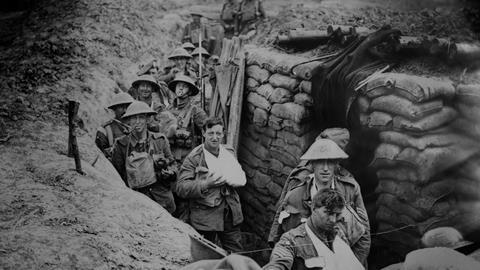 How chemical weapons inspired the birth of cancer chemotherapy

This week, how a viscous vesicant – a blister-causing agent used against troops in the first world war – inspired some of the earliest trials for anti-cancer drugs. Here’s Mike Freemantle.

My father served in the British army during the second world war. I remember him telling me, much to my surprise, that good could come from the horrors of war. He referred specifically to advances in surgery and medicine. I was too young at the time to ask him what these advances were. But now I have at least some of the answers.

New Zealand born surgeon Harold Gillies provided one of them. He pioneered plastic surgery during the first world war and is considered to be the founding father of the technique. After the battle of the Somme in 1916, for example, he performed some two thousand operations at hospitals in the south of England on soldiers whose jaws and faces had been mutilated. Later, in the second world war, he established plastic surgery units throughout Britain and was in charge of the largest of these – which was located at the Park Prewett Hospital in Basingstoke. 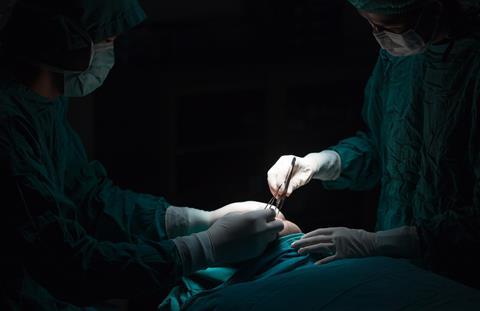 The birth of cancer chemotherapy can also be traced back to the first world war. In 1917 and 1918, armies on both sides of the conflict fired shells containing an oily liquid known as sulfur mustard or mustard gas. This was perhaps the most notorious of all the chemical warfare agents used in the war. So how did good come out of this form of chemical warfare?

The answer lies in the abnormally low white blood cell counts of soldiers who had been exposed to sulfur mustard. Over the following years, scientists began to investigate the possibility that the compound might be used as a drug to suppress the rapid division and proliferation of blood and bone marrow cells that result in leukaemia and malignant tumours of the lymph nodes known as lymphomas. The drug, however, sadly proved ineffective.

The mustard gas used in the first world war was just one of several sulfur mustards. There is also another important group of mustard compounds. In 1935, scientists synthesized nitrogen mustards, or chloroalkylamines, for the first time. They have similar chemical structures to the sulfur mustards and are also vesicants. Nitrogen mustards have fishy odours and are highly toxic. Three of them, known as HN1, HN2 and HN3, were produced and stockpiled for use as chemical warfare agents in the second world war. They were never used. 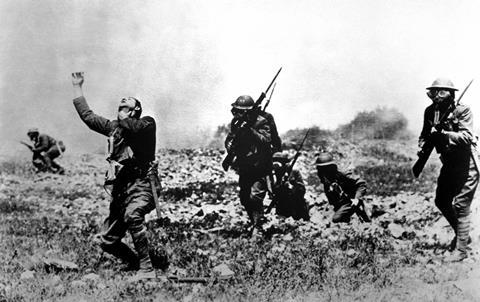 In 1942, pharmacologists Alfred Gilman and Louis Goodman at Yale University began to investigate in strict secrecy the possible clinical use of nitrogen mustards for cancer chemotherapy. They soon showed that these mustards are cytotoxic, that is, they damage or destroy living cells.

‘Early in the course of the study of the nitrogen mustards certain basic observations were made. It was immediately appreciated that in addition to a local vesicant action, the nitrogen mustards were cytotoxic following absorption. Death of experimental animals was the result of systemic effects even after topical application to the skin.’

In particular, one of them, HN2, offered promise as a drug for treating lymphomas. The compound is variously known as mechlorethamine, chlormethine, or simply mustine. Its full chemical name is bis(2-chloroethyl)methylamine.

In 1943, Gilman and Goodman persuaded a colleague and leading thoracic surgeon at Yale to participate in a clinical trial of mustine. The surgeon administered the compound intravenously to a patient suffering from advanced lymphosarcoma. Within a few days, the tumours in the dying man’s head and neck reduced in size significantly. The tumours returned however, when the treatment was stopped. A second dose of mustine had less impact on the tumours and a third dose no effect at all. The cancer cells had developed resistance to mustine. 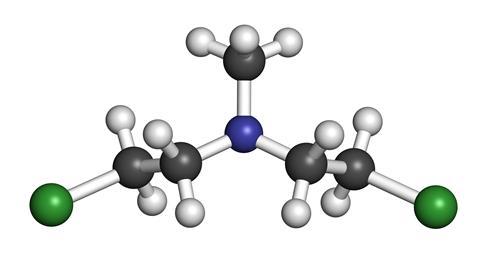 Gilman and Goodman carried out further trials and reported their results in a landmark article published in 1946. It was soon realised that the biological action of mustine as an anti-cancer agent was due to its power of alkylation. Its ethyl groups prevent cell division and duplication by binding to guanine, one of the four bases in DNA.

Nowadays, mustine is not widely used in cancer chemotherapy. Other nitrogen mustards, such as cyclophosphamide, and other types of organic compounds are more often used as alkylating agents in cancer treatment, commonly in combination with other anti-cancer drugs that work in different ways. Even so, the study of nitrogen mustards in general and mustine in particular during the second world war resulted in an explosion of interest in the use of cytotoxic compounds to treat cancer patients. The spark that led to that explosion undoubtedly originated with the observation that soldiers who had died or were suffering from mustard gas poisoning had low white blood cell counts.

That was Mike Freemantle on mustine and the birth of cancer chemotherapy. Next week, Kiki Sanford is back with a compound discovered in the 1600s through, ahem, self-experimentation.

When Monty Python sang that ‘every sperm is sacred,’ in their classic hit of the same name from the movie The Meaning of Life, I hardly imagine that they were thinking about the influence of sperm on biochemistry.

Discover the intriguing properties of spermidine with Kiki next week. Until then, get in touch through the usual channels – email chemistryworld@rsc.org or tweet @chemistryworld. I’m Ben Valsler, thanks for joining me.