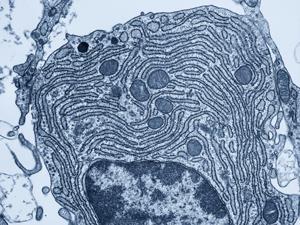 This week, a compound with some surprising chemistry. Brian Clegg reveals it all.

When it comes to elements we meet in everyday life, osmium doesn’t come high on the list. Let’s face it, a metal that is best-known for being used in an alloy in fountain pen tips isn’t exactly the substance-de-jour. Yet its compound with oxygen, osmium tetraoxide, is both versatile and surprising. 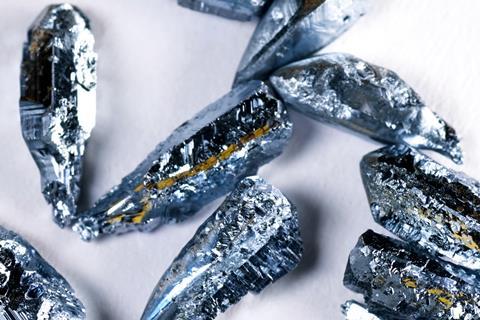 The surprise comes from the physical structure of the substance. Osmium tetraoxide’s tetrahedral molecule (reminiscent in shape to the metal jacks in the children’s game) sublimes at a high room temperature, going straight from solid to vapour. This isn’t ideal as the substance is highly toxic – if you can smell its sharp odour, which has been likened to both chlorine and ozone, it is already at a concentration that can cause serious damage to the lungs and possible death. Despite this, the compound has been used medically in Scandinavia where it has been injected to act on arthritic joints.

Crystals of the oxide should probably be colourless, but in practice they seem to always have a yellowish tint, which is suspected to be caused by contamination with the brown osmium dioxide. Because osmium is a rare (and valuable) metal, it might seem that the oxide would be little more than a curiosity for the chemist’s display cabinet, but in fact this expensive compound has a number of roles in the laboratory that it fulfils well enough to be worth the expense.

Osmium tetraoxide remains something of an enigma

Several of the applications revolve around staining for electron microscopy (and occasionally optical microscopy). One of the hazards of handling osmium tetraoxide is that it can cause blindness by staining the cornea – the transparent outer section of the eye – cutting out light transmission. For those using transmission electron microscopes, though, its ability to bind onto double bonds of lipid molecules, blackening the surface, is extremely valuable. By embedding osmium into cell membranes it makes them clearly visible to the electron beam, transforming the image and making a clear contrast between the membrane and the protoplasm inside the cell. It also has the advantage of stabilising proteins in tissues, keeping the structure in place where otherwise it might collapse as water is removed from a sample.

Electron microscopists find osmium tetroxide’s staining capabilities equally helpful when studying the detailed structures of some plastics, as it binds better with particular types of polymers, bringing out the structure of the material. The staining capability has also been used experimentally in fingerprint detection, but the combination of cost and toxicity meant that it would never be an everyday CSI technique. Given the dangerous nature of the compound it does present something of a challenge to chemists to keep safely in the laboratory, but luckily it combines with the organic compound hexamethylenetetramine to form golden crystals known as osmeth. These are stable at room temperature, avoiding the production of poisonous fumes, but can be easily reconstituted as osmium tetraoxide when required. 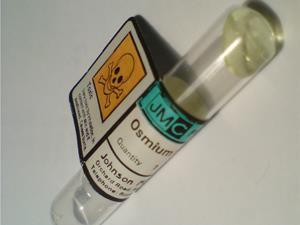 Osmium tetroxide is highly poisonous and can cause death if inhaled

The compound is also a powerful oxidising agent and is most frequently used to oxidise alkenes, adding pairs of hydroxyl groups to the same side of organic compounds (known as syn diols). It can play a catalyst role too in the Sharpless oxyamination process to produce amino-alcohols used in further organic synthesis, a mechanism that won the eponymous Karl Sharpless the Nobel prize in chemistry in 2001. It even plays a role in the production of osmium itself, as the oxide is produced as a residue in small quantities when refining a number of metals, notably nickel and copper. The characteristic, pungent odour of the oxide gave osmium its name, which discoverer Smithson Tennant derived from the Greek word ‘osme’ which means a smell.

In April 2004, osmium tetraoxide made the news when it was reported that a terrorist plot had been foiled in the UK when the US National Security Agency (NSA) and the UK’s Government Communications Headquarters (GCHQ) intercepted phone calls and emails planning to use the compound mixed in with a conventional explosive to produce a terror weapon. It’s true that the presence of the compound could increase the explosive force of the bomb, and might increase its capability to cause fear and confusion by producing fumes that could cause blindness or choking – but there was a certain amount of doubt about the likelihood of such a nefarious scheme.

The biggest problem is simply the cost of the material, comparable with the value of platinum. Weighing in at around £100 a gram at the time, and not easy to obtain in large enough quantities to make its use worthwhile – world production of osmium is probably less than a tonne a year – it seemed an unlikely substance for bomb makers to include. To kit a bomb out with sufficient osmium tetraoxide to make an effective weapon would require spending at least the cost of a decent sized detached house. In London at that. And it would need a confined environment if there was any hope of getting the material to the intended victims in large enough quantities.

Osmium tetraoxide remains something of an enigma. Toxic yet valuable for examining microscopic forms. A useful reagent and catalyst, but possibly the payload of a dirty bomb. But however it’s used, it is hard to imagine anyone describing this precious substance as ordinary.

Science writer Brian Clegg there, with the extraordinary chemistry of osmium tetraoxide. Next week, an experiment.

First you crush some crystals of potassium permanganate to a fine powder, then you make it into a volcano-cone shaped heap, on a heat-proof mat. Just make a small dent in the top of the cone, then get a dropping pipette/dropper and slowly drip the glycerol onto it. After a few seconds, the mixture starts smoking and then it bursts into flames at the top.

Simon Cotton explains the chemistry behind this in next week’s Chemistry in its Element. Until then, thank you for listening, I’m Meera Senthilingam.