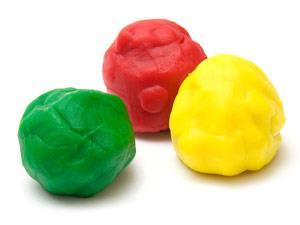 Brian Clegg tells us about a silicone gel, which can sometimes be a bit silly

This week, Brian Clegg gets a bit silly

If, like me, you were a child in the 1960s, one of the must-have toys was silly putty, originally known, rather unfortunately, in the UK as potty putty. Like custard and ketchup, these balls of rubbery gel were, in fact, made up of a non-Newtonian fluid – in the case of the silly putty a viscoelastic substance that would, with time, flow like a very sticky liquid, but that became an elastic solid under pressure, so that you could bounce it like a ball. The compound behind silly putty’s unusual characteristics is polydimethylsiloxane. 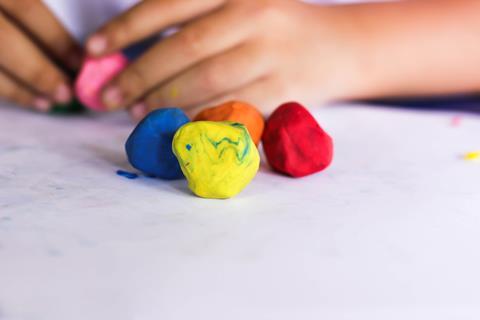 This clear organic polymer has a relatively simple repeating section of C2H6OSi and forms the simplest of the family of polymerised organo-silicon compounds that are loosely referred to as silicones. Although it’s not the compound’s main application, polydimethylsiloxane, or PDMS for short, does turn up in the most immediate association many members of the public have with ‘silicone’, as the viscous liquid filler of breast implants.

Although it is by no means the only substance in silly putty, with the main component being dimethylsiloxane, PDMS remains the substance that defines its behaviour. The product was originally developed following the rubber shortage during the second world war when many synthetic alternatives were researched, though it was not until the 1960s that both silly putty and PDMS began to be widely available.

The production of the compound begins with methyl chloride and silicon which are reacted together in a heated chamber, catalysed by copper oxide, to produce dimethyldichlorosilane, which is then reacted with water in a polymerisation process to produce PDMS. Variants of the procedure are used to produce different viscosities of material, from short chained liquids to long chained rubbery solids. A slightly different reaction process is also used that release acetic acid, rather than the usual hydrochloric, where the substance is going to be cured on-site in sealing materials and adhesives.

We might tend to associate PDMS with toys and silicone implants, but the range of uses for this versatile polymer is huge. By nature it is hydrophobic, presenting a shiny outer surface that water simply rolls off without wetting, so it’s not surprising to find PDMS in water-repellent materials used in car washes and waxes. But it also turns up in surfactants, drugs, and as a foam reduction agent in oils, even in some cooking oils to reduce splattering – which has resulted in newspaper horror stories about the dangers of silly putty in fast food. 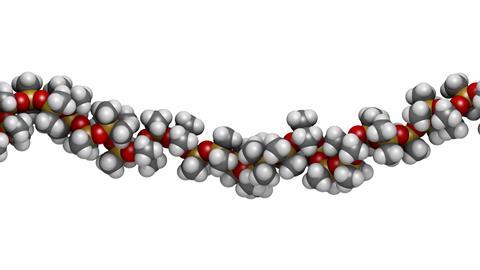 It’s not a stranger to our skins either, where it turns up in moisturisers as a skin protection agent, both protecting the skin against some aggressive substances, reducing the risk of dermatitis, and making use of that ability to resist water to keep moisture in place. It’s also included in some hair conditioner and even as one of the weapons in the armoury against head lice, which it kills by engulfing the adults, preventing them from breathing.

Technologists also love this rubbery goo, which is amongst the most common materials used in a variant of the process that produces computer chips called soft lithography. This is a versatile technique where stamps or moulds constructed from PDMS are used to produce very detailed flat structures in the range from micrometres to nanometres in scale. The main applications tend to be in biological and medical systems where complex narrow fluid systems, called microfluidics in a parallel with microelectronics, are constructed to develop lab on a chip devices. Increasingly the techniques are also used in extremely small-scale optical technologies.

Reflecting its unusual physical properties, PDMS has proved one of the effective compounds to be deployed in the relatively new science of self-healing materials – inert substances that can to some extent duplicate the healing abilities of living tissue. A matrix of a vinyl material is produced with droplets scattered through it that contain a mix of PDMS derivatives, which remain in place thanks to their viscosity. However, if the material is distorted and cracks, microcapsules of a catalyst burst, mix with the droplets and produce a healing material that sets into the crack and repairs the damage.

This is a substance that all too easily could have been just a bit of bouncy fun, the rubbery equivalent of playing with the remarkable non-Newtonian capabilities of custard. It also shows its entertaining side when mixed with sand, producing a substance known as ‘kinetic sand’ that crosses the boundary between sand’s granularity and a solid. But instead, polydimethylsiloxane has proved to be as versatile as silly putty was entertaining. It is a true polymer for all seasons.

Science writer Brian Clegg, revealing how silly putty is not so silly, through the versatile chemistry of its compound, polydimethylsiloxane. Now next week, Simon Cotton gets your pulse racing.

Use of the word suggests that your heart rate’s speeded up and you’ve got more energy. The ‘adrenaline junky’ is someone who seeks out and craves thrilling adventures, whilst the common phrase ’a shot of adrenaline’ implies some kind of reinvigoration.

Find out the chemistry behind these effects  in next week’s Chemistry in its Element. Until then, thank you for listening, I’m Meera Senthilingam.