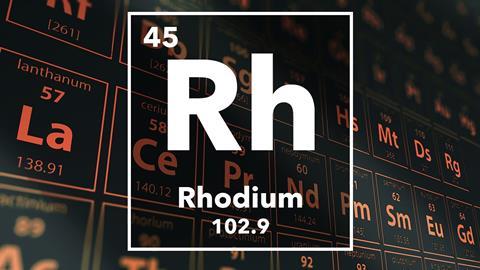 This week, an element whose rarity and reluctance to react make it oh so special. Here's Lars Öhrström.

On an early spring day 21 years ago I walked excitedly down to the campus post office at the Royal Institute of Technology in Stockholm to fetch a small parcel, containing an even smaller plastic bottle, half filled with a purple powder. I respectfully signed for the package and solemnly carried it back with me to the laboratory, as the 50g of rhodium chloride it contained represented more than half a years earnings for a PhD student like me.

Thus started my love story with rhodium, and although I have frequently been unfaithful since, to my disgrace with such prosaic metals as zinc and calcium, this transition metal, with atomic number 45, still has a special place in my heart. 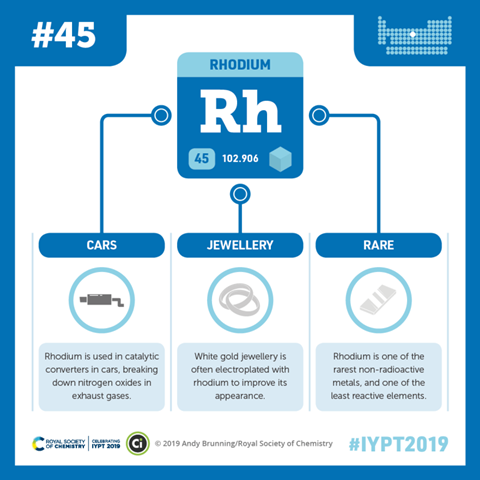 Rhodium chloride, that sounds much like sodium chloride, but the resemblance is only superficial. First of all, my rhodium atoms were in oxidation state three, thus requiring three chloride ions for every metal ion, and then, of course, there is the royal colour. However, the differences are much more profound as the chemistry of rhodium is much more diverse than that of sodium.

Our rhodium chloride was to be used as starting material for new rhodium compounds that we planned to make and study as catalysts – species that make a reaction go faster without being consumed in the process. In these catalysts, rhodium is often in the oxidation state plus one or plus three.

It would have been cheaper to buy silver-shiny rhodium metal instead. However, this would have been impractical as this noble platinum-group element is one of the least reactive metals of the periodic table. It reacts only reluctantly with the alchemist's famous aqua regia, the potent mixture of concentrated nitric and hydrochloric acids that easily dissolves gold. This was however the procedure used by English scientist William Hyde Wollaston when he first isolated rhodium from a sample of platinum ore, smuggled into Britain from present day Colombia, and purchased by Wollaston and his friend and colleague Smithson Tennant on Christmas Eve in the year 1800. 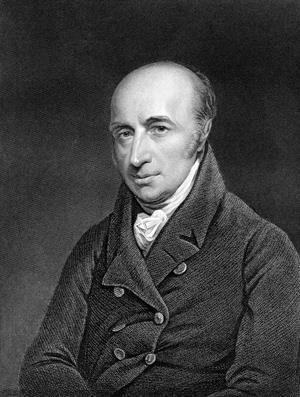 This sample yielded not only rose coloured solutions of rhodium chloride, prompting Wollaston to give the new element the name rhodium - from the Greek word for rose - but he could also isolate palladium for the first time. Tennant also discovered the transition metals osmium and iridium in the same sample.

While in my research group we were interested in building up organic molecules using rhodium compounds as catalysts, most people come in contact with this metal due to its ability to catalyse the breakdown of molecules in car exhaust fumes. Although 'come into contact' is a bit of an overstatement as the parts of a car that contain rhodium, the catalytic converter, is normally not accessed by the amateur mechanic.

However, it is accessible enough on certain car models that theft of these noble metal containing devices, there is also palladium and platinum present, is becoming a problem. This is a reflection of the extreme rareness of these elements, explaining the very high price of the rhodium chloride I bought as a graduate student. They are in fact so rare that annual production is counted in kilos, not tonnes. And yes, the metals from the catalytic converters are recycled, accounting in these days for around 10 per cent of the yearly supply of rhodium, the lion's share of the rest, around 20,000 kilos, coming from mines in South Africa. 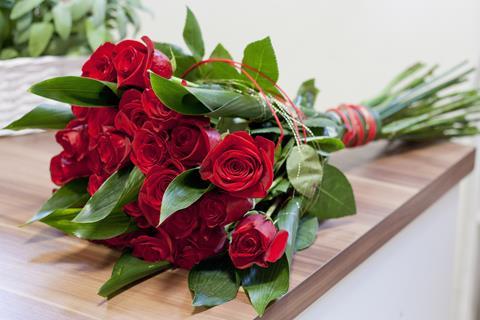 The specific role of rhodium in catalytic converters is to break down nitrogen oxides, the so-called NOX emissions, to give oxygen and nitrogen gas, the main components of the air we breathe.

Chemical industry is, just as my old research group, interested in using rhodium to build molecules. Rhodium was, for example, until recently the prime choice as catalysts in making one of mankind's oldest chemicals, acetic acid. It supplanted its periodic table upstairs neighbour cobalt in this process in the late 1960s in a prime example of what is now know as green chemistry making the process more energy efficient and generating less by-products. This is important as chemical plants worldwide produced some 5 million tonnes per year of acetic acid. Today, however, rhodium's downstairs neighbour iridium has largely taken over this role. 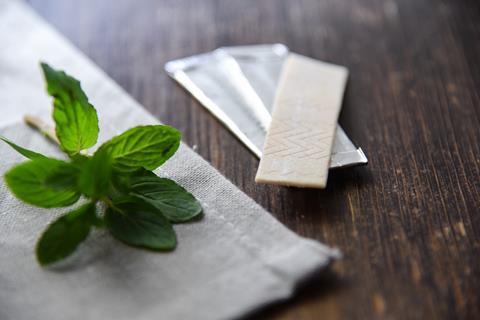 And, if you chew gum you will most likely encounter another result of rhodium catalysis: menthol. Originally extracted from different species of mint plants, the demand for this substance with its characteristic minty scent far exceeds the natural sources, and it is now produced in several thousands tonnes a year in a process devised by Japanese Nobel prize winner Ryoji Noyori.

So, instead of associating this metal with immense wealth, such as when the Guinness Book of Records awarded Paul McCartney a rhodium-plated disc for being history's all-time best-selling songwriter and recording artist in 1979, chewing gum may be what pops up in your mind the next time someone mentions rhodium.

So we have rhodium to thank when our breath is minty fresh. That was Lars Öhrström from the Chalmers tekniska högskola in Sweden, with the rare precious chemistry of rhodium. Now next week an element with a grand position in the periodic table.

The number 100 is a very significant one for human beings. It's partly because our number system is based on ten - so ten tens seems to have a special significance. In years, it's around the maximum lifetime of a human being, making a century more than just a useful division in the historical timeline. But in the natural world, 100 isn't quite so important. There's nothing about being element 100 that makes fermium stand out – the periodic table doesn't attach any significance to base 10. But it's hard not to think that fermium must be special in some way.

And to find out if fermium really does have any special qualities, join Brian Clegg in next week's Chemistry in its element. Until then, I'm Meera Senthilingham and thank you for listening.