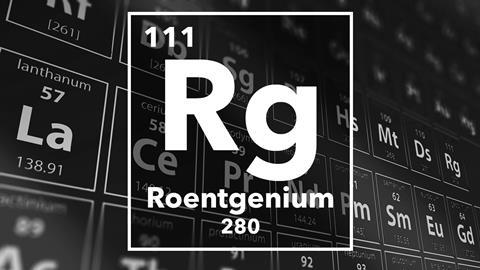 This week an element that needs just the right conditions in order to get a successful collision. Here's Simon Cotton

I used to be able to go into my chemistry lab, look the pupils in the eye, and say 'U-U-U'. And they would say 'What have I done, Sir?' 'You've done nothing wrong' I would reply, 'I am talking about element 111, unununium, symbol Uuu'. 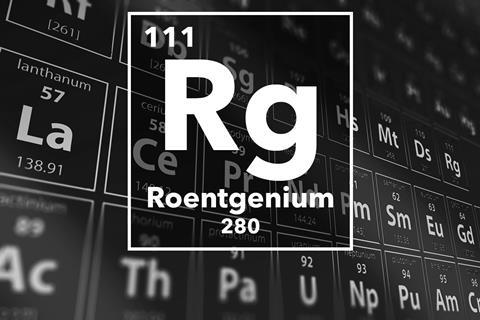 Roentgenium was in fact discovered 10 years earlier on December 8, 1994, by a team of 13 nuclear physicists working at the Gesellschaft für Schwerionenforschung at Darmstadt in Germany carried out an experiment, bombarding a target of 209Bi with 64Ni ions. The idea was to make the nickel ions penetrate the bismuth nucleus, so that the two nuclei would fuse together, making a bigger atom. The energy of the collision had to be carefully controlled, because if the nickel ions were not going fast enough, they could not overcome the repulsion between the two positive nuclei, would just fly off the bismuth on contact. However, if the nickel ions had too much energy, the resulting 'compound nucleus' would have so much excess energy that it could undergo fission and just fall apart. The trick was, like Goldilocks' porridge, to be 'just right', so that the fusion of the nuclei would occur, just. 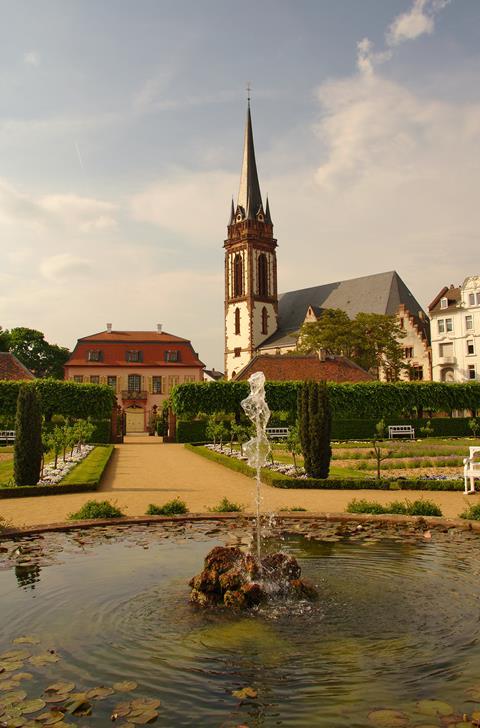 Successful collisions would not occur very often, as most of an atom is empty space. The scientists were however able to observe three successful collisions, forming atoms of atomic number 111 and mass 272. They were very short-lived, with a half-life of around one and a half milliseconds. The new atoms were identified by following what happened to them when they decayed – they underwent alpha decay successively forming atoms of elements 109, 107, 105 and 103. In further experiments carried out in 2000, the team carried out more bombardments and observed another three more atoms of element 111. This time they followed the decay chains even further, right down to mendelevium-252, element 101. 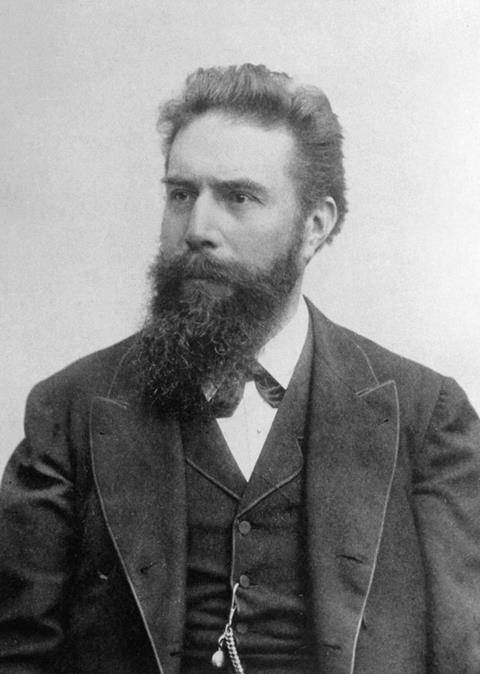 The discovery of this new element was first announced in a paper published early in 1995. It was given a temporary name of unununium, derived from its atomic number, and the symbol Uuu. No permanent name was assigned to element 111, as independent confimation of its existence was needed, and this did not happen until 2003, when a team at the RIKEN Linear Accelerator facility in Japan made 14 atoms of this isotope. The workers at Darmstadt were then given the honor of proposing proposed the name Roentgenium, in recognition of Wilhelm Conrad Roentgen, who discovered X-rays in 1895.

No one knows for sure what roentgenium looks like, but it has been placed under copper, silver and gold in the Periodic Table. Theoretical chemists have had fun predicting its properties, and they think that if anyone ever sees any roentgenium metal, it is likely to be silver in colour and it will be very unreactive. Its chemistry is predicted to involve the +3 and +5 oxidation states.

When scientists made element 115 back in 2004, they identified in its decay chain a roentgenium isotope of mass 280 with a half life of about 3.6 seconds. So if it can be made directly, there is the possibility of real chemical reactions being studied.

So, ladies and gentlemen, that is roentgenium, which looks like being a very precious metal, albeit only for a few seconds.

So blink and you may just miss the magic. That was Uppingham School's Simon Cotton with the speedy yet precise chemistry of roentgenium. Now next week we've got a two-faced element.

chlorine is what you might describe as a Jekyll and Hyde element; it is the friend of the synthetic chemist and has found a use in a number of 'nice' applications such as the disinfecting of drinking water and keeping our swimming pools clean. It also has an unpleasant side, being the first chemical warfare agent and taking some of the blame for the depletion of the Earth's ozone layer.

So is it friend or is it foe? Join Bristol University's Tim Harrison to find out in next week's Chemistry in its element. Until then I'm Meera Senthilingam and thank you for listening.