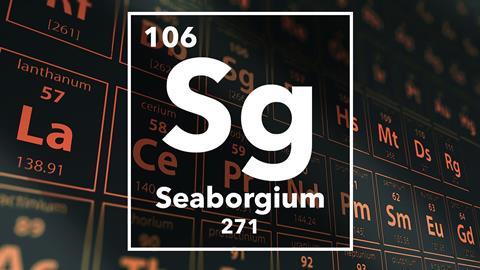 Hello, this week we're meeting a chemical that you won't find much of because at the most scientists have only ever managed to make just a handful of its atoms. It's named after the man who discovered plutonium and with it the fact that by crashing atoms into one another we can make entirely new elements. But this week's element is a controversial chemical and to explain why here's Philip Ball.

Several elements are named after people. Many of the pioneers of nuclear physics and chemistry feature in the list of heavy, radioactive elements discovered since the mid-twentieth century: Ernest Rutherford, Marie Curie, Enrico Fermi, Niels Bohr.

But only two elements have been named after living people. One is element 99, einsteinium. The other is element 106, called seaborgium in honour of the American chemist Glenn Seaborg. 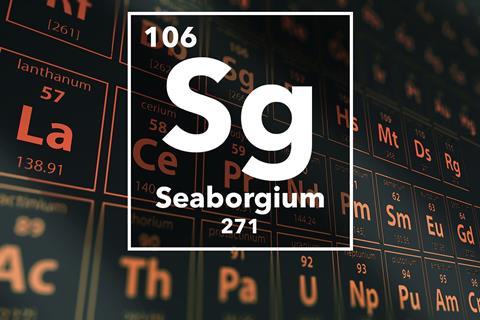 Seaborg's career spans from the age when scientists were only just beginning to understand what atoms are made of, to the quarks and gluons, superstrings and supercolliders of today. He was one of the select band of scientists who first glimpsed the awesome energies that lurked inside the atomic nucleus, which could be released slowly and controllably to power entire cities, or quickly to destroy them.

When Seaborg began his scientific career at the University of California at Berkeley in 1930s, the periodic table of elements was thought to stop at element 92, uranium. Scientists had discovered that elements could be transmuted in a kind of modern alchemy by firing subatomic particles at them in particle accelerators. Some particles might stick; others might break the nucleus into fragments. Either way, the number of protons in the target nucleus could change, making it a different element.

Enrico Fermi was the first to realise that this could offer a way to make new elements heavier than uranium. Such an element, neptunium or element 93, was identified in 1940, and in that same year Seaborg was one of a team at Berkeley that created the next in line: plutonium, element 94. The challenge was to separate the tiny quantities of these new, artificial elements from the rest of the debris, and Seaborg pioneered chemical methods for doing this.

In 1944 Seaborg and his colleagues added elements 95 and 96 to the list, and, after the Second World War, elements 97 and 98. It began to seem that there was no end to the new elements one could make in atom-crashing experiments. 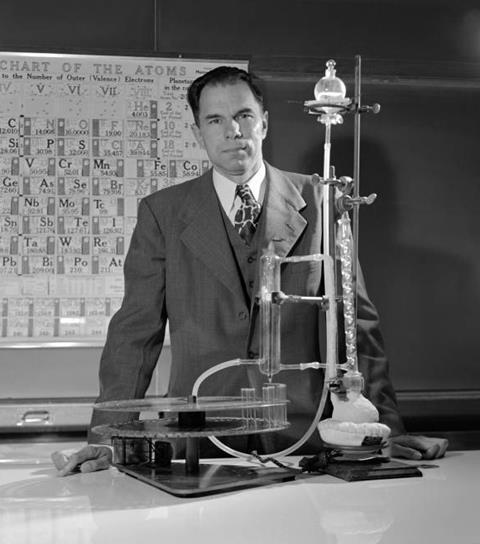 But Seaborg wanted to know what they were like chemically. To judge from where they seemed to sit in the periodic table, the elements after number 89, actinium, should behave like transition metals. But Seaborg found that they didn't really do that, and in 1945 he suggested that they formed an entirely new series which he called the actinides. Several of his colleagues were scepticial, but he was right.

Seaborg's skill in developing essential chemical separation methods for these super-heavy human-made elements, along with the chemical intuition that allowed him to rewrite the periodic table, made him an obvious candidate for honouring with the name of a new element. That opportunity came when the Berkeley radiochemists established their priority to element 106. They had made it back in 1974 by firing oxygen ions at element 98, californium. But a Russian team claimed to have made it earlier that same year. It was not until 1993 that the International Union of Pure and Applied Chemistry (IUPAC) decided that the Berkeley claim was stronger.

And so they got to name element 106, and proposed to call it seaborgium. But you can't do that, IUPAC said, because it is simply not done to name elements after living people. Don't be absurd, replied the American Chemical Society, which insisted that as far as it was concerned, element 106 was now seaborgium. In the face of such determination, IUPAC was forced to relent, and seaborgium went into periodic tables on the walls of chemistry labs worldwide.

And what's it like? In a marvellous experiment in 1997, an international team did Seaborg's legacy proud by finding out what kind of chemical compounds seaborgium forms. The two isotopes they studied decay radioactively with a half-life of no more than half a minute. And the nuclear collisions used to make them created only about one atom per hour. Yet, with just seven fleeting atoms of seaborgium to work with, the researchers figured out that it is a metal comparable to molybdenum and tungsten. In such virtuoso experiments we can see the periodic table continuing to exert its pattern even among the elements that nature never glimpsed.

Phil Ball on seaborgium, the cheeky element that broke with tradition and dared to call itself after someone that wasn't dead. Next week we'll be finding out why a balloon bobbing on a string can reduce a chemist to tears.

We are all familiar with the lighter-than-air gas helium, but whenever I see a balloon floating on a string, I feel a little sad.   It's not because I'm a miserable old so-and-so – it's just because, unlike the happy child on the other end of the string, I am aware of the valuable resource that's about to be lost forever.

And Peter Wothers will be bringing us down to earth with the story of helium, next time. I do hope you can join us. I'm Chris Smith, thank you for listening and goodbye.