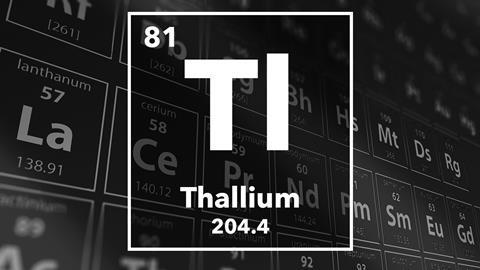 'The poisoner's poison', immortalised by Agatha Christie in The pale horse

Hello, this week's element sees us immersed in a murder mystery. Henry Nicholls:

During world war one, Agatha Christie worked in a hospital and then a pharmacy, an experience that could explain the presence of poisons in many of her plots. In The pale horse, a thriller published in 1961, the star of the show was thallium, also known as 'the poisoner's poison' because many salts of this soft, silvery metal are soluble in water, producing a colourless, odourless and tasteless liquid with a delayed effect on the victim. Here's an excerpt from the dramatic climax in which the novel's narrator Mark Easterbrook solves the mystery of several unexplained deaths.

'I slammed back the receiver, then took it off again. I dialed a number and was lucky enough this time to get Lejeune straight away.
"Listen," I said, "is Ginger's hair coming out by the roots in handfuls?"
"Well - as a matter of fact I believe it is. High fever, I suppose."
"Fever my foot," I said. "What Ginger's suffering from, what they've all suffered from, is thallium poisoning. Please God, may we be in time..."' 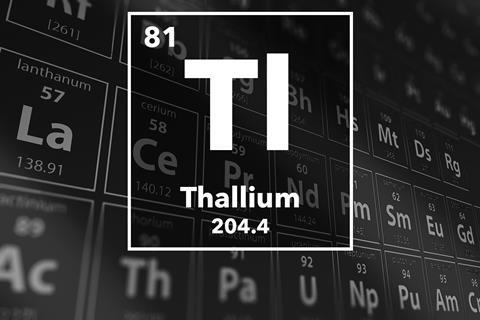 Christie may have got the idea for her plot a few years' earlier in 1957, when the KGB attempted to assassinate Nikolai Khokhlov, a former KGB assassin himself who had defected to the United States. In turn Christie's dramatic and detailed description of the symptoms of thallium poisoning in The pale horse is thought to have saved at least two lives and led to the arrest and conviction of a British factory worker who had used thallium to kill his stepmother, two work colleagues and nauseate around 70 others. It is so dangerous because thallium has similar biological properties to potassium ions, hijacking the ubiquitous sodium/potassium membrane pump to smuggle itself into cells throughout the body interfering with the important roles played by potassium. 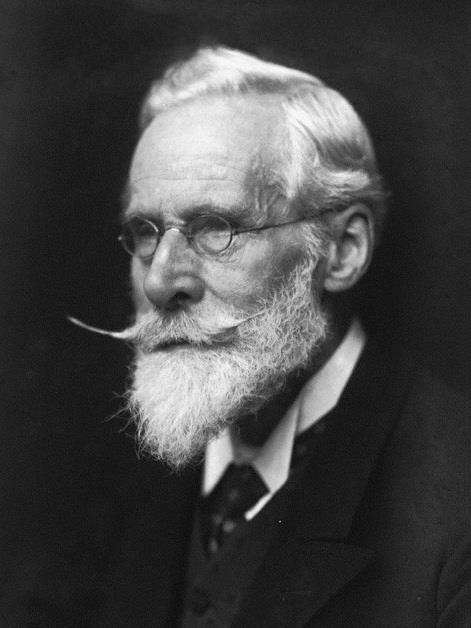 Thallium is pretty abundant in the Earth's crust, found in several selenium-containing minerals. Indeed, it was whilst cooking up one such compound in 1861 that British chemist William Crookes noted that 'suddenly a bright green line flashed into view and quickly disappeared.' He knew he was onto a new element and called it thallium after the Greek for green shoot or twig – thallos. The following year, he succeeded in isolating small quantities of the element, but nowhere near the quantities obtained by French chemist Claude-Auguste Lamy who was working away independently with a greater bulk of raw material. When, in 1862, Lamy was awarded a medal at the International Exhibition in London 'for the discovery of a new and abundant source of thallium', Crookes had a fit and it was only with his election to the Royal Society in 1863 – largely on the back of his thallium work – that the cross-channel spat for priority died down. Subsequent work on the chemistry of thallium showed it to have similar properties to several other elements, including silver, mercury and lead. So much so that French chemist Jean-Baptiste Dumas later dubbed it the 'ornithorhyncus, or duck-billed platypus of the metals.' 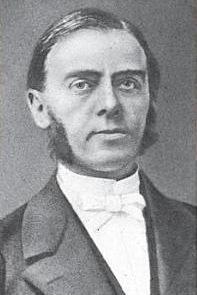 The raw material on which both Crookes and Lamy worked came from waste products deposited during the manufacture of sulphuric acid. The commercial production of thallium today is not dissimilar, with the metal mostly recovered as a by-product of smelting iron, zinc or lead sulphides to make sulphur dioxide. The resulting thallium contains the two naturally occurring stable isotopes, with around 30% of it made up of atomic mass 203 and the remaining 70% comprised of atomic mass 205.

Owing to its toxic properties, thallium has been used as a rodenticide, though there are safer ways to kill rats and the use of this chemical in the environment is now banned in many countries. Today, thallium is of greatest use to the electronics industry. In particular, the conductivity of thallium sulphide alters on exposure to infrared light, making it an important compound in photocells. Thallium bromide-iodide crystals have also been used in infrared detectors. The addition of metals like thallium to glass can also reduce its melting point to as low as 150 degrees centigrade. As such low-melting point glasses do not shatter like normal glasses, they are particularly useful for the manufacture of electronic parts. Thallium is also being tested in high-temperature ceramic superconductors. 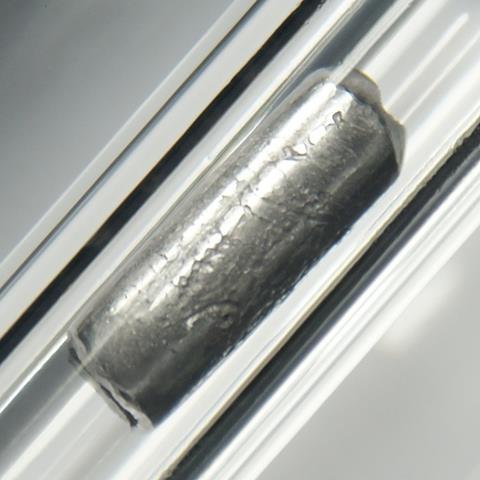 Alongside the two stable isotopes, there are a further 23 radioisotopes, though most of them with fleeting half lives. One of them, thallium 201, is useful in nuclear medicine. Its injected into the bloodstream and will find its way into all tissues with the help of the sodium/potassium membrane pump. This can then reveal to the clinician any part of the body not bathed in blood or where the membrane transporter is not working properly. In particular, it is used to image the blood flow to heart muscle in patients suspected of coronary artery disease. Thankfully, with a suitably short half-life of just 72.5 hours, Thallium 201 disappears from the body long before it can cause the lethal damage of the more stable isotopes.

In The pale horse, Agatha Christie was not as explicit about the treatment for thallium poisoning as she was about its symptoms. 'Do they know how to treat thallium poisoning?' asks the narrator Mark Easterbrook when he reaches the hospital where the hair-shedding Ginger has been taken. 'You don't often get a case of it,' the investigating officer Inspector Lejeune tells him. 'But everything possible will be tried.' It was, and for those who like their happy endings you'll be pleased to know that Ginger makes a full recovery from the thallium poisoning that had stricken her down.

That's a relief, she was OK, although you've totally blown the ending Henry! That was science writer Henry Nicholls with the story of Thallium. Next time, to the element that suits someone who doesn't want to blow up the world, maybe just a small bit of it.

When it comes to practical uses, this silvery substance is an excellent neutron emitter. This makes it handy for kick-starting nuclear reactors, where a high neutron flow is required to get the chain reaction going. It also means that, in principle, californium would make effective small scale nuclear weapons, requiring as little as five kilograms of californium-251 to achieve critical mass – about half the amount of plutonium required for a bomb.

That's the story of californium, which apart from its use potentially as a nuclear weapon is also useful for finding gold and striking oil. And you can join us on next week's Chemistry in its element to find out how. I'm Chris Smith, thank you for listening and goodbye!