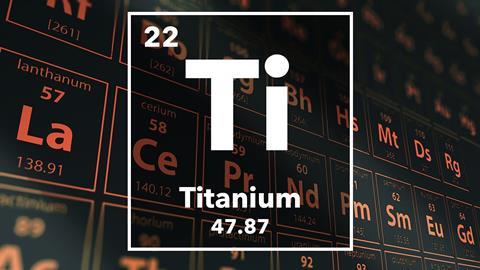 This week, you may be surprised to learn just how reliant you are on this widely used element that cleans and protects our environment.

Titanium. It is notoriously hard to make, but we have come to rely on it and indeed we couldn't do without this element or its compounds today.

So, why is it so important? The most important compound is the oxide TiO2, which makes up 95% of the Ti used worldwide. We actually use 4 million tons of TiO2 each year, a lot of it for paint and other applications that need something that is bright white, insoluble and not toxic, like medicines and toothpaste. In the food industry it is additive number E171, used to whiten things like confectionary, cheeses, icings and toppings. 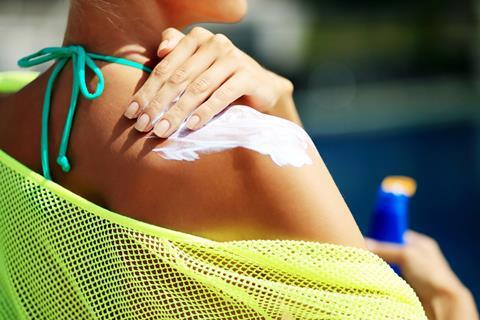 It is also used in sunscreens, since it is a very opaque white and also very good at absorbing UV light. The ability to absorb UV light helps the TiO2 to act as a photocatalyst. This means that when UV light falls upon it, it generates free electrons that react with molecules on the surface, forming very reactive organic free radicals. Now you don't want these radicals on your skin, so the TiO2 used in sunscreens is coated with a protective layer of silica or alumina.

In other situations, these radicals can be a good thing, as they can kill bacteria. Scientists have found that if you introduce small amounts of different elements like nitrogen or silver into the TiO2, UV light is not needed as visible light will do the same job. You can put very thin coatings of TiO2 onto glass (or other substances like tiles); these are being tested in hospitals, as a way of reducing infections. 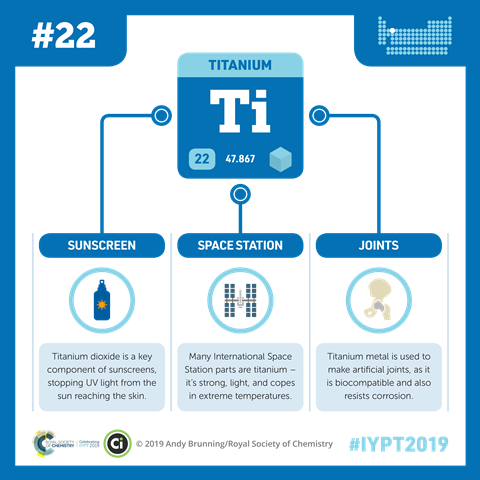 When water gets onto this type of glass, it spreads out, so that it doesn't fog up (think car wing mirrors) and also washes away dirt. This is the basis of Pilkington's ActivT self-cleaning glass, a great British invention. Scientists are now investigating building TiO2 into the surfaces of buildings, pavements and roads, with the aim of getting rid of chewing gum and even dog mess. They are also testing road surfaces with a layer of TiO2 in it, as they think it could remove air pollutants from car exhausts.

The first titanium compound was identified by a Cornish vicar named William Gregor in 1791, when he extracted the impure oxide. He dissolved it in acid and got a colourless solution, but found that it could be reduced by zinc to make a purple solution. He was a transition metal chemist ahead of his time. Lots of chemists tried – for over a hundred years – to get the pure metal. We now know that this is very difficult because even the normally unreactive gas nitrogen reacts with hot titanium metal to form the nitride, TiN. 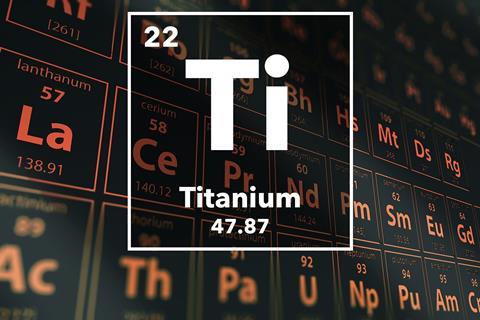 Nowadays titanium is manufactured by the Kroll process. First you heat titanium dioxide with carbon to about 1000 degrees C and pass chlorine over it. This makes TiCl4. People call that 'Tickle'. Then you cover the Tickle with an argon blanket and react with hot magnesium [at 850 degrees C] to get the metallic element.

Titanium metal is not as cheap as iron – because it is more difficult to extract – so its applications tend to be specialist ones. Titanium metal has some very valuable properties. In practice, it is pretty unreactive because, like aluminium, it forms a thin protective layer of the oxide, so it doesn't corrode. Its density is 4.5 grams per cm3, much less than iron, so titanium alloys are important in the aerospace industry. It was used to make much of the SR-71 Blackbird, the world's fastest manned aircraft, as well as a major parts of the engines and airframe of the big passenger aircraft including 747s and Airbuses.

This metal is resistant to seawater so it finds marine applications like propeller shafts, and the Russians are said to have used it to construct submarines. Titanium isn't toxic, and it is not rejected by the body. It also connects with bone, so it has found surgical applications such as in joint replacements – especially hip joints – and tooth implants. So there are lots of applications for titanium and its compounds – we just can't do without it.

Indeed we can't, seeing as it's in our food, sunscreen and windows, and soon may even be in our hospitals and on our roads. That was Simon Cotton from Uppingham School with the diverse uses and chemistry of titanium. Now next week, a sparkling element that makes otherwise plain minerals into precious stones.

Of all chromium's natural occurrences, my favourites are gemstones, where a trace of the element adds a blaze of colour. As corundum, beryl, and crysoberyl, these metal oxides are colourless and obscure minerals. But add a dash of chromium, and they become ruby, emerald and alexandrite. In ruby – which is aluminium oxide with a few parts per thousand of the aluminium ions are replaced by chromium(III) ions – the chromium atoms are surrounded by six oxygen atoms. This leads to the chromium atoms strongly absorbing light in the violet and yellow-green regions. We see this as mainly red with some blue, giving, in the best cases, the characteristic pigeon-blood colour of the finest rubies.

Christopher Blanford explains the sparkling and colourful chemistry of chromium in next week's Chemistry in its element. Until then I'm Meera Senthilingam from thenakedscientists.com and thank you for listening.