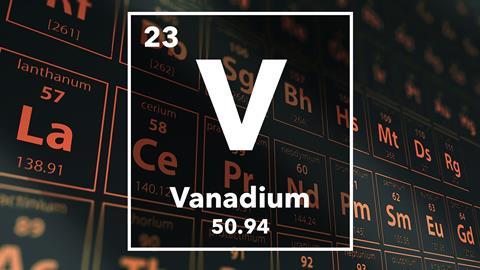 Any colour you like, as long as it's black. Or red, blue, green, yellow...

Hello, this week to an element with a role in body building and that's not just of the human kind. This is the stuff that was essential in helping to get the Model T Fords to first roll off of the production line because it strengthens steel. It's also the catalytic power behind the production of sulphuric acid and its named after the Norse god of beauty, love and fertility. And to reveal her identify here's Chris Orvig.

Vanadium, a first row transition metal in the periodic table, is an element of mystery. Not only was it first transported two hundred years ago from Mexico, and lost in a shipwreck along with all of the relevant lab notes by the great German scientist Baron von Humboldt, but it required discovery several times by such famous names as Wöhler, Berzelius and del Rio (who was actually talked out of his claim in 1805). Final and convincing verification came from the Swede Nils Sefström out of an oxide in iron ores in 1831. 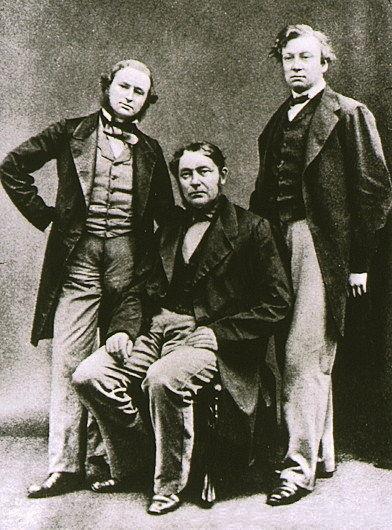 Vanadium metal was first prepared in the 1860s by English chemist Henry Enfield Roscoe. The place of vanadium as a trace element necessary for life processes has been just as tortuously argued and hotly debated through most of the last century – doubtless many organisms and other mammals require it. But do humans? A deficiency condition in humans has never been defined, but vanadium does have a medicinally relevant role as a potential treatment for diabetes mellitus, but more on this later.

Vanadium is the fifth most abundant transition metal in the Earth's crust, often found with titanium and iron in their ores, and significant concentrations are found in certain coal and oil deposits, such as crude and shale oils. In its metallic state, it strengthens stainless steel and some superconducting alloys, while in its numerous ionic states it has been used spectroscopically to probe enzyme active sites and is found in both naturally occurring catalysts in seaweed and lab catalysts for oxidation chemistry. Silver vanadium oxides have a role in battery chemistry. The first large scale industrial use of vanadium metal was a century ago in the steels used to fashion the chassis of the Ford Model T car, and steel remains the main use of vanadium metal. Because vanadium is a light transition metal, not a heavy metal as often incorrectly claimed in the toxicology literature, vanadium metal contributes reduced weight to high tensile strength steels. The compound of greatest commercial importance is vanadium pentoxide, V2O5, which is used as a catalyst for the production of sulfuric acid, the bulk commodity chemical of greatest world production. 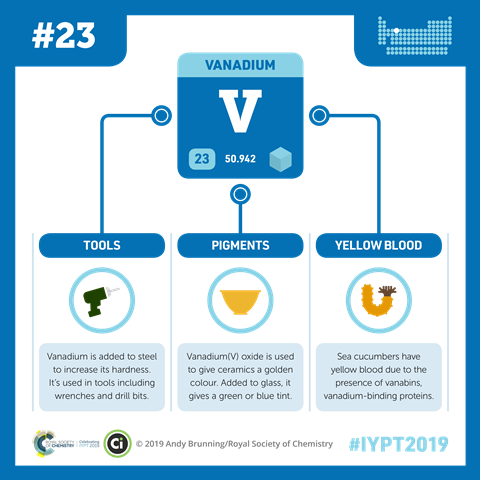 Tremendous versatility for an element named by Sefström for Vanadis (also known as Freyja) the Norse goddess of beauty, love and fertility. All seven oxidation states from -1 to +5 are known in inorganic chemistry, and give rise to the many beautiful colours often associated with transition metal compounds. Its multiple oxidation states, ready hydrolysis and polymerisation bestow upon vanadium a chemistry far richer and more complex than that of many elements, formation of aggregated oxyanions and sulfur complexes being just two examples. The highest three oxidation states (III, IV and V) are of significant importance in water and are the oxidation states found in the more than one hundred known vanadium minerals. The tar sands of Alberta in western Canada present a huge untapped reservoir of vanadium. 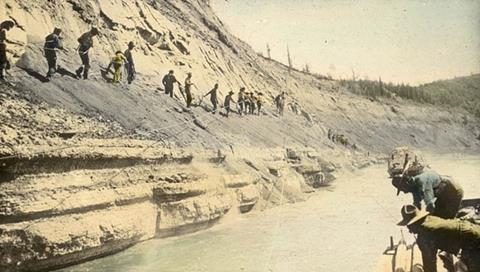 Certain marine ascidians and sea squirts concentrate vanadium up to one million fold from surrounding seawater, while mushroom species such as amanita muscaria concentrate vanadium(IV); in both cases the reasons have yet to be elucidated. Biology exploits vanadium's oxidation state promiscuity in the vanadium-dependent haloperoxidases, which were discovered in marine brown algae and seaweed in the 1980s; these are surprisingly robust marine enzymes that oxidise substrates using peroxide as an electron acceptor. There is even a vanadium nitrogenase – a vanadium nitrogen-reducing alternative to the iron-molybdenum enzyme that reduces dinitrogen to ammonia in the root-nodules of many plants. 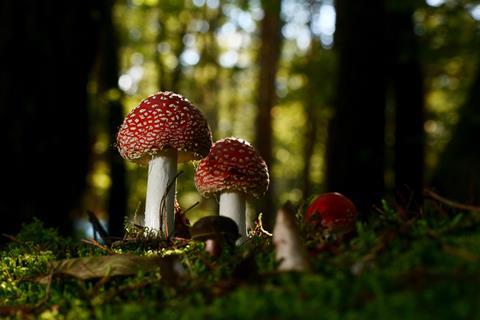 Most conveniently for studies of vanadium(V) chemistry (that which is important in oxidation catalysis), naturally occurring vanadium is mono-isotopic – vanadium-51 has a nuclear spin of 7/2 which is useful for NMR spectroscopy. Vanadium(IV) has one unpaired 3d electron that, coupled with the nuclear spin, is exquisitely diagnostic in EPR spectroscopy – the vanadyl ion (VO2+) is a sensitive spectroscopic probe that has been used to elucidate enzyme active site structure, as well as catalytic activity. 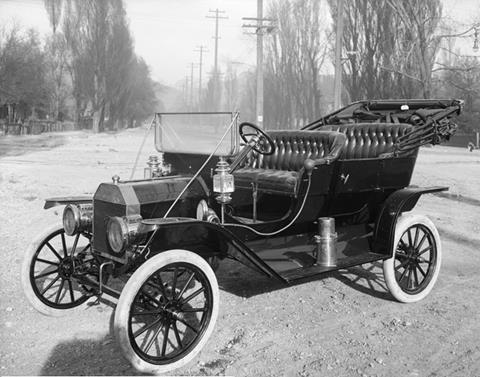 Vanadium has significant effects on cellular growth, redox and signaling processes, as well as enzyme function. Vanadyl sulphate is a very controversial dietary supplement, popular in body-building and can often be purchased in gym shops where allowed by law. The vanadate anion is a phosphate mimic that has been used as a probe of the enzymes that transfer phosphates in cell signaling – the phosphatases and kinases. Not surprisingly vanadium shows many interesting biological properties resulting from this activity, not the least of which is its ability to enhance, but not mimic, the action of insulin, the key hormone in diabetes mellitus. This property was first shown in France in three diabetic humans and published in 1899 in La Presse Médicale. Vanadium does not act in the complete absence of insulin – hence it is an enhancer rather than a mimic of insulin. Significant efforts over the last 25 years, since John McNeill of the University of British Columbia showed that vanadate was effective in a diabetic rat model, have led to a number of vanadium compounds now being clinically investigated in humans as potential agents for the treatment of diabetes.

A colourful transition metal with a sweet side. That was chemist Chris Orvig and he's based at the University of British Columbia. Next week you'll have to be sure to hold your nose.

Butyl seleno mercaptan is the essential ingredient of skunk smell, and is certainly a contender for the title of the worst smelling compound. Once you have smelt it you will never forget it, nor underestimate the impact that this interesting element can have.

Yuk, but thankfully you can catch up with the whole story of selenium and without having to have an unforgettable encounter with a skunk and that's all on next week's Chemistry in its element. I'm Chris Smith, thank you for listening and goodbye.