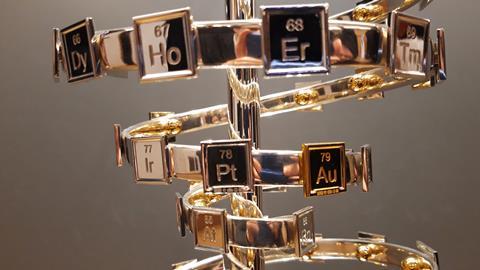 Ten periodic tables you really should know about

150 years ago, the periodic table was just a few ordered lists of element symbols and atomic masses hastily scribbled by Dmitry Mendeleev on the back of an invitation to a cheese factory. It is fair to say it’s come a long way since then, evolving through countless tweaks, revisions and updates into a thing of beauty that is instantly recognisable to scientists and non-scientists alike.

It would be impossible to count all the times it has been reimagined and recreated over the years. But what better time than the International Year of the Periodic Table (IYPT) to look at some of the most notable examples? Here are a few that have caught our eye.

At the University of Murcia in Spain, the chemistry faculty building is decorated with 118 75×75cm metal element squares making up a 150m2 periodic table, thought to be the biggest permanent one in existence (although we have heard a rumour another chemistry department is planning an even bigger one so watch out for that). It’s true there have been bigger periodic tables made on sports pitches or glass-fronted buildings for world record attempts, but these don’t tend to stick around. At Murcia, the panels holding the elements are designed to stay in place for many years to come. 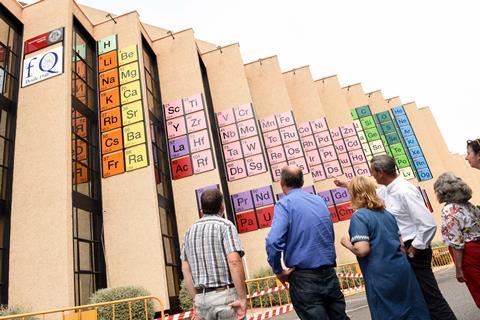 This periodic table – etched onto a silicon chip using electron beam lithography – is the smallest ever made, measuring just 14µm by 7µm. The lines used to write the element symbols are just 30nm thick – about the size of a virus. It was drawn earlier this year by researchers at the University of Nottingham in the UK, who also held the previous record for the smallest periodic table with a 90µm by 46µm version engraved on a hair from the famous head of chemist and YouTube icon Martyn Poliakoff. Their latest creation sits between two miniature portraits – one of the periodic table’s father Dmitry Mendeleev and the other of Yuri Oganessian, the only still living person to have an element named after them. 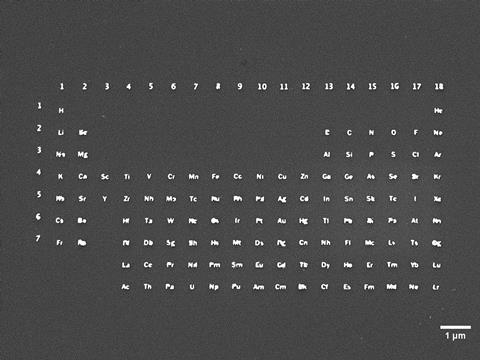 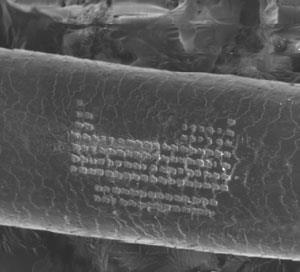 When chemists at the University of St Andrews in the UK were clearing out a storage area beneath one of the lecture theatres they struck upon buried periodic table treasure, uncovering a wall chart that dates back to the 1880s. It is believed to be the oldest surviving periodic table used for teaching, and is now proudly displayed in the university’s school of chemistry. 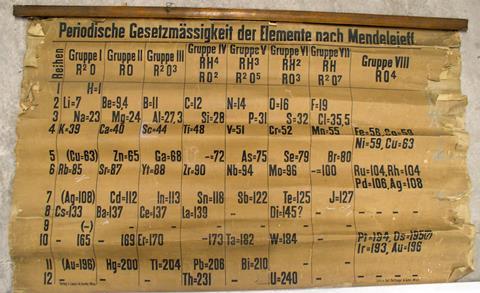 It’s arguably the best way to serve cupcakes. The tasty periodic table pictured was made for the Royal Society of Chemistry on the launch day of IYPT. But it’s not the only edible – or indeed cupcake – version of the chart. The earliest recorded example of a periodic table of cupcakes was made in the early 20th century by Ida Freund, the first woman to become a chemistry lecturer in the UK. Unfortunately no picture exists of her periodic table showstopper. 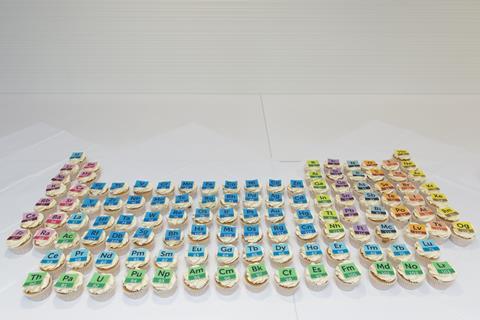 The Royal Society of Chemistry’s periodic table of cupcakes

There are countless crafty and artistic depictions of the periodic table, but we’re willing to bet this was possibly one of the most fiddly and time consuming to construct. It was handmade by Jane Stewart, a biochemistry graduate who spent 350 hours tying coloured threads into 200,000 tiny knots to celebrate 150 years of the periodic table. The finished work will be displayed at a number of UK university chemistry departments this year as part of their IYPT celebrations. Your fingers will ache just looking at it.

Honorary mentions to all the knitted, embroidered and crocheted periodic tables of the world. They must have taken ages too. 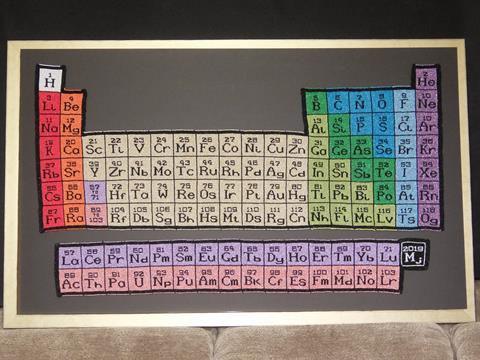 This macramé periodic table is made up of 200,000 knots

6. The most expensive periodic table in the world (probably)

This sculpture was commissioned by the University of Cambridge to celebrate the IYPT and was made by Padgham and Putland silversmiths. It’s made of a ribbon of solid silver bearing silver element tiles, although the tiles for gold, platinum and palladium are made from the precious metals they represent, and there is a diamond on the carbon tile.

It’s not a traditional periodic table – rather than Mendeleev’s chart, they’ve arranged the elements in the spiral form designed by Georges Schaltenbrand in 1920, with spirals of different diameters representing the s, p, d and f blocks. The sculpture has also been signed by element discoverer Yuri Oganessian, and can currently be admired at St Catharine’s college’s periodic table exhibition. 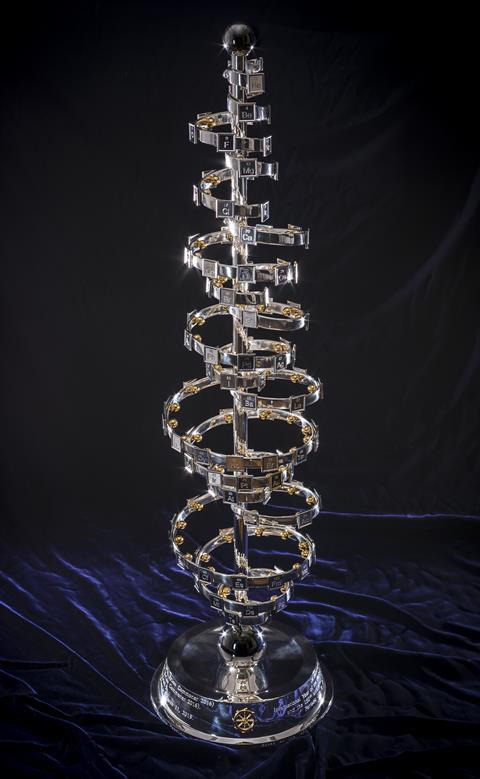 This design by Nagayasu Nawa is another reimagining of the traditional rows-and-columns periodic table. The circular arrangement of elements, he reasons, makes it straightforward to work out the atomic number of a given symbol, as we’re already comfortable with the 60 1-minute divisions on a clock face. The symbols can be colour coded to categorise them, and a spiral at the centre of the clock shows the elements’ electron configurations. 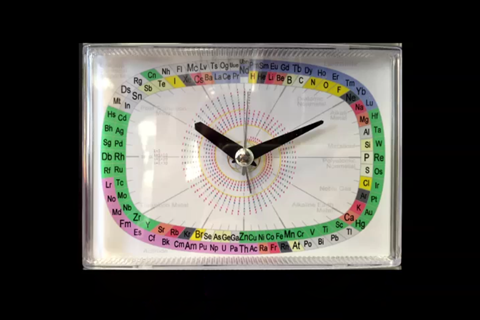 Theo Gray was quite possibly the first person to make a periodic table that was an actual table that held many of the chemical elements, back in 2002. Gray made the wooden table by hand, using an engraving machine to carve the element symbols into tiles. Different groups of elements, such as alkali metals and noble gases, are represented in different woods, and each element tile has a box beneath it with space for a sample, making it the perfect place for Gray to store his collection of elements. His efforts earned him an Ig Nobel prize in 2002. 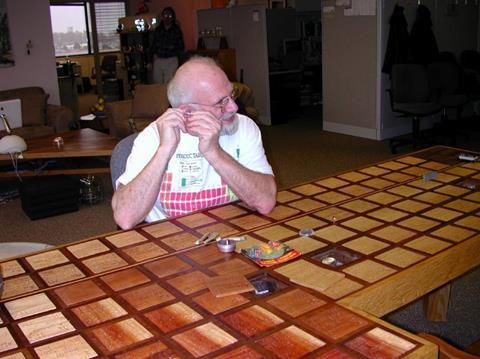 9. The periodic table of endangered elements

It may not be the most beautiful redesigns, but EuCheMS’s ‘element scarcity’ periodic table caused a splash when it was unveiled last year. The area occupied by each of the 90 naturally occurring elements indicates their abundance in the Earth’s crust and atmosphere. The elements that are needed for the electronic components of mobile phones – such as such as indium, arsenic and silver – are highlighted. 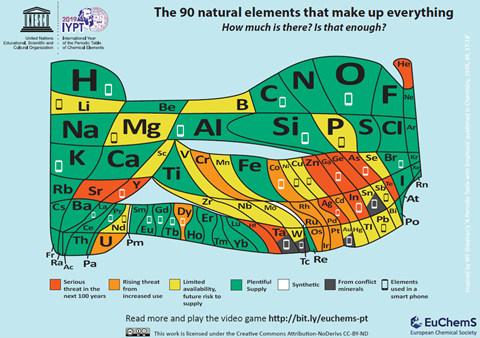 The invitation to a cheese factory on which Mendeleev first jotted down ordered rows of element symbols – arguably the very first periodic table – still exists. Known as the cheese factory document, it’s kept in the archive at the Mendeleev Museum at St Petersburg State University in Russia. Though it’s hardly recognisable when put side-by-side with today’s periodic tables, it represents an idea that has gone on to shape the whole of chemistry. 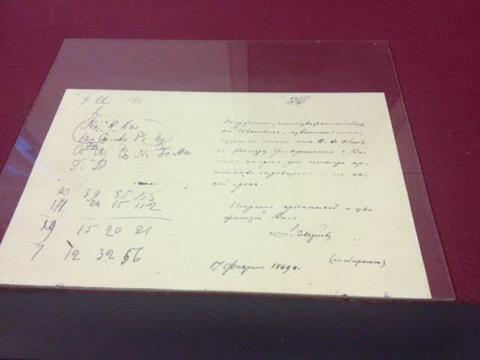 Unbelieveably, Dmitri Mendeleev’s idea for his periodic table was noted down on an invite to a cheese factory and the original scribblings can still be seen in a museum in St Petersburg

Correction: The caption on the conference table image was changed on 23 April 2019 as it is Oliver Sacks not Theodore Gray pictured