In the spring of 1900, a young English chemist was struggling to get his foot on the bottom rung of the academic ladder. Since gaining his first-class honours degree, Frederick Soddy had received no worthwhile job offers. Hearing that the chemistry professor at the University of Toronto was retiring, he applied for the chair, and sailed to Canada to present his case in person, without success. However, a speculative visit to Montreal gained him the humbler post of laboratory demonstrator at McGill University.

Shortly afterwards Soddy began his historic collaboration with McGill’s junior physics professor, Ernest Rutherford. Their research on radioactivity soon shook the foundations of chemistry, by demonstrating that one element could change into another. Soddy went on to make further important discoveries, win a Nobel prize, and put a new word - isotope - into the dictionary. 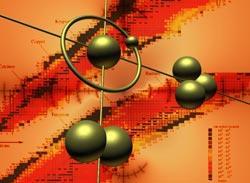 Soddy put the word ’isotope’ in the dictionary

Soddy was born on 2 September 1877, the youngest child of a London corn merchant living in semi-retirement on the Sussex coast. Eighteen months after his birth, Frederick’s mother died. Brought up mainly by his half-sister Lydia, he was a shy child who had difficulty relating to other people. This diffidence, together with an acute sensitivity to real (and imagined) attacks, was to cause Frederick problems throughout his life. At school in Eastbourne he disliked the team sports which dominated the boys’ social world, preferring solitary two-mile swims in the sea. Thomas Huxley’s books inclined him towards the sciences, and the teaching of Robert Hughes, a young Oxford graduate, inspired him to choose a career in chemistry.

Soddy’s first research paper, co-authored with Hughes, appeared in Chemical News in 1894. In January 1896, a term late because he had to retake the Latin entrance exam, Soddy began studying at Oxford. In 1898 his brilliant performance in finals impressed the external examiner, William Ramsay. However, his Oxford superiors did not offer Soddy the college fellowship he might reasonably have expected after this result. He stayed on another year, working at organic syntheses in an improvised basement laboratory and hoping something would turn up. Then Canada beckoned, and his career took off.

Soddy’s research with Rutherford grew out of a formal debate at McGill’s physics society in March 1901. Rutherford proposed that the energy emitted by radioactive elements came from the break-up of atoms. Soddy’s polished rhetoric and caustic wit convinced the audience that there was insufficient evidence for this. Rutherford found the collision upsetting, but a few months later the two men were co-operating to resolve the question experimentally. Radioactivity was then a very new topic.

Five years previously, Henri Becquerel had announced that something emitted by a uranium-bearing mineral left traces on wrapped photographic plates. Others, including Rutherford, and Marie and Pierre Curie, quickly joined the hunt. By 1901 several radioactive minerals were known, and rays of three kinds - alpha, beta and gamma - had been identified, though their origin remained mysterious.

Some physicists argued that previously absorbed energy was being re-emitted, as happens in fluorescent substances. Yet mineral samples which had long been in darkness still radiated, apparently defying the law of conservation of energy. Meanwhile, some of the new radioactive elements did not seem to fit anywhere in the periodic table. By the time Soddy left Canada in 1903, he and Rutherford had made significant progress towards solving these puzzles.

They showed that radioactive thorium released a gas, itself highly radioactive, which they called ’emanation’ (later renamed radon). Its refusal to combine with standard reagents indicated that it belonged to the same family as argon (discovered by Ramsay in 1894). Soddy and Rutherford also detected a new solid radioactive element, which they called thorium-X (later identified as radium). After the emanation and thorium-X were removed, the remaining thorium was still radioactive, and soon fresh emanation and more thorium-X appeared. It seemed thorium was continually giving birth to these two new elements as it emitted radiation.

Eventually, the emanation generated yet another new substance - a radioactive deposit on the walls of the containing vessel. Years later, Soddy recalled the moment when he exclaimed ’Rutherford, this is transmutation!’ The reply came back ’For Mike’s sake Soddy, don’t call it transmutation. They’ll have our heads off as alchemists.’ Nevertheless, their experiments convinced all but a few die-hards that transmutation was happening. In several classic papers they tracked the sequence of radioactive decay, adopting the term ’half-life’ for the period during which 50 per cent of any elementary sample was transformed into its daughter products.

In the spring of 1903 Soddy joined forces with Ramsay - by then Sir William - at University College London. Using the spectroscope, they proved that radioactive decay also generated helium gas. (Rutherford had already predicted this, because alpha particles had approximately the same mass as helium atoms).

However, finding Ramsay a difficult colleague and London an uncongenial workplace, Soddy moved on. In 1904 he became a lecturer at Glasgow University, with a lab of his own and several post-graduate students to support his research. While seeking homes in the periodic table for new radioactive elements, he acquired a more settled home himself, marrying Winifred Beilby in 1908. Her father was a scientific industrialist, and a generous benefactor of Glasgow University. Her mother was a feminist intellectual, at the centre of a lively social and cultural network into which Soddy was welcomed. Winifred and Frederick both loved mountains, and enjoyed hill-walking and skiing together. Neither of them feared championing controversial causes, and he soon joined her in campaigning for women’s rights.

While the suffragettes battled to make the electoral system more sensible, chemists struggled to make sense of the radioactive elements. The new elements usually had short half-lives, and were available only in tiny quantities, so establishing their chemical properties proved difficult.

By 1910 Soddy had identified several anomalous groups of elementary substances - groups whose members had different radioactive characteristics but were chemically indistinguishable. He boldly declared that each group was a cluster of variant forms of a single element, which should therefore be located at a single point in the periodic table. At a dinner-party with the Beilbys in 1913, Margaret Todd suggested the name ’isotope’ for these entities. (In classical Greek, iso means ’the same’, and topos is ’place’.) Soddy immediately adopted and publicised the new word.

Others challenged the concept, but it was eventually vindicated by the ultra-precise atomic weight measurements of Theodore Richards and his co-workers at Harvard University, US. Lead is the final product of the radioactive decay of uranium, thorium and radium, but atomic weights of lead samples from these sources differed from that of lead extracted from non-radioactive ores. After 1919, as Francis Aston developed the technique of mass spectrometry, many other elements were found to exist in multiple isotopic forms.

Searching for a general law

Meanwhile, the search continued for a general law of radioactive decay. In 1911, Soddy asserted that when an atom of a radioactive element emitted an alpha-particle, its daughter element was located two places to the left in the periodic table. In 1912, Kasimir Fajans and Alexander Russell independently proposed that the emission of a beta-particle (an electron) produced a new element one place to the right in the table. Soddy combined these rules with his concept of the isotope to create a general ’displacement law’ early in 1913.

Fajans had already reached similar conclusions, but he thought the emitted beta-particles were outer valence electrons. Soddy correctly stated that they were expelled from the atomic nucleus. The planetary model of the atom - a small, dense core encircled by a tenuous cloud of electrons - had been endorsed by Rutherford in 1911. It was supported by experiments on the scattering of alpha-particles done by Hans Geiger and Ernest Marsden under Rutherford’s supervision. Like Rutherford, Soddy believed that the atomic nucleus was the source of radioactive energy. He was probably the first to appreciate what might happen if humanity gained control of that energy.

Glasgow has a long tradition of evening classes for working people. As Soddy’s political views moved leftwards, he became involved in adult education, and in 1909 gave some lectures on radio-chemistry that were published as The interpretation of radium. He suggested that nuclear energy might one day provide abundant, cheap, clean power, ending pollution and poverty for ever. He also warned that its uncontrolled release could produce terrible destruction.

Soddy’s book inspired HG Wells to write The world set free - a futuristic novel that concludes with the earth devastated by nuclear explosions and radioactive debris. It was published in 1914, and dedicated to Soddy. Later that year, Soddy became professor of chemistry at Aberdeen. The impact of war on the university, and his involvement with social and political issues, reduced his research output, but he had already achieved enough to earn the 1921 Nobel prize for chemistry for his work on radioactive substances and isotopes.

After accepting an Oxford chair in 1919, Soddy proposed radical changes to the university’s teaching and research procedures. Most were accepted, but only after his term of office ended. The mixture of bluster and benevolence with which Rutherford ran the Cavendish laboratory at Cambridge was quite alien to Soddy, who never understood that simply being in the right was insufficient to push decisions through university committees. When he finally got funds to refurbish the old chemistry lab at Oxford, it was a success, but he never established a research group comparable with Rutherford’s.

Shattered by his wife’s death in 1936, Soddy retired from his Oxford post and thereafter pursued his other interests outside chemistry. His numerous publications on mathematics, engineering, economics and politics were always original and provocative, though specialists in these fields usually dismissed them as unsound or irrelevant.

Soddy was inclined towards socialism by the poverty he witnessed in Glasgow before the first world war, and for some years he supported the Independent Labour Party. However, unlike many European intellectuals, he was not converted to Marxism by the apparent failure of traditional economic policies during the recessions of the 1920s and 1930s. Instead, he developed a novel economic theory from the laws of thermodynamics, arguing that money in the economic world is analogous to energy in the physical world. The Social Credit and New Britain movements were both sympathetic to his ideas, but he made no headway with the mainstream parties, or among academic economists. Nevertheless, his prediction that a single currency would unite Europe in peace and prosperity seems more plausible now than it did in the 1930s.

Still more prescient was Soddy’s warning that the world’s fossil fuels would run out in the near future, after which only nuclear energy could preserve civilisation. This opinion is now widely (though not universally) accepted. However, his conviction that nuclear war would be utterly disastrous for humanity has become part of the conventional wisdom of our time. One of his last public acts was to join 17 other Nobel prize winners in signing an appeal to the world’s leaders to renounce nuclear weapons.

Soddy died on 22 September 1956. He left most of his assets to establish a trust fund to enable teachers and students to visit communities different from their own, at home and abroad. It was a fitting memorial for a man who seldom found it easy to socialise, but who nevertheless believed that greater understanding and fellowship between peoples is essential if the human species is to survive the nuclear age.