Getting the most out of your reactions is a crucial part of green chemistry. The bond-forming prowess of metathesis catalysts can help

Underpinning all organic chemistry, the simple carbon–carbon bond is one of the most stable covalent bonds known. Chemical synthesis relies on the reaction of reagents to form products, with bond breaking being as essential a component as bond formation. The utility and ubiquity of carbon–carbon bonds make them vital to modern life: from industrial and agricultural chemicals, to biological processes and pharmaceutical products. The stability of the carbon–carbon bond makes it essential to life as we know it, but also means that bond breaking is energetically demanding and specific reaction pathways are needed. Many methods of forming carbon–carbon bonds rely on breaking these bonds first, a difficult process for such a stable bond.

But the simple alkane and alkene chains in chemical products are so essential that years of research has been conducted into greener methods of formation. Two of the most obvious for any organic chemist are the Wittig1 or Grignard reactions. However, both of these methods require highly basic conditions that are incompatible with many substrates of interest. In the case of Wittig reactions, every mole of the desired carbon–carbon double bond comes along with an equivalent of triphenylphosphine oxide, which can be problematic to remove on a large scale in addition to being a waste of raw materials. These more traditional approaches are inappropriate for many commercial applications and therefore alternative cleaner methods are needed. In addition, the pressing need to monitor and minimise the environmental impact of any industrial reaction requires the continuous development of new chemistry. This typically involves using greener methods of synthesis with the aim of achieving the simplest and most efficient method of chemical synthesis.

One answer to the question of developing an efficient method of carbon–carbon double bond formation was uncovered over 50 years ago when scientists Robert Grubbs, Yves Chauvin and Richard Schrock began their pioneering research into metal-catalysed reactions. Little did they realise that this would be the start of a journey that would culminate in their combined receipt of the 2005 Nobel prize in chemistry.2 Of course, their famous catalytic reaction in question is known as olefin (or alkene) metathesis. The reaction involves a ruthenium-based metal complex with various substituted ligands. 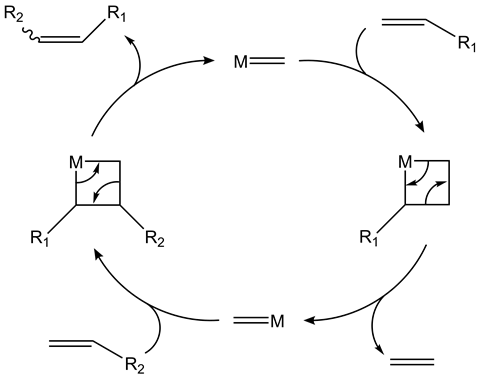 A general scheme for the metathesis reaction

Their combined scientific prowess has advanced chemical research into the commercial realm too. A common desire in industrial chemistry is the creation of useful chemical products from common and cheap reagents. In particular, the formation of carbon–carbon double bonds via olefin metathesis has already been applied to many essential chemistry-enabled industries: from the development of pharmaceuticals, agricultural chemicals, long chained polymers, pheromones or derivatising oleochemicals. The synthetic possibilities are seemingly endless.

The quest for greener chemistry

Catalysis is one of the twelve principles of green chemistry. It replaces stoichiometric activation methods with pathways that lead to reduced waste and often milder conditions. For instance, when two olefin substrates are joined by metathesis, the byproduct is ethene (C2H4). Contrast this to a Wittig olefination where the byproduct is triphenylphosphine oxide and 10 times the mass per mole of waste is generated. Even other catalytic reactions that lead to olefin products such as the Heck reaction rely on the preactivation of one of the substrates, for instance with a halide leaving group. However, this preactivation results in the generation of a halide byproduct in the waste stream. Even in this comparison, olefin metathesis may be the most atom-efficient option, covering another of the twelve green principles: convert as many reactant atoms into product atoms as you can.

Over the years, olefin metathesis has proved to be a useful synthetic tool in improving reaction productivity, reducing the amount of waste while also increasing the yield of the desirable compound; or opening new reaction pathways that were previously considered impossible. Olefin metathesis opens up new possibilities for greener methods of chemical synthesis with the added bonus of highly active catalysts and potentially reduced energy consumption or carbon footprint.

Sometimes synthetic chemistry does not do what you want. Any organic chemist will tell you that when pressed on the viability of chemical reactions. This can be caused by the favoured submission of side reactions, or by the fact that the reaction in question does not lead to the desired product in a high enough yield.

Of course, alternative routes for the reaction can be devised. One such alternative could involve additional steps that approach the problem from a different angle. However, this workaround could prove to be an unnecessary complication that could easily be avoided. Instead, by using olefin metathesis catalysts, new synthetic routes for substrates can potentially be devised. One example is in the synthesis of multi-functional polycyclic lactams which have potential applications in medicinal chemistry. Here, Grubbs’ catalysts have shortened the number of steps by achieving a hindered synthesis in a high-yielding reaction.3

This illustrates just one example of how a complex polycyclic lactam can be synthesised in a single high-yielding two-step process, the second of which involves a ring-closing metathesis reaction. Here, robust metathesis catalysts demonstrate their aptitude for achieving fundamentally difficult reactions on strained and complex reagents. Furthermore, the catalyst used here is versatile, tolerating various functional groups, including tertiary amines. Where previous synthetic methods had relegated the lactam product to a low concentration side-product, ring-closing metathesis now forms it as the major product.

Cross-metathesis reactions, where two unconnected alkenes undergo metathesis, have received a somewhat notorious reputation as uncontrollable reactions. While this was certainly true for the first-generation of metathesis catalysts, modern innovations have overcome this problem by fine-tuning the reaction conditions and ligands. By changing properties such as the steric bulk – the physical space occupied by the ligand – the catalyst complex can influence the reaction pathway directing product formation. Changing such properties also has a strong effect on the yield of a reaction. To illustrate the effect various catalysts have on a given reaction, a series of competitive studies have been performed by US researchers with a variety of metathesis catalysts.4

In this case, the smaller N-heterocyclic carbene ligand directs the reaction down a specific pathway, favouring the formation of the desired product. In addition to improving yields, olefin metathesis can also potentially offer synthetic solutions to those reactions where the stereoselectivity – the precise direction of chemical bonds – must be controlled. Reactions that produce a mixture of compounds require extensive removal techniques, typically involving wasteful quantities of solvent, in addition to reducing the total volume of useful compound synthesised.

Like many catalytic methods, metathesis catalysts can influence the precise stereochemistry of a given reaction. In a manner similar to the previous example, the steric influence of ligands can orientate reagents into specific conformations that dictate precise bond formation. In the case illustrated below, cross metathesis reactions are successfully used to directly synthesising the cis-alkene, commonly considered to be energetically unfavourable compared to a trans-alkene. Products such as these have proved useful for a variety of applications, including in the present case, as precursor molecules for insect sex pheromones that are used to deter insects and protect crops.5

Unfavoured cis-alkenes can now be synthesised with ease

Underpinning both processes are the fundamental properties of the catalyst. By designing and screening various catalysts with a wide variety of different functional ligands, the reaction in question can be influenced to produce a higher yield of the desired chemical product, and unnecessary by-product formation is mitigated.

The environmental impact of the chemical industry has recently received attention across multiple fronts, for example the impact of solvent use on sustainability. Nowadays, industries and institutions must endeavour to ensure that any process is not just cost-effective and efficient, but also environmentally friendly. The examples discussed here illustrate just three cases where metathesis catalysts have been applied in academic research – but industrial applications are also viable. The challenge then lies in creating and optimising a plant-scale level of production in the most productive and sustainable manner.

New catalyst applications are continuously being uncovered by researchers. One example, recently published in Polymer Chemistry, applied Umicore catalysts to facilitate and simplify the previously difficult process of recycling natural rubber, all made possible through the process of metathesis.6 This is a single example of the role that metathesis catalysts can play in driving future research and industrial innovations.

Sustainability and green chemical practices are the pillars that build a brighter tomorrow. At Umicore, these pillars form an integral component of working with commercial and academic collaborators to create a more sustainable world. With a world that is increasingly reliant on the production of chemical materials, any process developer must continuously ask the question: How can we reduce the amount of waste or optimise conditions necessary to conduct our reaction? The answer lies in working collaboratively with the scientists who can provide the expertise in overcoming or avoiding reaction bottlenecks and making any chemical reaction sustainable, be it optimising catalyst loadings to reduce potential waste metals, or investigating potential alternative reaction routes that could be achieved using catalysts such as the Umicore–Grubbs portfolio. Through supplying quality catalysts at the quantity needed for industrial applications, the possibilities are, once again, endless.

The carbon–carbon bond is ubiquitous and universal. Its extensive utility will make it an essential part of chemistry in the years to come, and the metathesis reaction could help bring it here in a greener way.