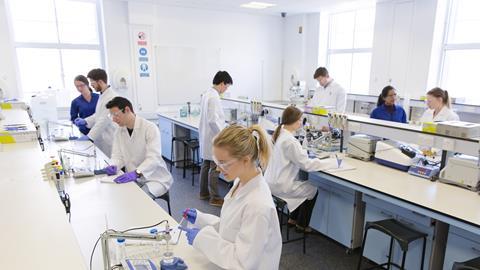 1% of chemicals end up on benches in undergrad labs

Undergraduate chemistry students doing a practical lab at York University spilt around 1% of the volume of chemicals they handled. In the worst cases students spilled 10% of the total volume, although many spilled little according to research by the department’s safety officer. The safety officers also found that simple feedback could substantially improve undergrads’ chemical handling skills.

‘Chemical spillages are known to be an issue but have never been quantified before,’ says Moray Stark, a safety officer in the chemistry department at York. While graduating students have to demonstrate an ability to handle chemicals safely, not spilling them isn’t usually explicitly considered.

Working with two final year students, Stark used absorbent paper liners to create a straightforward way of assessing the amount of chemicals spilt. The researchers also designed feedback that set out the potential implications for students of continuing to be as careless as they were in the first experiment. This took the form of an A–E grading of chemical handling, and one of five statements such as: ‘If you spilled this volume of chemicals routinely then you would not be able to handle even low hazard chemicals safely, such as ethanol.’

First year students carried out a spectroscopy experiment twice that was designed to develop their volumetric handling skills, working with 100cm3 of copper solutions. They were randomly allocated to a control and intervention group. The latter got feedback immediately after the morning’s experiment, while the control group did not. After repeating the experiment in the afternoon, the students who’d received feedback spilled around 50% less.

Chemistry lab demonstrators at the University of Edinburgh say they’re not surprised by the 1.2% spillage rate recorded at York. Edinburgh’s chemistry department tries to minimise chemical wastage by providing dispensers. One demonstrator said she observed that where spillages occur ‘it’s because they [students] haven’t been paying attention to where they’ve placed equipment’.

Isobel Easdale, health and safety manager for Edinburgh’s chemistry school, wants to know if the benefit of feedback is sustained over a semester. Stark hopes to address this question in future.

Michael Wilson, senior science technician at Sunderland College is concerned that secondary schools now provide less practical work so students don’t develop basic lab skills. ‘They don’t do the things they used to do that gives them the physical dexterity skills – especially when it comes to handling things that might make them a bit nervous.’ He adds that ‘some find it difficult to pour liquid into a measuring cylinder at a given volume’. Wilson normally calculates a 50% wastage rate for younger students, to take account of aspirator taps not being fully turned off or burettes being filled with the tap open.