10 August 2005: Behind the scenes at the chocolate factory

The 'chocolate' in the movie Charlie and the Chocolate Factory looks fun to swim in, but isn't as tasty as the real thing and is surprisingly difficult to make.

The ’chocolate’ in this summer’s blockbuster movie Charlie and the Chocolate Factory might look fun to swim in, but is definitely not as tasty as the real thing and is surprisingly difficult to make, according to the chemists who developed it. 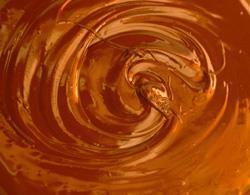 Leeds, UK-based chemical company Vickers were approached by the film-makers to develop a product that looks and flows like liquid chocolate, could be produced in large quantities, and would last long enough for filming. The product had to be non-toxic so that actors could swim in it.

The chocolate river and waterfall seen in the film are real, not a digital creation. A million litres of the mixture was re-circulated to give the impression of a flowing river. The waterfall needed to be thicker so that the flow didn’t break up too early, recall the chemists, which required an additional thickening agent.

The final fake chocolate consisted of less than 1 per cent hydroxyethyl cellulose, around 0.2 per cent organic pigments, and food grade biocide at parts per million levels in a water base.

’Hydroxyethyl cellulose is a gelling agent which causes the water to thicken,’ Vickers’ CEO Julian Driver told Chemistry World. ’We were able to control the viscosity of the final product by varying amounts of this material.’

The liquid was coloured with organic pigments. ’That was a heart-rending activity,’ laughed Driver, ’we’re scientists and they’re artists, so you can imagine what the communications were like!’

The Vickers team went back to the drawing board several times because the final effect of the colour could only be judged under specific lighting and once the liquid had been seen on film. ’A lot of people were very excited about what we thought would be the easiest bit - getting the colour right,’ said Driver.

Stabilisers were added to avoid the risk of microbial infections - a serious consideration with actors and crew in a 100m pool of fake chocolate in the summer. ’We were asked to secure it for six weeks, and filming took twelve weeks - so towards the end we were putting all sorts of biocides in there to stop it going off,’ Driver said. ’They were just asking for it to go rancid!’

The company built a chemical plant at Pinewood studios and manufactured 1.25 million litres of the chocolate mixture there, to avoid transportation costs. ’It isn’t common for companies to go and build a plant on site - it was just the sheer scale that made it necessary,’ said Driver. Production staff all went to the film premiere in Leeds to see their efforts on the silver screen. ’It was definitely chocolatey enough,’ said self-confessed chocoholic Driver.

’We were competing with an alternative technology: computer graphics,’ said Driver. ’In the film industry they use computer graphics a great deal. But director Tim Burton decided that he wanted real liquid.’ It is surprisingly difficult to model realistic liquids on a computer, he added.

Chemists at Vickers agreed with the film’s makers to keep the formula secret until after the release in order not to disappoint youngsters who believed they were seeing real chocolate in the film.

Now it’s back to business as usual at Vickers. ’We sometimes make gunge and fake blood - but our day job is extremely different,’ said Driver. ’The majority of our turnover involves reagent solutions and laboratory chemicals.’ The company makes solutions for the water industry and for biomedical devices such as contact lenses. It also supplies schools and colleges with chemicals for use in science education. Helen Carmichael