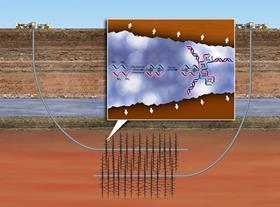 Carbon dioxide triggers a large and fast volume expansion, and a simultaneous increase in viscosity

Researchers in the US have created a chemically-responsive fluid to efficiently fracture rocks that could decrease the amount of energy required for fracking.

Current hydraulic fracturing methods are energy-intensive due to the need to pump, on average, 4 million gallons of water per reservoir, at very high pressures and flow rates deep into the ground. This water also contains additives including biocides, corrosion inhibitors and friction reducers.

The fluid, developed by Carlos Fernandez of Pacific Northwest National Laboratory and coworkers, expands by up to 2.5 times its original volume in response to carbon dioxide. It is made from poly(allylamine) and could reduce the volume of water required for fracking, as well as being non-toxic, a biocide, and a corrosion inhibitor, circumventing the addition of extra chemicals.

On stimulation with carbon dioxide, Fernandez’s fluid transitions from an aqueous solution to a hydrogel, exerting pressure and stress in the rock as it swells, which initiates fractures. This reduces the requirement for external pressure, and since the transition is reversible via carbon dioxide depressurisation or addition of acid, the fluid can be removed from the rock and recycled, further limiting its environmental impact.

‘The fracturing fluid is chemically-responsive, an interesting and promising characteristic that allows control over the system’s hydraulic pressure when needed,’ says Young-Shin Jun, an environmental and chemical engineer at Washington University in the US.

Fernandez says that if this technology can be reproduced on a large scale, the time required for reservoir formation could be reduced by half, as well as reducing the costs in comparison to current systems. The components required are readily available in bulk at reasonable cost.

Joseph Moore, an environmental engineer at the University of Utah, US, describes the fluid as ‘potentially game-changing’. ‘It has the potential to avoid the environmental issues associated with oil and gas polymers,’ he adds.

One of the next steps would be to test this technology on a metre-scale rock sample, as well as to develop and test the carbon dioxide-delivery methods on a larger scale. The team will also evaluate the fluid’s recycling capability by quantifying the polymer mass recovered under different conditions. However, they estimate that their technology could significantly decrease reservoir creation costs.