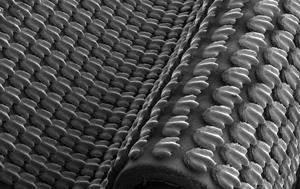 The Company of Biologists

The mystery of how – and indeed if – the tiny tooth-like projections on a shark’s skin improve the animal’s swimming efficiency has come a step closer to being solved, thanks to 3D printing. By using the technique, researchers at the University of Harvard in the US have fabricated the most realistic facsimile of shark skin to date, consisting of a flexible membrane embedded with tens of thousands of denticles – microscopic, rigid scales with a precise geometry. Tests showed that under certain conditions the presence of the denticles increases swimming speed by more than 6%, with a similar reduction in energy costs.

For decades it has been hypothesised that denticles play an important role in reducing drag. But demonstrating this in the laboratory and teasing out the important morphological features responsible has been tricky. ‘All the studies done so far have been with very simple rigid models,’ says George Lauder, one of the research team. ‘The problem is that when sharks swim they flex their bodies backwards and forwards, so the water flow is very complicated.’

The challenge, therefore, was to somehow attach stiff, rigid denticles to a flexible, flappable membrane to make a truly biomimetic shark skin. Lauder and his colleagues James Weaver and Li Wen turned to 3D printing.

The first step was to take a sample of real shark skin, in this case from the shortfin mako shark. The surface was scanned by micro-computerised tomography imaging and a three-dimensional model of the denticles constructed and fed to a highly sophisticated 3D printer. The first step was to lay down a flexible polymer rubber with similar flexing properties to shark skin. ‘As the printer deposited the substrate, in the position that we wanted a denticle, the nozzle changes to print the start of the denticle, and then resumes with the rubber until the next denticle site, and so on,’ says Lauder. In this way as the layers gradually build up, hard, rigid denticles became embedded within the rubbery substrate. 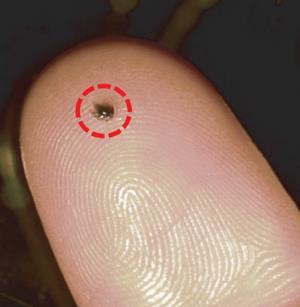 The Company of Biologists

Shark denticles are only 0.2mm long but 3D printers were limited to producing artificial denticles that were 1.5mm long

After much experimentation the team finally created a small section of biomimetic shark skin, a few tens of centimetres square containing tens of thousands of individual denticles. This was then attached to a robotic arm in a water tank, allowing the section of skin to oscillate as it would on a swimming shark. On real shark skin, a denticle is typically 0.1 to 0.2mm long; however, the intricate structural detail at this size was too fine for the printer to cope with, so the researchers had to scale their synthetic denticles to 1.5mm long.

‘Depending on the type of movement there were benefits in forward thrust of 2 to 6%,’ Lauder says. ‘This is highly significant for a fish that is swimming constantly.’ It is unclear if the improvement is because of reduced drag or increase in thrust caused by the formation of vortices at the skin’s surface, effectively sucking the skin forwards in the water.

‘By using 3D printing we can now modify and manipulate the surface to begin to find out more precisely how the effects are being caused and which structural features are responsible,’ Lauder says.  Eventually this technology could be used to improve the efficiency of surfaces moving through water. But a truly biomimetic shark skin swimming suit is unlikely to be on the cards for some time. ‘The manufacturing challenges are tremendous,’ Lauder notes.

Other experts in the properties of shark skin are impressed by the work. Amy Lang, a fluid dynamics specialist at the University of Alabama in the US says: ‘These results are very interesting, and point to the potential drag reductions benefits that can be obtained as scientists further understand the mechanisms at work on the shark skin.’

Oliver Crimmen, senior fish curator at the Natural History Museum in the UK, comments: ‘The ingenious use of 3D printing to get close to the situation in nature is a big jump in something that has been talked about a lot. These guys have moved the game on quite a bit.’