Chemists have finally uncovered why some molecules blatantly break the Woodward–Hoffmann rules in pericyclic reactions – minutiae that had been known for more than four decades but had never been investigated.

‘Violations. There are none!’ declared Robert Woodward and Roald Hoffmann confidently when they devised their eponymous rules in 1969. The rules can predict certain aspects of stereochemistry and activation energy in pericyclic reactions by examining orbital symmetries. 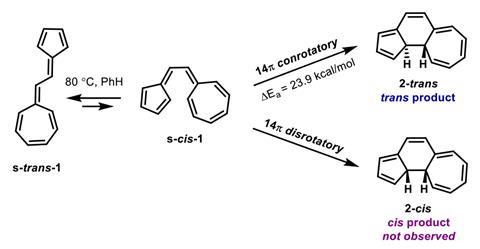 Yet in the late 1970s and early 1980s, chemist Horst Prinzbach and his team discovered a vinylogous sesquifulvalene and a fulvene–hendecafulvene system that somehow ignored these rules. In an electrocyclisation, these compounds form only the ‘forbidden’ trans products. Since then, several others molecules have been found to follow forbidden mechanistic paths. But unlike for other molecules, whose behaviour has been attributed to structural strain or diradical character, Prinzbach’s molecules had remained a mystery.

Now, chemists in the US seem to have solved the case. The team’s computational investigations show how the molecule’s high polarisation allows it to disregard the Woodward–Hoffmann rules. It essentially acts like a cyclopentadienyl anion attacking a cycloheptatrienyl cation – a reaction that isn’t bound by the symmetry rules.

Formally forbidden reactions can become favoured anytime strong polarisation disrupts the nodal behaviour in linear polyenes. If there is a sufficiently powerful acceptor at one terminus, it acts like a localised carbanion while the other end becomes a carbocation. If this is the case, the favoured product is not dictated by the rules but rather by other subtle effects, like the transition state’s shape.

The researchers now want to expand their work and formulate a general theory of pericyclic reactions in polar molecules.