Researchers in the US have isolated partially fluorinated trityl cations and demonstrated that they can act as powerful hydride abstraction agents for organometallic reactions.

The trityl (or triphenylmethyl, Ph3C+) cation is ubiquitous in organometallic chemistry and catalysis. Three bulky phenyl groups stabilise a positively charged central carbon atom allowing for its isolation, and the electron-deficient nature of the central carbon makes the trityl cation a useful reagent for hydride and alkyl abstractions, or as a one-electron oxidant. Chemists can increase the electrophilicity, and therefore the reactivity, of the trityl cation by adding electron-withdrawing substituents to the phenyl groups, which is especially useful when trityl on its own is not a strong enough hydride abstracting agent. 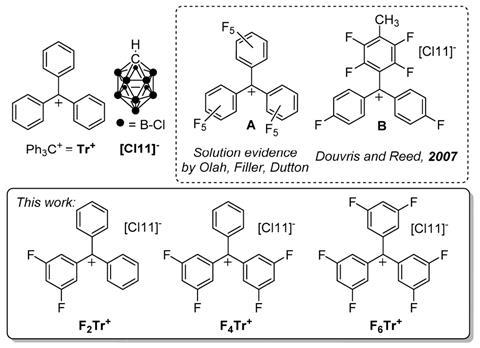 Based on their research on the use of silylium cations (R3Si+) for the activation of strong carbon-fluorine bonds, Oleg Ozerov and team at Texas A&M University in the US sought to create a more electrophilic trityl cation with a higher hydride affinity, to access more reactive and electron-poor silylium reagents. The researchers have now synthesised a series of partially fluorinated trityl cations as more electron-deficient/Lewis acidic derivatives, building on previous calculations that indicate greater hydride abstraction power for fluorinated trityl analogues.1 Ozerov says that with these new fluorinated trityl cations, the team is ‘pushing the boundaries of what is possible synthetically, by trying to access the highest degree of soft Lewis acidity for a cation in an organic solvent.’

The team synthesised di-, tetra- and hexafluorinated trityl salts, where either one, two or all three phenyl rings of the trityl cation contain two meta-fluorine substituents, and paired the cations with a robust and weakly coordinating carborane anion. All three trityl salts rapidly formed via chloride abstraction from the related trityl chloride in organic solvents at room temperature and were isolated as pure solids in high yields. NMR spectroscopic and crystallographic characterisation of the trityl salts indicated no significant interaction between the trityl and carborane, confirming the cationic nature of the newly formed species.

Ozerov’s team tested the most electrophilic hexafluorinated trityl salt for hydride abstraction reactivity with triethylsilane, as well as mesitylene and methylcyclohexane with benzylic and aliphatic C–H bonds, where trityl alone is not thermodynamically strong enough for hydride abstraction. Whilst the researchers struggled to establish the mass balance of the organic products formed, in all three instances they observed the hexafluorinated triphenylmethane hydride-abstraction product, confirming the stronger hydride affinity of the hexafluorinated trityl cation. Michael Ingleson, an expert in electrophilic main group chemistry at the University of Edinburgh, UK, says these ‘interesting findings could offer the organometallic community another reagent to turn to when the parent trityl salt is not up to the job.’