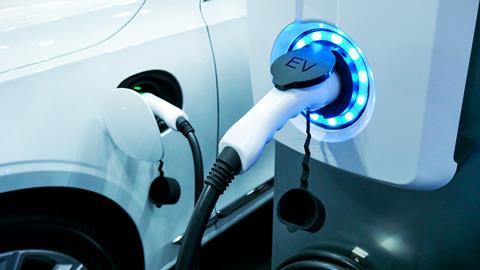 One of the key roadblocks holding back electric vehicles may have been broken after US researchers found a way to charge batteries enough in under nine minutes to keep a car on the road for 200 miles. By heating up typical lithium-ion batteries Chao-Yang Wang from Pennsylvania State University and colleagues suppress chemical problems hampering fast charging. ‘We are pushing the boundary and striving to achieve five minute charging to 80% energy without damaging the battery,’ Wang tells Chemistry World. ‘This will allow us to achieve parity with gasoline refuelling.’

Wang’s team preheats batteries to 60˚C in 30 seconds, then charged them to 80% of their maximum energy capacity, equivalent to 200 miles driving range, in 503 seconds. The charging rates the researchers use are normally high enough to rapidly damage batteries. Yet the heated batteries lost just 20% of their capacity or less over 1700–2500 charge cycles, equivalent to 340,000–500,000 miles of driving.

By comparison, the US Department of Energy’s current target for fast charging methods is 500 cycles with 20% degradation. And today, a Tesla Model S supercharger takes 40 minutes to get a flat battery to 80% of maximum capacity.

High temperatures speed up the growth of a solid electrolyte interphase containing lithium and other battery materials. This surface film degrades batteries by reducing the number of lithium ions available to move around. Owing to this, previously ‘no one had dared’ to try heating batteries as they charge, Wang says.

‘Through extensive experiments and theoretical analysis, we realised that the surface film formation at high temperatures depends on time,’ Wang explains. Limiting the exposure time therefore minimises battery damage. Ten minutes per cycle is roughly seven days at 60˚C over 15 years of driving, Wang and colleagues estimate, or 0.1% of the battery’s lifetime.

The researchers also found that high temperatures suppress another important chemical degradation process, known as lithium plating. In that process, rather than lithium ions nestling into graphite anodes, lithium atoms instead plate the anode surface. This a key problem faced at the high charge rates needed to quickly replenish batteries. The team’s scanning electron microscope and x-ray photoelectron spectroscopy studies show much less lithium plating when charging at 60˚C than at room temperature.

Rapid charging at room temperature leads to lithium plating, producing dendrites on batteries’ graphite anodes (left) and degrading the energy they can store, but not at 60˚C (right).

The researchers enable heating by embedding lightweight resistive nickel foils inside standard battery designs. When first plugged in, the foil takes electricity directly from the charger, with very little leaking into the battery. When it reaches 60˚C, a switch flips and all the electricity then flows into charging the battery. This simple design ‘should be very close to commercial products’, Wang says, both for cars and other applications, such as smartphones. ‘Our batteries have been independently tested and verified by Argonne National Laboratory as part of the US Department of Energy’s Extreme Fast Charging Program.’

The study is ‘intriguing’ according to Clare Grey from the University of Cambridge, but must be scaled up to bigger battery packs with different heat management issues. She also doesn’t expect such batteries to actually reach the 500,000 mile lifetime experiments suggest. ‘Lithium plating and solid-electrolyte interphase growth are not the only degradation mechanisms,’ Grey stresses.

The University of Sheffield’s Eddie Cussen agrees that ‘other battery ageing processes may come in to play with many years of usage in a real-world duty cycle’. ‘A battery in a fast-charging test will still be relatively young at the end of 2500 cycles,’ he says. ‘But this work does represent an exciting practical demonstration that thermally managing battery processes can strongly enhance performance in current battery chemistry.’