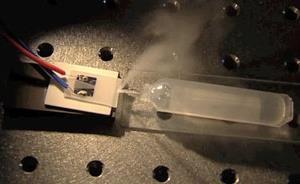 Scientists in Australia have made a portable device that gently vibrates stem cells with sound waves to turn them into an aerosol. The system could be an effective route for treating various pulmonary diseases.

Chronic obstructive pulmonary disease (COPD) is predicted to be among the leading causes of global mortality in the next 5 years. A lung transplant is currently the most effective therapy, but suffers from major drawbacks such as a shortage of lung donors and high mortality rate after transplantation.

Inhaling an aerosol of stem cells is an attractive alternative as it delivers stem cells directly to the lung via inhalation, facilitating local targeting of the disease, minimising side effects, and allowing easy and painless administration. However, current conventional ultrasonic nebulisers used for this purpose subject the aerosols to intense stresses, such as high voltage, pressure, and power, meaning the cells may not be viable after delivery.

Peggy Chan at Swinburne University of Technology in Melbourne and her team have found a way around this. They electrically stimulated a circuit on top of a piezoelectric lithium niobate chip, triggering ‘nano-earthquakes’ known surface acoustic waves (SAWs). These waves are like small earthquakes travelling only along the surface of the chip, creating vibrations that consequently turn a stem cell solution into an aerosol.

SAWs operate at sufficiently high frequencies (10–100MHz) to nebulise the cells over a much shorter period compared to conventional nebulisers, eliminating the risk of lysis or denaturisation. Their device also enables the nebulisation of cells at very low power, only 1.5W, meaning it can be battery powered and about the size of a mobile phone.

‘It has already been scientifically proven that stem cells can generate factors that have anti-inflammatory effects on the lung,’ explains Chan. ‘Furthermore, after aerosolisation we found that the stem cells did not change their properties or viability and still expressed the gene and proteins that they are supposed to as stem cells.’ The team’s assays showed that the cells retained almost 90% viability after aerosolisation.

Experts in microfluidics for bio-applications have praised the innovative idea. Ciprian Iliescu, at the Agency for Science, Technology and Research (A*STAR) in Singapore, describes this as a ‘breakthrough’ and ‘out of the box’ work. ‘Unlike a traditional aerosoliser which needs a nozzle, the design of the device is great as it is nozzle free, avoiding any blockage and contamination problems that are commonly encountered by a traditional aerosoliser,’ he adds. Praveen Vemula at the Institute for Stem Cell Biology and Regenerative Medicine, Bangalore, India, agrees that SAW nebulisation of cells ‘is a significant advance in inhaled cell delivery and generalisation of this platform technology to a wide range of cell types might lead to innovative ways to treat pulmonary diseases in the future’.