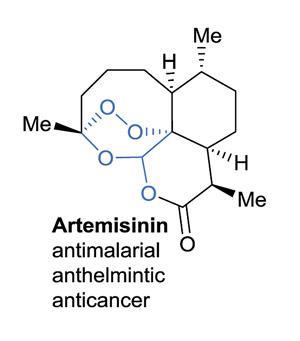 Scientists in the US and Russia have performed theoretical calculations to better understand the well-known instability of peroxides as well as the astonishing higher stability of bis- and tris-peroxides.1 For the latter, they found that multiple O–O bonds appear to exert a stabilising stereoelectronic effect on each other, which boosts stability.

The peroxide functionality is most unusual and – on the brink of stability – has always had the reputation of a dangerous group likely to react abruptly. Based on this, it can be found in highly reactive compounds such as explosives and radical initiators. However, in recent years peroxides have gained further importance as highly reactive but efficient antimalarial drugs such as artemisinin for which Youyou Tu just received the 2015 Nobel Prize in Medicine.

‘In this context, it is important to understand the fundamental factors that control intrinsic stability of peroxides,’ says Igor Alabugin from Florida State University. Alabugin and his colleagues were inspired by recent findings of scientists from the Russian Academy of Sciences in Moscow. These findings showed that combining two unstable peroxides in a single molecule leads to more stable compounds, which could even melt well above 100°C without decomposing.2 Alabugin’s group suspected that an intrinsic anomeric effect might be the reason for the increased stability. In carbohydrates, the anomeric effect describes an increase in stability due to the beneficial overlap of a free electron pair of oxygen with the empty antibonding s* orbital of an adjacent C–O bond. The computational studies of different peroxides with up to three peroxide moieties showed that this is indeed the case. Peroxide moieties next to appropriate electron-accepting C–X bonds or connected to each other via a CH2-group are significantly more stable than mono-peroxides.

‘The results provide us a better understanding of this important class of molecules while simultaneously offering a useful tool for approaching design and synthesis of new peroxides,’ says Patrick Dussault, who works in the field of peroxide chemistry at the University of Nebraska–Lincoln, US. Frank Weinhold, an expert in natural bond orbital (NBO) analysis – the strategy used in this study – from the University of Wisconsin–Madison, US, elaborates further: ‘The impressive display of modern stereoelectronic and hybridisation reasoning also serves to emphasise the importance of improving the teaching of such orbital concepts throughout the chemistry curriculum.’

In the future, this study should motivate the rational design of new drug molecules using bis- or tris-peroxides, but also prompts new questions on the importance and overall influence of the anomeric effect for the reactivity of peroxides.