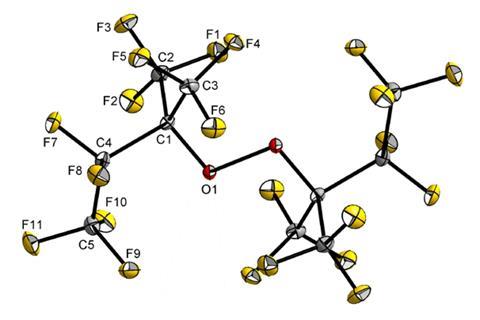 For the first time, chemists have been able to study the crystal structures of some perfluorinated organic peroxides – molecules that are usually highly unstable and even explosive. Despite the wealth of fluorine atoms in these compounds, the peroxides proved stable to impact and friction, making them useful oxidation-resistant solvents for reactions such as halogenations.

The double oxygen group in the centre of organic peroxides makes them strong oxidisers and a source of radicals to initiate polymerisations. It also makes them prone to self-accelerating decomposition and explosions that can be triggered by heat, shock or friction.

One might think that replacing hydrogen atoms with fluorine in organic peroxides would make them more unstable, but a team of German chemists found the opposite to be true.

The researchers made two peroxides – bis(nonafluoro-tert-butyl) peroxide and bis(undecafluoro-2-methyl-2-butyl) peroxide – by reacting the corresponding hypofluorites with fluorinated silver wool. This synthesis avoids chlorine trifluoride, a corrosive, poisonous and dangerously reactive substance often used for making such compounds. Crystal structures – the first ever recorded of perfluorinated peroxides – showed a trans conformation and 180° dihedral angle along the molecules’ COOC backbones.

Both perfluoroperoxides were classed as insensitive to friction and impact following sensitivity tests. Although the fluorinated peroxides break up into alkoxy radicals as readily as their non-fluorinated analogues, their secondary reaction back to the hypofluorites are slow and endothermic rather than explosive.

As strong oxidants, perfluorinated peroxides are inert towards other oxidising substances such as hydrofluoric acid or bromine. The peroxides’ benign nature might make perfect solvents for reactions involving these compounds, the scientists suggest. Nevertheless, a note at the end of the study warns others of the peroxides’ explosion potential when mixed with other substances.