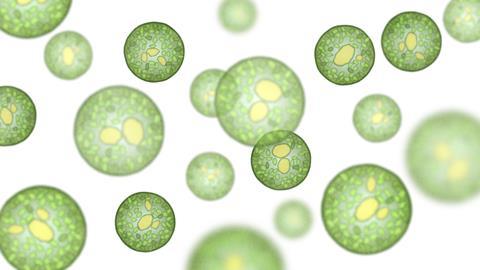 Scientists in Germany searching for a sustainable raw material for making benzene have found that they can convert eicosapentaenoic acid, a lipid found in microalgae, into the useful organic compound.

‘Benzene is one of the most important starting materials in terms of aromatics for a very large range of desirable compounds,’ comments Stefan Mecking at the University of Konstanz. Industry sources benzene from crude oil, but diminishing supplies necessitate renewable alternatives. In the past, scientists have shown that useful aromatic compounds can be prepared from lignin, but such processes produce complex mixtures of several products. Now, Mecking and his team have shown that eicosapentaenoic acid is a promising alternative. 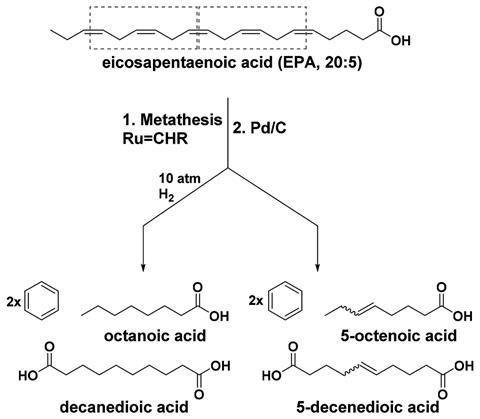 Self-metathesis of eicosapentaenoic acid, and a possible subsequent homo-metathesis of the produced 5-octenoate to produce 3-hexene and 5-decenedioate, and two equivalents of benzene after dehydrogenation

Side products formed during reactions reduce its overall efficiency. However, the team designed the reaction to minimise waste. The two main side products, 5-octenoic acid and 5-decenedioic acid, are hydrogenated during the second step to form useful products.

‘The proposed approach is elegant, being efficient although moderately sophisticated, with promising potential,’ comments Rafael Luque, an expert in biomass valorisation from the University of Córdoba, Spain. Although ‘a few challenges lie down the road’, including finding alternatives to expensive ruthenium catalysts, Rafael notes the importance of this contribution to the scientific community. ‘The possibility to work with real algal feeds and continuous flow processing may hold additional potential as a follow up approach of this nice preliminary work.’

In the future, Mecking anticipates this work as being ‘a part of an answer on how a biorefinery based on microalgae could really look’, picturing a biorefinery ‘that is able to generate a whole scope of desirable chemicals’.