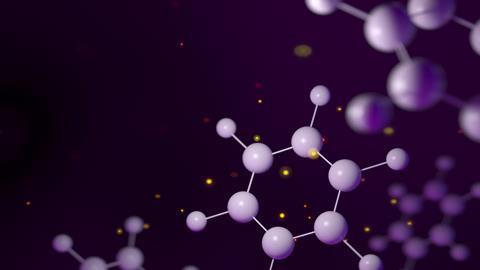 Ask a member of the public to come up with a profession where you can get on by being a bit of a dreamer, and they are likely to imagine a poet or an artist. but definitely not a chemist. Chemists are made of doughty stock, hard working, focused, serious scientists, not dreamers. And yet consider these words, famous in the chemical community:

'I was sitting writing at my textbook but the work did not progress; my thoughts were elsewhere. I turned my chair to the fire and dozed. Again the atoms were gambolling before my eyes. This time the smaller groups kept modestly in the background. My mental eye, rendered more acute by the repeated visions of the kind, could now distinguish larger structures of manifold confirmation: long rows, sometimes more closely fitted together, all twining and twisting in snake like motion. But look! What was that? One of the snakes had seized hold of its own tail, and the form whirled mockingly before my eyes.' 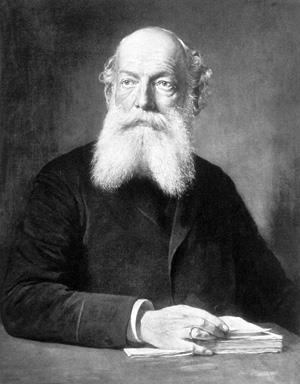 This account, suited apparently to the rantings of some Victorian opium fiend, obsessed with the Ouroboros worm of mythology, was the German chemist Friedrich August Kekulé von Stradonitz (known more compactly just as Kekulé) recounting his dream realisation of the structure of one of the most important organic compounds, benzene. It wasn't his first venture into dream analysis of molecules. He had earlier, while on the open top deck of a London omnibus bound for Clapham, had a reverie that gave him his first insights into a structural theory of organic molecules, but the benzene dream remains the most famous.

There is something very elegant about benzene. With a formula of C6H6 it has one hydrogen atom for each carbon atom, a trick it achieves by having the six carbon atoms in a hexagonal ring, that snake seizing its own tail of which Kekulé dreamed. This rather sweet and sickly smelling, highly flammable, clear liquid is the simplest of the aromatic hydrocarbons. Unlike their aliphatic counterparts, aromatic rings have alternating single and double bonds between the carbon atoms. (Technically something rather more sophisticated is going on in the benzene ring, as all the bonds in the ring are identical, with electrons shared over all six carbons, but the alternating single and double bonds are a useful representation.)

This compound had been in the apothecary's toolkit since the middle ages, but it was Michael Faraday who correctly identified its makeup in 1825. Benzene occurs naturally when some organic compounds are partially burned - it is present in cigarette smoke, and forms as a result of volcanic action and forest fires. It was first produced industrially as a by-product of making clean-burning coke from coal, and since the 1960s has primarily been made by catalytic reforming of mixtures of other hydrocarbons with hydrogen to form various aromatic compounds. 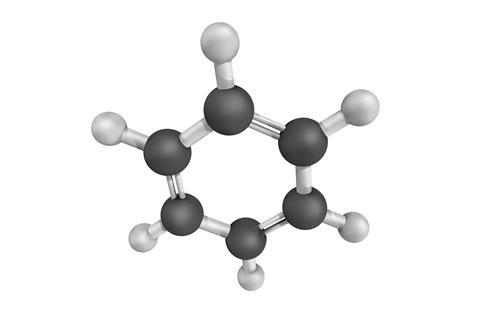 Rather worryingly, one of the first uses of benzene was as an aftershave - worrying because this substance that was merrily being splashed on faces is now known to be a powerful carcinogen. Its sickly sweet odour was apparently considered attractive, though it's hard to imagine this now. Benzene went through a number of other passing uses - for example as a solvent, degreaser and an anti-knocking agent in petrol - before settling down as an important raw material in petrochemical production.

Perhaps the most significant of its roles is in producing styrene. This is a relatively simple organic molecule with an extra carbon-carbon double bond bolted on to the ring. Styrene is then used to make a number of plastic polymers, most notably (and obviously) polystyrene. Millions of tonnes of benzene are produced for the plastics industry every year.

Benzene's toxicity means that it does occasionally make it into the news as a bad guy. In fact, if you look up benzene on the internet you will mostly find references to being poisoned by it, rather than its contribution to manufacturing. The most famous incident where benzene appeared to threaten the public was in 1990, when the bottled water manufacturer Perrier was forced to withdraw their water from sale after benzene was found in a number of bottles in America. Over 150 million bottles were withdrawn, though the incident seems to have been due to a local problem with a filter system, rather than any contamination of the source spring. 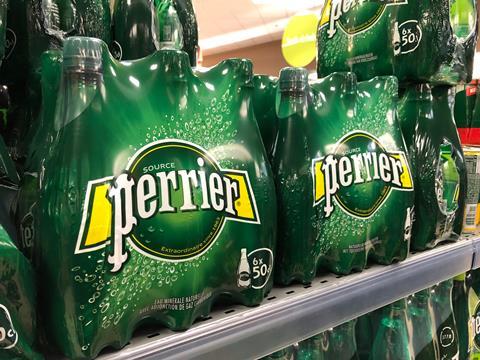 More often, low levels of benzene have been found in soft drinks where benzoic acid salts have been used as preservatives. Benzoates can be transformed into benzene in small quantities, both as a result of an interaction with vitamin C and with heat and light. The levels of benzene have usually been within accepted limits, but some manufacturers have withdrawn the use of these preservatives.

When, as a student, I had a summer job in an industrial lab, the initiation ritual for newcomers was to be sent off to the stores to request a handful of blue benzene rings. The amusement value of this 'joke' may long have worn thin, but the beautiful simplicity of benzene's cyclic structure will always remain a marvel.

So an essential ingredient in industry, but with a slight reputation as a villain. That was Brian Clegg bringing us the many uses of the structurally simple compound benzene. Now next week, what do the witches in Macbeth and cancer-treating drugs have in common?

The witches in Macbeth were happy to mix their slips of yew and root of hemlock as they prepared their poisonous brew; while English archers at Agincourt relished the killing power of their yew longbows. Now centuries later, this association of the yew tree with death has been resurrected - but now it is the death of cancer cells rather than human beings that is the focus of attention. Though it was the Pacific yew - Taxus brevifolia - rather than the European yew which first provided the potent and broad spectrum anticancer drug Taxol.

And to find out just how the compound taxol fights the deadly effects of cancerous cells, join John Mann from Queens University, Belfast, in next week's Chemistry in its element. Until then, thank you for listening. I'm Meera Senthilingam