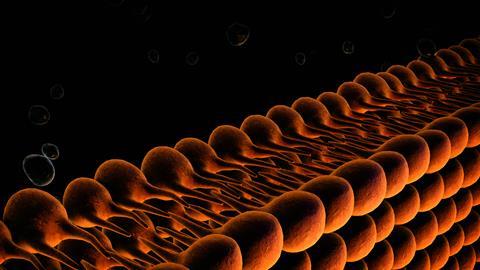 Researchers have developed a tandem mass spectrometry-based workflow capable of characterising and quantifying phosphatidylcholines, a major class of mammalian lipids. Previously, this task has involved complex instrumental set-ups or chemistry. Now, scientists have found a way to achieve the same goal using only standard instruments by adding ammonium bicarbonate into the lipid mixture.

Phosphatidylcholines are essential structural components in cell membranes and are integral to cell signalling and gene regulation. Valuable as biomarkers in cancer research, these lipids are notoriously diverse in chemical structure as not only are there are multiple possible carbon–carbon double bond locations, but the position of the fatty acyls on the lipid glycerol backbone (known as the sn-position) can also vary. Nevertheless, characterising lipids is vital to understanding their cellular function. ‘Now people are realising they [the isomers] are there and it’s important to find out where they are, what they are and how they change’, explains, Yu Xia of Tsinghua University, who led the work.

When Xue Zhao, a PhD student in Xia’s group, discovered an unexpected peak in her mass spectrum while analysing a phosphocholine lipid, she began to investigate its identity. The peak turned out to correspond to an anionic bicarbonate adduct, which Xia reckons may have been caused by carbon dioxide from the scientist’s breath dissolving into the lipid solution.

Having spotted this mysterious peak, the researchers carried out further experiments and realised that bicarbonate binds strongly with the phosphocholine headgroup of these lipids. During tandem mass spectrometry, colliding analyte ions with neutral molecules at high speed causes them to fragment – a technique known as collision induced dissociation (CID). Usually, this process is charge directed and so cannot differentiate isomers. However, in the presence of bicarbonate, the lipid fragments via a radical-directed pathway instead. One particular carbon–nitrogen bond in the structure is homolytically cleaved so that the sn-1 fragment and sn-2 fatty acyl form separate ions. By quantifying these species, the scientists could obtain the isomeric ratio. They then combined this technique with protocols they had already developed for pinpointing carbon–carbon double bonds, and tested the overall procedure by analysing lipid extract from bovine liver, identifying 82 distinct lipid species, including 19 pairs of sn-isomers. 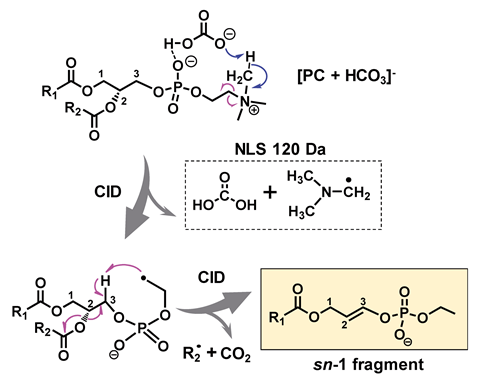 Although there have been reports of using very specialised instruments or complicated techniques to determine sn-positions, this workflow is much more straightforward as it uses CID, the most commonly used tandem mass spectrometry technique for lipid profiling, to distinguish and quantify the isomers. The researchers simply introduced ammonium bicarbonate by adding it into the mobile phase during liquid chromatography, which is often necessary before introducing lipids into a spectrometer. ‘The chemistry is just bicarbonate chemistry! With any commercial instrument that has the capability of using tandem mass spectrometry through collision induced dissociation you can do this, so there’s no instrument modification at all,’ explains Xia.

‘Having the complete structure will allow us to make a better connection between that structure and the function,’ explains Gavin Reid, whose group at the University of Melbourne, Australia, also develops lipidomics methodologies. This will improve scientists’ understanding of the role lipids play in disease. Reid highlights that Xia’s group is ‘not only developing these advanced technologies but they’re also applying them to obtain novel insights into relevant biology, in this case cancer.’

As a proof of concept, Xia’s team investigated whether changes in phosphatidylcholine sn-isomers could differentiate diseased and healthy tissue, to test the applicability of the lipid isomers as biomarkers in cancer research. Analysing normal and cancerous tissue, they found that five out of 26 pairs of phosphatidylcholine sn-isomers showed significant differences in the isomer ratio.

Xia’s team now plans to integrate data visualisation and analysis software into the procedure so that other labs can capitalise on this bicarbonate chemistry-based approach.