An unlikely inorganic benzene has been made by scientists from Singapore and China. The molecule is a nitrogen–boron zwitterion featuring a rare bridging bond between π orbitals on opposing sides of the ring. 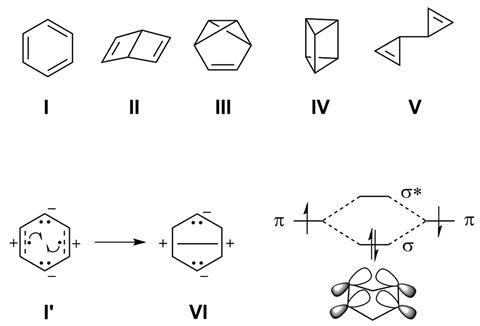 Benzene and its valence isomers (top) some of which have been synthesised. The four-centre two-electron bonding interaction via σ-type overlap of two π-orbitals to create the inorganic benzene is shown (bottom)

Before August Kekulé dreamt up the hexagonal ring structure of benzene, scientists suggested various strange structures for C6H6. Some of them – like Dewar benzene and prismane – were eventually synthesised. Computational studies have now identified more than 200 benzene valence isomers, though most of them are probably too unstable to ever exist.

A team of researchers has now made one of the zwitterionic benzene isomers – a molecule that has two positive and two negative charges but is overall neutral. However, the compound isn’t made out of carbon, but instead contains four boron and two nitrogen atoms.

Although technically a six-membered cyclic benzene isomer, the nitrogen–boron ring is highly distorted to allow stabilised four-centre two-electron bonding across its centre. As the two boron pairs are separated by nitrogen atoms, delocalised electrons flow through a σ-bonding interaction between the opposing boron π orbitals.

The team made the compound by reducing a substituted diazatetraborinane with potassium carbide and then stabilising the potassium counterions with a crown ether. Crystals of the inorganic benzene are made of dimeric units comprising two boron–nitrogen rings, as well as two potassium atoms and a tetrahydrofuran solvent molecule.