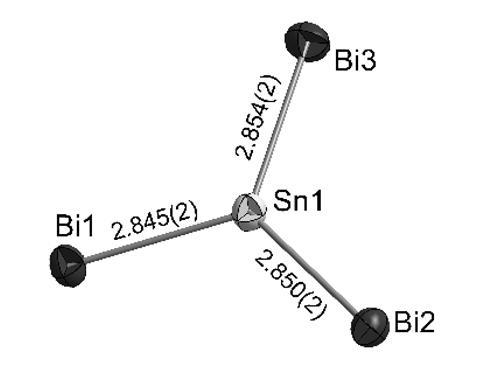 It’s shaped like carbonate, has the same 24 valence electrons and resonance structures, but is made completely out of metal atoms. This is the tin-bismuth anion [SnBi3]5–, the first all-metal carbonate analogue known to exist in solution.

Having discovered a metal analogue of carbon dioxide – the zinc–bismuth ion [ZnBi2]4– – a few years ago,1 Thomas Fässler’s team at the Technical University of Munich, Germany, has now found [SnBi3]5–, a structural and valence electron mimic of carbonate, CO32–.2

Like carbonate, the bismuth–tin ion is shaped like a flat, equilateral triangle. Moreover, the ion has three equal-length tin–bismuth bonds and all bismuth atoms are equally negatively charged – a state of affairs that, as is the case with carbonate, can only be described in terms of three resonance structures.

Fässler’s team made the unusual metal ion by mixing a potassium bismuthide (K3Bi2) and a potassium stannide (K4Sn9) at –70°C in liquid ammonia. After a full seven months, the deep red–purple solution yielded black crystal needles, which the team identified as K5[SnBi3]·9(NH3), a compound comprising the metal carbonate ion, potassium counter-ions and crystal-bound ammonia.