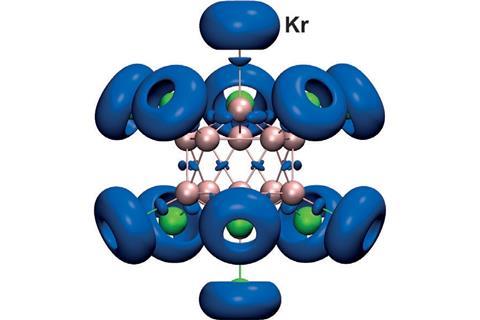 Visualisation of the orbital energies of [B12Cl11]– (chlorine – green; boron – pink) as it displays its surprising behaviour of binding to krypton, something that wouldn’t be expected of an anion

Although a superelectrophilic anion sounds like an oxymoron, a boron cluster that fits this description has been made by researchers in the US and Germany.

Usually, anions are described as nucleophilic: having a surplus of electrons and wanting to donate those to an electrophile, a chemical species short on electrons.

A team headed up Simon Grabowsky from the University of Bremen and Jonas Warneke from Pacific Northwest National Laboratory has now found a dodecaborate [B12Cl11]– that, despite being an anion, is electrophilic. It strongly binds the noble gases xenon and krypton – a property that chemists thought to be reserved for cationic compounds referred to as superelectrophiles.

Having examined the [B12Cl11]– by mass spectrometry, infrared spectroscopy and through computational analysis, the scientists found that it binds well to nonpolar nucleophiles like nitrogen or noble gases, but not to polar nucleophiles such as water. The cluster reacts like a cationic, electrophilic boron atom inside a dianionic framework, leading the team to dub it a ‘dipole-discriminating electrophilic anion’.

The dodecaborate is also the first example of a boron–noble gas bond in an anion. Grabowsky and Warneke think this and similar compounds may find use in noble gas separation.