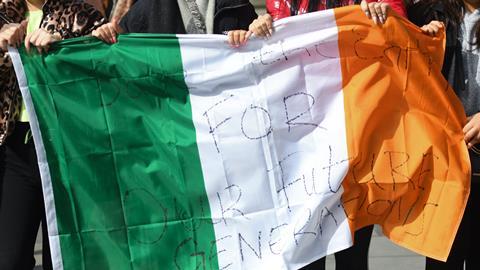 The Irish government has launched an ambitious climate action plan with the aim of reaching net zero-carbon emissions by 2050.

The plan sets demanding targets in almost all relevant sectors, with 180 actions set down, mostly targeted to 2030. It follows similar recommendations to achieve net zero-emissions by the Committee on Climate Change in the UK, with Germany recently joining calls for the EU to adopt this target.

The goal is for renewable energy to supply 70% of Ireland’s electricity by 2030, up from a target of around 30%. A target of almost one million electric vehicles has also been set, with legislation slated to ban petrol and diesel cars from 2030.

Half a million homes are to be retrofitted to boost energy efficiency. Installation of oil boilers will be banned from 2022 and gas boilers from 2025 in all new homes, with plans for 400,000 heat pumps.

The plan attempts to tackle the country’s poor record of cutting emissions. The EU, as a whole, has reduced emissions by around 28% since 1990, whereas Ireland’s emissions climbed around 18%. ‘Ireland has consistently ranked as the worst or the second worst performing country on climate change in the EU,’ says Joseph Curtin, senior fellow for climate policy at the Institute for International and European Affairs, an Irish thinktank.

‘Ireland’s economy has grown rapidly, but to be this much out of kilter with our European partners is not sustainable,’ says Curtin. Ireland’s 2020 target is to reduce emissions by 20% from 2005 levels, but this will be missed. Currently the country is dependent on fossil fuels for 85% of its electricity and the plan envisions shutting all peat and coal-powered plants.

There are around 5000 electric vehicles in Ireland, and some commentators doubt the one million target is achievable by 2030. Ireland’s renewables target is 16% by 2020, but will fall of this short by 13%. The country already faces EU fines when it misses its 2020 emission targets.

To hit the 2030 targets, five-year carbon budgets will be drawn up, with an independent climate action council recommending budgets for different sectors. Carbon taxes will rise from €20 (£18) per tonne to €80 by 2030.

A standout problem is that agriculture accounts for one-third of Ireland’s emissions. The plan is vague on agriculture, particularly tackling methane emissions from the beef and dairy sectors.

Dave Reay at the University of Edinburgh, UK, describes the plan as ambitious and notes the proposed 2030 ban on petrol and diesel cars goes further than UK’s 2040 target. ‘I’d expect the UK and Scottish government to bring their own targets forward to 2030 too,’ he adds.

The Irish plan meets an EU goal that all member states map out how they are going to cut emissions by 80–95% emissions by 2050. ‘Europe is upping the ante, saying it wants to do more, faster,’ explains Miranda Schreurs, comparative climate policy researcher at the Technical University of Munich, Germany. ‘Before they said 27% renewables by 2030, but this was upped to 32% in 2018.’ She predicts that the EU will soon adopt a 2050 zero-emissions target, although recent efforts to include this aspiration in an EU text were blocked by three central European countries.

‘The scientific community tells us we have less than 10 years left to more or less halve our global emissions if we want to keep within the 1.5°C increase,’ she says. ‘We better ensure we don’t go above 2°C, because it is looking like the scientific reports of the past were too conservative and predicted a lot of changes [we see now] would happen further down the road.’ The Paris Agreement set out plans to limit warming to 2°C.

What is listed in the report is ‘terrific’, Schreurs says, ‘but now need to be worked out in more detail. The next step is turning it into action.’ Ireland’s poor record is dampening any heady optimism. ‘These are enormously ambitious targets, but we will know this plan is working when emissions in Ireland start coming down,’ observes Curtin.