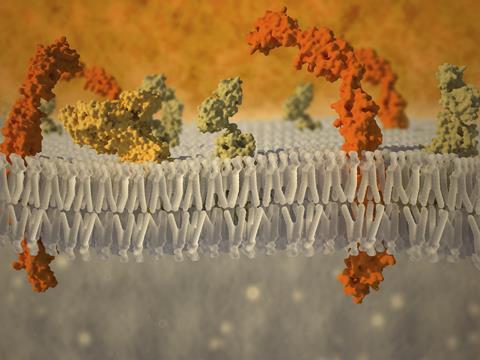 Scientists have found that the drug propranolol can react with lipids in cell membranes. As the products of such reactions may have negative biological effects, this discovery has implications for drug safety and development.

Lipids are the primary component of both cellular and intracellular membranes. Peptides regularly react with lipids in lipid membranes, a physiologically important process called lipidation. However, peptide lipidation is also associated with diseases, including parasite infections, neurological diseases, diabetes and cancer. If the same reaction happens to drug molecules, it could help explain some drug side effects.

To look into this notion, John Sanderson of Durham University, UK, and his team began with the blood pressure drug propranolol. Propranolol is a small, organic molecule with well-characterised membrane binding properties. It also triggers a lipid storage disorder called phospholipidosis that is associated with scores of other drugs.

The team started by testing synthetic liposomes composed of either a single type of lipid or a mixture of two lipids, as a simplified model of what you find inside a cell. They also investigated liposomes extracted from either Escherichia coli or liver cells; these extracts were more complex and therefore more representative of the inside of a cell. They incubated the liposomes with propranolol and used mass spectrometry to identify the molecules present. The results suggest that a transesterification reaction happens and transfers an acyl group from the lipids to the propranolol molecule. 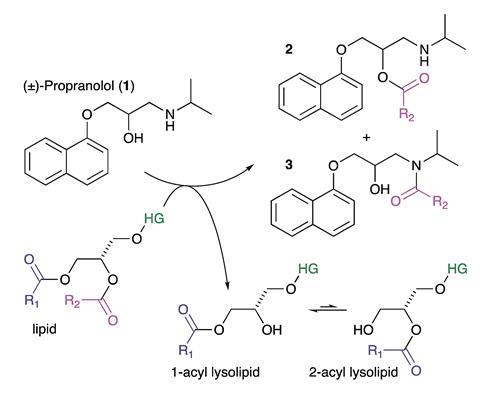 Propranolol may undergo both aminolysis and transesterification reactions, both of which lead to the formation of lysolipids. Key: HG = headgroup

Having demonstrated that lipidation was occurring in their model systems they wanted to know whether it would also occur in living cells. They incubated Hep G2 cells, a system frequently used to investigate liver cell function, with propranolol and extracted the contents of the cells for mass spectrometry analysis. Along with a range of lipids, they found 14 lipidated propranolol homologues.

Next, the team tested several other drug molecules that can induce phospholipidosis, including fluoxetine and sertraline, using one of the synthetic liposome models. While all the molecules tested caused lipid hydrolysis, only propranolol underwent a lipidation reaction.

‘This is a really interesting piece of work showing that drugs can chemically react directly with membrane lipids,’ comments membrane biophysicist Nick Brooks of Imperial College London, UK. ‘The reactivity of lipid membranes is critical to their function – this work highlights the importance of lipid chemistry in the design of drugs and in the future may lead to development of therapeutics with improved transport properties or reduced side effects.’