Until recently, standard tests to detect toxins in shellfish involved mice. But now the UK has replaced these animal tests with new analytical chemistry techniques that saved 14,000 mice in 2012. If the techniques were adopted worldwide, it could save a million mice, estimates the Centre for Environment, Fisheries and Aquaculture Science (Cefas), which developed the new testing standard.

Naturally occurring algal toxins can accumulate in filter-feeding bivalve molluscs and sometimes in other shellfish. If people eat contaminated shellfish, the health effects can be serious, or even fatal.

Okadaic acid is one of a class of lipophilic shellfish toxins

Developing non-animal tests to test for shellfish toxins was not straightforward, as Andy Turner, principal chemist in Cefas’ food safety group, explains. ‘The mouse bioassay is a direct toxicity test, whereas replacement analytical methods require the accurate quantitation of individual toxins, knowledge on toxicity equivalence factors and access to certified reference standards for each of the commonly detected toxins.’

In addition, the team had to spend a great deal of time refining the methods, says Turner, testing ruggedness and looking at ways to make them more stable. Validation then had to be done for each shellfish species in turn, he adds. The validation process also required the researchers to generate a range of toxic shellfish to mimic the production of contaminated shellfish in the natural marine environment. Developing mass culturing and shellfish feeding techniques was time-consuming and not easy, Turner says. 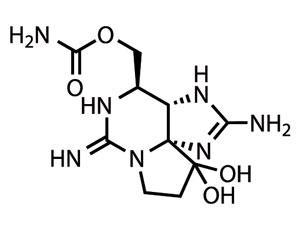 Saxitoxin is responsible for many cases of paralytic shellfish poisoning

Cefas believes its tests confer significant performance advantages as the tests can detect lower levels of toxins. During his research, Turner discovered that the PSP LC test gave toxicities 2–3 times higher than the mouse bioassay in oysters, an ‘issue potentially of great concern’. He has shown the effect relates to the naturally high concentrations of zinc in the oysters, not present in non-oyster shellfish, which suppresses the mouse bioassay.

‘It is wonderful news that a team of dedicated government chemists have refined and implemented techniques for protecting humans from shellfish poisoning that means mice no longer have to be used,’ comments Jim Iley, science director of the Royal Society of Chemistry. ‘This is a great example of chemical ingenuity being deployed for the benefit of the wider ecosystem.’