Three negative charges crammed onto carbons in a single molecule 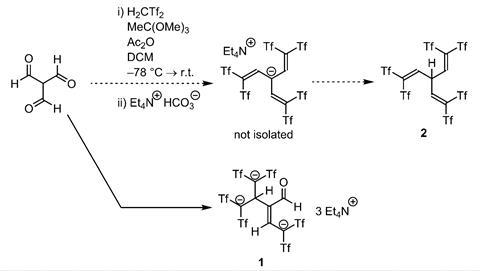 Synthetic route to the tricarbanion – the team were trying to make an allylic C–H acid and accidentally made the unique anion. The exceptional reactivity of carbanions has prevented such compounds being created before

The first organic compound with three negative charges centred on carbon atoms has been synthesised by German researchers.

Carbon atoms aren’t great at stabilising negative charges. Compounds in which carbon has a anion-like character, like tert-butyl lithium, are often very reactive as the carbon desperately wants to share its surplus electron density. Molecules with several carbanions usually need help from electron-withdrawing groups or metals to stabilise their negative charges to prevent them rapidly falling apart.

However, a team led by Benjamin List from the Max Planck Institute for Coal Research has now managed to cram three carbanions into a purely organic molecule. A total of six electron-withdrawing trifluoromethyl groups stabilise the three negative charges. Since the tricarbanion is ‘naked’ – its tetraethylamine counterion is so bulky that the two can’t form a close ion pair – it is extremely nucleophilic and reactive, which could be harnessed in reactions like enolate alkylations.

List’s team discovered the tricarbanion by accident as they failed to synthesise an allylic C–H acid from triformylmethane. The unusual anion raises the question of how many carbon-centred anions a single molecule can accommodate – something the team might explore in the future.