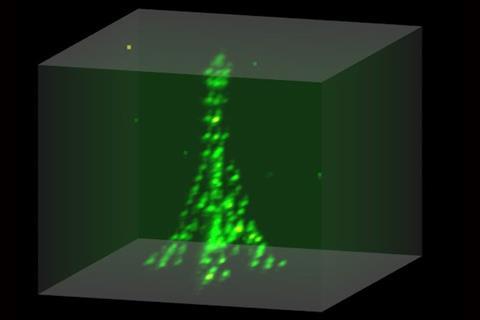 French scientists have used optical tweezers to make an Eiffel tower from rubidium atoms that, despite its tiny size, offers a grand view on chemistry’s future. The University of Paris-Saclay team can create ‘traps’ in ‘almost any desired geometry’, according to team-member Daniel Barredo, and load atoms into them.

The scientists control each atom separately, keeping them a few microns apart and ‘entangling’ them, creating a system suitable for quantum computing. Simulating chemical reactions in such systems is a standout area where quantum computers can surpass their silicon siblings. ‘These defect-free arrays find immediate application for quantum simulation of condensed matter systems,’ Barredo asserts.

Optical tweezers exploit tightly focused lasers, in which light’s oscillating electric field interacts with electrons around an atom, changing how their charge is distributed and forming a dipole. The tight focus forms a field strength gradient, which exerts a force on the induced dipole. Atoms end up at the focus point, where the field is strongest.

Scientists have long recognised optical trapping as ‘a promising platform for large-scale quantum simulation and computation’, Barredo says. However it’s been hard to control neutral atom assembly, leading to partially-filled structures. The Paris-Saclay team, led by Antoine Browaeys, had however already made complete two-dimensional arrays, as has Jaewook Ahn’s Korea Advanced Institute of Science and Technology (KAIST) group.

A quantum of progress

Barredo and his colleagues have now ‘almost accidentally’ found that they can transfer an atom from one trap to another with very few errors, enabling their new ‘atom sorting’ approach. Using a commercial spatial light modulator, they create a 3D pattern in a single laser beam, which includes high intensity regions that can trap atoms.

‘This contains the target array plus additional traps which act as atom reservoirs,’ Barredo says. The reservoir traps end up only half filled, due to the control issues scientists previously faced. ‘To find out the position of these atoms in the 3D array, we take a picture of each plane of atoms.’

An algorithm then identifies where the atoms are, and decides, in about a millisecond, how best to move them into the desired shape. Finally, optical deflectors steer another laser beam that moves atoms from the reservoir traps into place, taking about a millisecond for each. The final arrays are around 100 microns per side, equivalent to a hair’s breadth, leaving plenty of space between atoms. 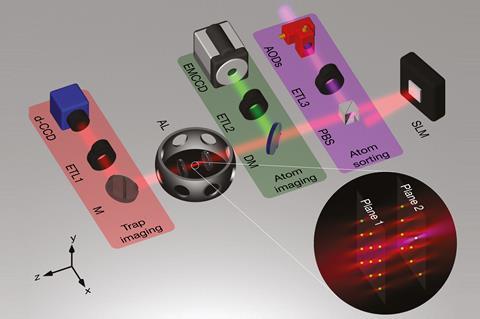 The team used holographic methods and fast, programmable moving tweezers to arrange – atom by atom and plane by plane – initially disordered arrays into target structures of almost any geometry

The Paris-Saclay team also used lasers to excite an electron in each of two trapped atoms to high energy levels, a state where they’re known as Rydberg atoms. The atoms’ excited electrons could exchange spins, showing that they are entangled.

Simon Cornish from Durham University, UK is excited too, saying that physicists have dreamt about single-atom control for many years. ‘Now we have the techniques to not just take a single atom, but to take up to 100 single individually addressable atoms deterministically arranged in arbitrary 3D patterns!’ he exclaims. ‘The level of control exhibited in this work is staggering and, in combination with Rydberg excitation of individual atoms in the arrays, promises to enable great advances in the field of quantum simulation.’

‘These structures are unique and particularly promising as a quantum computing platform,’ comments KAIST’s Jaewook Ahn. Single-atom control offers the prospect of ‘programmable massive-particle entanglement’ never demonstrated in other platforms, he adds.

The approach is very different to Google’s superconducting circuit-based quantum computers, Barredo notes. And the Paris-Saclay researchers are now set to explore just what their method can do, he adds. ‘We are ready to perform the first quantum simulations in tuneable 3D geometries using this platform.’